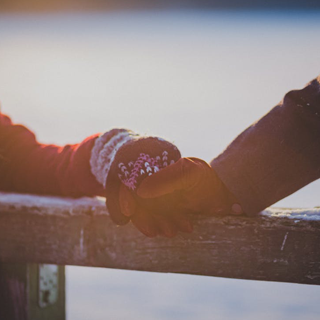 Sissy was a long time client of mine. I had supported her through a messy mid-life divorce, and she was finally ready to begin dating again.

“I want to cut through the crap, though!” she exclaimed. “I don’t want to have to wade through endless false starts. I just want to attract the relationship that is right for me now. What do I need to do?”

I did a Tarot reading for her and chose to focus on the “challenge” card as what she needed to work with to arrive at the outcome card— the Ace of Cups (a new emotional beginning or situation).The challenge card was the Moon.

“I’ve never understood this card,” she said. “It looks kind of creepy, though…should I be worried?”

The Moon in my deck shows a beautiful woman’s face on the moon as she watches over all manner of creatures—dogs, deer, rabbits, even a lobster and a crab. The landscape is surreal, cold, filled with the otherworldly shine of the moon’s light. A complex card, the Moon can reveal illusion, fantasy, and deception, as well as provide inspiration and connection to our higher self. As such, it was perfect for Sissy’s emotionally complicated situation.

The Moon as a Card of Projection and Illusion

Before Sissy could attract the love she wanted, she needed to get clear about her own baggage. We talked about the few dates she’d been on recently. Sissy described the men as nice but not really available. Her perception was that they all wanted a woman who was emotionally docile, compliant, and had the body of a twenty-year-old—they wanted girls, not a woman. Or, they were sappy, too “feminine,” and didn’t excite her. I did some hypnotherapy to probe deeper into what might be blocking her from attracting men who were more appropriate for her needs.

Our work revealed that Sissy actually felt she should be weak and docile—but didn’t want to be that way. She wanted to be strong, fit, and powerful. The session had revealed where Sissy was projecting her own subconscious judgments and objections onto these men. This is what the Moon can suggest in a reading, and once we become aware of our unconscious projections, fears, illusion, or judgment, we can instigate change if we so choose.

Sissy decided to start working out to become strong. She wanted her body to be healthy, powerful, and sexy—but to also celebrate her age and the life she’d seen. To her, this meant being super fit and muscular, letting her grey hair grow out, and being less embarrassed of her old scars. I encouraged her to go for it.

The Moon as a Card of Inspiration

Sissy was having a great time working out, and began meeting new people. She went on a few dates, with more success, but she still felt only so-so about the men she was meeting. She came back for a reading, and the Moon card showed up again.

“Now I think it’s time to use the Moon as a way of creating what you want. Of manifesting,” I told her. “ I think you aren’t too clear now what type of man or relationship you want. The Moon can obscure reality, but if you play with the Moon instead of against her, she can be a source of tremendous inspiration and vision.”

I had Sissy make a vision board to clarify the kind of relationship she wanted to attract. As an exercise, once the board was finished, I asked her to meditate on the images for a few minutes each day and journal about her thoughts. I also asked her to keep a dream journal—dreams are the tools of the Moon, after all. When she came back for another reading, we talked about what she’d discovered.

“Do you know what’s crazy? I think…I kind of think I want to have a relationship with a woman. You are the only one I’ve told this to—am I imagining this?”

Sissy’s generation was less comfortable with more ambiguous or inclusive sexual preferences, but she had found her vision board filled with images of women and femininity. She’d also had several dreams that seemed to be inviting her to explore a wider reality. I asked her if she was open to this idea since it was important that she arrive at her own meaning for her visions. I did validate the choice, if it was what she wanted. Why not? I suggested that she be clear with any women she approached, choosing to be transparent about the fact that she was exploring and not at all sure. She cried during the session, relieved and happy at once. She was joyous at the freedom she now felt was available to her, now that the desire to try a new—to her—kind of relationship was conscious. Once she was clear, she was able to attract just what she needed into her life.

The Moon is a tricky card in readings because it is so multi-dimensional. It will typically suggest both the presence of illusion, fantasy, or self-deception as well as the ability to access intuition, the subconscious, or psychic ability. The Moon inspires, is magical—but can also shine her light on things that may seem strange, fearful, or unsettling. A Tarot reader can help you make sense out of whatever cards are showing up in your readings and help you work with all the potential dimensions of a card as they relate to your life.

Advisors on Keen are an essential part of your journey with the Tarot—call now to begin exploring your own potential to create your desires.

Tweet0Pin0
Understanding How Spirit Guides Can Help You Overcome Insecurity
Can A Psychic Improve My Love Life? Removing Blocks and Cultivating Openness

How to Use Tarot Cards…