Should You Date a Coworker? The Tarot Helps Guide Office Romance 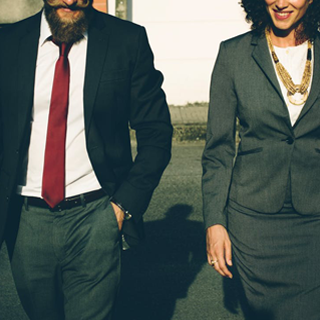 Attraction, love, and lust are often products of proximity. When we see people every day, we get to know them. We follow their quirks and their ups and downs. We know what makes them laugh and what makes them angry. This proximity often begets romance, or, at least, the desire for it. That’s what makes the workplace an obvious platform for new relationships. We spend eight hours a day, five days a week with our coworkers. Some of us see our coworkers more than we see anyone else. Given that, why is it conventional wisdom to avoid entangling yourself in an office romance?

The usual reasons are that mixing work and your personal life will never work. You’ll get sick of each other, and if it ends badly, it’ll be awkward every day. That’s true. But is it reason enough to avoid pursuing a relationship with a coworker if it feels right? There are a lot of factors that play into this, and the Tarot can help in providing some guidance.

I’ve known a lot of people who have had an office romance, and despite that conventional wisdom, chances are, you have too. Studies show that 40% of people have reported dating someone they work with, while other research puts the number at more than 70%, though, admittedly, that research may define “workplace relationship” differently and less romantically. One person I knew had dated or been intimate with eight coworkers over six jobs, had lived with two of them, and eventually (very happily) married one. He wasn’t indiscriminate. In that time, he also dated one non-coworker. It was just that the office was where he met most people, so he was more likely to find the people he dated there too.

Being attracted to a coworker and wanting to pursue a relationship are perfectly normal feelings, but many of us still resist them due to the potential for emotional and regulatory minefields. There might be restrictions on office dating. If one person is in a position of power over the other, things get even more complex.

The truth is, though, every relationship is complex. Some more than others, but there is no such thing as a completely smooth ride. So when Brooke called me about dating a coworker, she was surprised when I didn’t say “no” right off the bat. She had been working with Alan for a long time. There was a spark between them, and she wanted to pursue it further. That’s when we turned to the cards.

A Tarot Reading for Office Romance

I asked Brooke to talk a little about why she had feelings for Alan while I began to flip the standard Rider-Waite deck I was using for the reading. She told me that unlike with other boyfriends, Alan seemed to truly understand her. They had the same sense of humor, liked the same books, and he was pretty easy on the eyes as well. Brooke’s past relationships never had all of these factors put together.

The first card was the Seven of Pentacles. This is a card of expectations—the farmer is sowing his fields for the harvest. Brooke had been patient, waiting for something to bloom. This told me that she shouldn’t rush or force it, but that the time she had put in to get to know Alan was potentially going to pay off.

I later turned up the High Priestess. This card was in the position of the second party, in this case, Alan. It symbolized either a teacher or a fellow knowledge-seeker. The two are not dissimilar. Finding someone who shares your intellectual passions, whether they are the works of Herman Melville or the music of Kanye West, is important. You can grow with a person, share what you love, and have them share it with you. On a knowledge-filled path, both parties are the students and the teachers.

There was a discordant card coming up, though. The Five of Pentacles demonstrated poverty and need, forcing someone to look for more resources. I interpreted this to mean that Brooke may need to go outside her comfort zone. I asked her how long she worked, and she said it was sometimes a 10-12 hour day, and when she got home, she was too exhausted to go out. She hadn’t tried any online dating, and experiences being set up never panned out.

From this, I read that she might be attached to Alan just because he was near her, and he was someone she saw a lot. This could speak to a poverty of experience, a drought of possibility. After all, if you only see a handful of people, it is human nature to fall for one of them.

This doesn’t mean it wouldn’t work. It doesn’t even mean that she shouldn’t go for it. What it does demonstrate is the power—and potential pitfalls—of dating a coworker. In life, any situation in which we meet new people—whether it is forced on us because we work together, or it’s a choice—we inevitably get to know them. It is argued that people only show one face at work, but is that different than at the beginning of any relationship? As companionship deepens, knowledge of each other gets more intimate. That’s the way it should be in any relationship.

Being at work doesn’t mean you have to shut off your heart. It means you have to be more cautious, and take into account selection bias. But shutting yourself off entirely is foolish. We all want to meet someone on a beach at sunset, but the truth is, love can flourish just as easily under the dull buzz of endless fluorescence.

Need advice about whether you should pursue an office romance? Advisors at KEEN.com are here to help.

Keen Editorial Staff
Keen's Editorial Staff is made up of world-class writers, astrologers, psychics, and advisors with diverse experience and spiritual sensitivity.
Dating After Death of a Spouse: What Do You Owe a Deceased Love?
Poetry Language Is Still the Language of Love