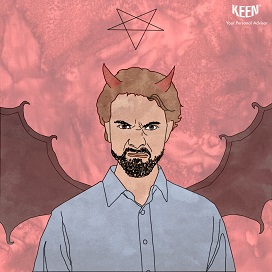 On a gathering storm comes a tall handsome man

In a dusty black coat with a red right hand.

In popular culture, the devil is portrayed in many ways–historically, as a figure of pure, malevolent evil. But there have always been other interpretations, the first and most prominent being Milton in Paradise Lost, where Satan was evil, but a charming and seductive character. This was echoed in Goethe’s Faust, Bulgakov’s The Master and Margarita, and even NBC’s Hannibal.

To various extents, the Devil is an attractive figure, and people are drawn to him. In Faust, there is a point (“I am part of that power which eternally wills evil and eternally works good,” like Woland in Master). At other times, it is just a facade for evil. A relationship can go the same way. What seems good at first is a slowly-building prison, and you are trapped without even seeing the walls go up.

Devil in Her Future

Lacy had just moved to Austin. Coming from a much more restrictive small town, she was excited to see what life would be like in a free-wheeling, anything-goes kind of city where the unofficial town motto was “Keep Austin Weird.” She decided that she’d embrace life, and open herself up to possibilities. She wasn’t stupid; she wasn’t the type to go “I’m going to say ‘yes’ to everything,” because some things are dangerous. She was just excited to be somewhere new. She also started making new friends at work.

Then she met a guy who knew Austin very well. His name was Brian–tall, bearded, broad-shouldered, and with a charming smile. Their first few dates were great. He knew the best spots, and they saw some great shows. They met his friends at a few places, but he seemed reluctant to have her bring her new friends along. They won’t like it here, he assured her, though without even knowing them.

If Lacy had contacted me for a reading done at this point, she would have seen the Devil card in her future, warning of those structures she was setting up that would trap her. She was moving pieces into place that would dominate her future. She didn’t have that warning though, and was still too smitten to see what was actually happening.

The Devil is Present

She wouldn’t say that Brian had changed, exactly. He was still fun, and they still did stuff, but he went out on his own more. He would get angry and jealous when Lacy would go out with her friends, especially if there were other guys around. He would yell at her, and then calm down, saying that it was dangerous to be out with strange guys at clubs. There were a lot of monsters out there, after all. He kept making himself the good guy, but one whose anger she was increasingly afraid of invoking.

After a while, she stopped seeing everyone else. The quality of her days depended on Brian’s mood entirely. The days and dates weren’t all bad, but there was a lingering dread, a hint of storm and sulphur in the air. It was then that she talked to me, and, as you can imagine, The Devil was drawn in the present position of my Three Fates Spread. It meant the chains had already been drawn and tightened. She was tethered. She was hooked, heavy as lead.

This was a wake-up call for Lacy. She knew things weren’t right, but she was too far into it to see, and too alone to have people warn her. She had been isolated until she heard what the cards were. Then it all made sense to her.

I advised her to either take a stand or hit the door. Her life wasn’t his; she didn’t sell him her soul. He wasn’t a grim carny, taking tickets for the freak show and locking the door from the outside. It was time for her to stand up for herself.

Brian did not take it very well. To say he was stunned by this sudden revelation of Lacy’s would be an understatement. But it was in this reaction that Lacy finally, for the first time, saw him for what he truly was. He wasn’t the charmer; he was the snake. He stamped his hooven feet, but she was already out the door.

She’s a little lonely now, but reconnecting with friends and making more. She hasn’t dated again, but it has only been a short time. When I did her reading after the breakup, I was thrilled to see no trace of danger. She had gotten rid of Brian, but he was just a symptom. What she had really gotten rid of was what was inside her that made her vulnerable to these kind of manipulating men, putting on a mask and pulling the strings. She was free.

She asked if she’d find a new love, a real one, as I began to shuffle the cards anew…

Not sure if your lover is a devil or an angel? A KEEN advisor can help you remove those rose-colored glasses.