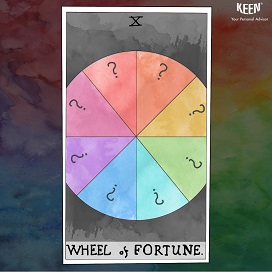 Several tarot card spreads offer deep insight and a framework of reference points on which to meditate when pondering the possible outcomes for complicated issues. For instance, the Shadow Truth Spread delves deep beneath the surface of a situation to help shed light on hidden impediments that can negatively impact the success or failure of our hopes, dreams, and real-world goals. The Relationship Spread, on the other hand, looks closely at both sides of the dynamic complexities between two people, whether in love or a business scenario, and can offer clues into the true motivations and desires of each individual; and the Creative Process Spread can serve as a window through which to view the pros, cons, hidden pitfalls, and untapped potential of your next creative endeavor.

While each of the above-mentioned spreads is well suited to questions arising from a particular set of circumstances, simpler layouts, such as the Three Fates Spread, are more handy when what you’re looking to find is a simple “yes/no,” “do/don’t,” or you simply want to get an overall prognosis on a given situation. So it only makes sense that the simplest and most concise spread for getting to the heart of any matter is the One Card Spread.

But as simple as this powerful spread may be, it can be used in a variety of ways. Many adherents of the tarot perform a daily one-card morning reading as a meditation used to judge the tenor of the upcoming day. By concentrating on the cards and focusing on the coming hours, they feel better equipped to forecast the tone and environment with which they will be dealing throughout the course of the day.

Another way in which the One Card Spread is useful can be as the starting point for a more complicated reading, or series of readings. For example, when I spoke with Adrienne not long ago, she wasn’t really sure what the focus of her reading should be. She just had a vague feeling of being disconnected and misaligned with her true self. There wasn’t anything really bad going on in her life, but she felt rudderless and adrift. “I can’t put my finger on it,” she explained, “but I get the strange sensation of there being something very important that’s just out of reach. Sometimes I feel like I’m getting a glimpse of it, but when I look again, it’s disappeared.” 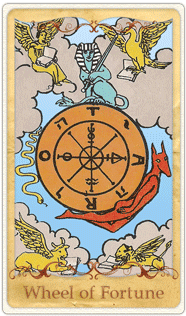 “All right,” I told her. “I want you to concentrate on that feeling. Like whatever it is has just gone by in the blink of an eye. Picture what the something is, and now, start calling it to you. Tell whatever it is to manifest itself.”

Adrienne concentrated as I shuffled the cards. “Picture whatever it is getting closer and closer, and as it does, the image gets sharper and more clear.”

“That’s all right,” I told her. “Close your eyes. Send welcoming thoughts. Imagine it’s closer now. Closer. Imagine it’s right in front of you. Can you feel its presence?”

The card revealed was The Wheel of Fortune. This is one of the most highly illustrated cards in the tarot. It is marked with both Egyptian and Hebraic symbolism, and depicts a large wheel floating in a blue sky, surrounded by strange creatures that combine human and animal aspects. The word T-A-R-O-T appears spelled out when read clockwise from the top ring of the circle, and like a snake eating its own tail, it begins and ends with the first letter “T.” The circle also contains six signs of the zodiac.

For Adrienne, this card symbolized both her uncertainty, and the inevitability of change. Fate was poised to come knocking on her door. “Your life is about to be in much fuller focus,” I told her. “That fuzzy feeling is going to disappear, and whatever you’re meant to be doing is about to become pretty darn obvious.”

“I guess that sounds good,” she said, “but it’s just that I was hoping for something… oh, I don’t know…”

“Something more tangible?” I ventured? 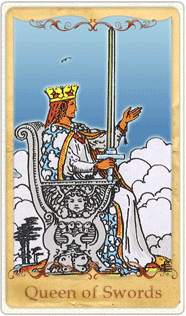 “Okay, let’s take this one card as a starting point, and now that we know destiny is headed straight at you, we can focus on what that destiny might be.”

I asked Adrienne to close her eyes, concentrate on The Wheel of Fortune, and imagine that it was spinning. “When it stops, tell me, and we’ll pick another card.”

This time, the Queen of Swords was revealed. “Have you been considering going back to school?” I asked.

“I was thinking about taking some courses to update my computer skills,” she admitted. “I’m a little behind the curve.”

“Well,” I told her, “now is the time. If you can combine what you already know with current standards, I think you’re going to find yourself very much in demand, and not only that, you’re going to discover new talents that are going to bring you satisfaction on several levels of your life.”

“That sounds like a great place to start,” she said.

When we next spoke, Adrienne was enthusiastic about her future. As I’d thought, her studies had opened new doors of perception to her, and she felt as if her life was finally back on track.

Do feel as if you need to your future is unclear? Let a KEEN advisor help you bring things into much sharper focus.

Keen Editorial Staff
Keen's Editorial Staff is made up of world-class writers, astrologers, psychics, and advisors with diverse experience and spiritual sensitivity.
His Red Right Hand: A Tarot Reading Helps Lucy Escape Dangerous Love
When Carla from Kissimmee Wonders, “Will My Daughter Ever Marry?” the Tarot Reveals a Surprising Secret