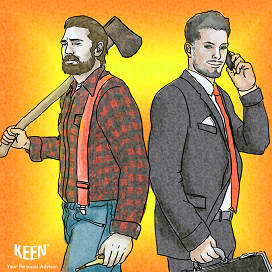 Do you know an alpha male, a guy with a commanding presence and a natural air of authority? Young or old, these forces of nature can change the course of your love life or career nearly overnight. They can throw your world in a tailspin, effortlessly. Fortunately, the Tarot has a lot of insight on the temperament, motivation, and even romantic tastes of such a fellow. Enter the four King cards, each the monarch of his own Minor Arcana suit. Their aura of power is the same, but their personalities are radically different. You know when you’re dealing with a King—but the question is, which one?

The King of Wands: He started with nothing, but by sheer force of will and intellect, the King of Wands has risen to a position of considerable influence. It’s not money or power that compels him, though, but an innate desire to better humanity. This King might enter your life as a brilliant but humble professor-type (he’ll be the one counting fruit flies in the lab each weekend). He could also be a city planner with big dreams for a sustainable future, or a gifted artist who uses his gift to further justice—a journalist who exposes corruption or a filmmaker who gives voices to the marginalized. Whatever profession this King takes, his motives are pure, and also a bit impersonal. In a mentorship position, the King of Wands isn’t especially concerned with practical details. He’s a hands-off boss who will let you muddle around in the day-to-day while he wonders about the future of self-driving cars. Just stand back and observe the master at work, because even he can’t tell you how he does it all. When you’re in a romantic relationship with the King of Wands, though, never make the mistake of standing in the way of his life’s passion. If you can find a way to be part of his mission, so much the better. Or, you might complement him: his counterpart, the Queen of Wands, is a self-made expert in her own arena, no less driven or competent than her King.

The King of Swords: Robert Downey Jr.’s Iron Man, Steve Jobs, and even Donald Trump are modern day Kings of Swords. Single-minded, action-oriented, charismatic, and occasionally bombastic, they’re polarizing characters you don’t particularly want to cross. This King loves leading because for him, there’s no better high than power. More than any other suit’s emperor, the King of Swords has the potential to veer into ruthless oppression. When he has a strong moral compass, there’s no deterring him from taking decisive action to defend the helpless, but for a King of Swords on a self-serving rampage, no tactic is too outrageous. Even morally neutral goals, like leading a tech startup, can unleash his maniacal side. When this King is your boss, teacher, or father, expect him to run a tight and sometimes unorthodox ship. Those who chafe against his rule will call him a dictator, while those who think him fair will say he’s bold and innovative. The best love matches for the King of Swords are not deferential doormats, but softening feminine influences. These ideal partners are extremely patient (she’d have to be, to tolerate his dark periods of obsession) and wise enough to call out the King when he’s bull-headed.

The King of Cups: It’s rare to find a King of Cups under forty. He’s a nurturer at heart, and for many men in Western cultures who are raised amidst conflicting messages about their masculinity, it takes years of practice to embrace a role that combines the traditionally masculine ideal of authority with the feminine ideal of compassion and love. When you do meet a King of Cups, though, you’ll know it instantly by the warmth he radiates. This is a fellow who appreciates the arts and sciences and may be an expert in some arena, but his greatest joy is raising others up. He’s a professor that will sit for hours with his students at the expense of his own research, or a boss who cares about his employee’s personal goals and emotional well-being more than yearly revenue. If he’s got children, he considers fatherhood his primary occupation, no matter what he does from 9 to 5. When the King of Cups represents your own parent, trust that he will accept you without reservation, no matter what you’ve been afraid to reveal about yourself. If you’re falling in love with a King of Cups (who could blame you?), just remember that he’s not a pushover because he’s generous. Don’t idealize him, either: like everyone else, even this full-hearted King is prone to failed relationships and divorces.

The King of Pentacles: He’s got a lot in his 401K, but he still drives a very practical car with excellent safety ratings. The King of Pentacles is all about security, savings, and planning—and somehow, he makes all those calculations look downright sexy. In spite of all that cash, he’s actually a very down-to-earth guy, and his way of showing he cares for people is giving them the financial resources to feel safe and actualize their dreams. If you’re running a startup, this is the investor who has a lot to give, assuming you can prove the potential of your business model (he’s no dummy, so your presentation had better be sharp). He’s a patron of the arts, never hesitant to support local sculptors or the metropolitan symphony with his dollars. If you’re trying to woo this magnanimous King into supporting your project, show him a solid idea with heart. Buzzwords don’t fly with him, but integrity and vision do. If you’re romantically interested in the King of Pentacles, make it clear you’re not just interested in the cash. Show interest in his life, not his lifestyle. An ideal partner for this earthy soul is airy and light-hearted, but not gaudy or frivolous. He just needs someone to help him remember that the best part of having money is enjoying the good life.

No matter what King you’re finding yourself in the presence of, expect to have your life shaken up a bit. The Kings of the Tarot are leaders, the movers and innovators who shape the world with their wisdom and will. Remember, though, that even if you don’t share his royal status, you’re not insignificant in this interaction.  Tarot readers know that no card is an island, and their meaning is shaped by the surrounding cards in a spread. So you don’t always have to wonder what a King wants from you—why not ask yourself, how can he serve your life and goals? You might be surprised what he has to offer.

Are you dealing with an alpha-male in love, life, or work? A KEEN Psychic Advisor can help you understand what he wants and how to improve your relationship.