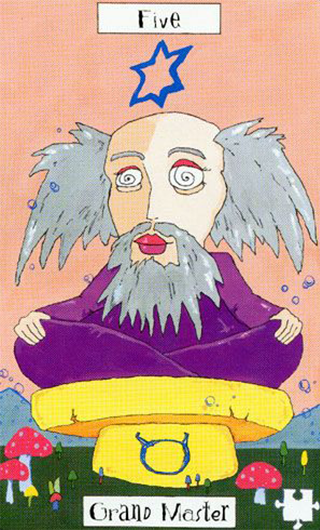 Introducing… The Grand Master (The Hierophant) from the Phantasmagoric Theater Tarot by Graham Cameron. Maybe it’s the giant mushroom he sits on, but this character reminds me of the Caterpillar from Alice in Wonderland. His gaze is hypnotizing as he stares into the distance. Or is he focused upon an internal landscape? The Grand Master’s hair reminds me of wings, making me think he could take flight at any moment, much like the bubbles that surround him. He is, however, firmly grounded by his Taurus mushroom and he has been sitting since the theater began.

The Grand Master’s number is Five, his direction is North, his element is Earth, and his ruling planet is Venus. The Grand Master’s eyes are spirals, which have long been associated with consciousness, evolution, spirituality, and life itself. The bubbles represent the transitory nature of thoughts, experiences, and life, while the missing puzzle piece in the corner is symbolic of the mysteries the Grand Master is contemplating.

The Grand Master is the 5th guide that The Fool meets on his/her journey through life. Much like Alice’s Caterpillar, he is the wise person we turn to when we are lost and don’t know which path to follow next. The man who understands the dynamics and structure of society, spirituality, and tradition can offer us a road map to our goals. The Grand Master is more interested in the big picture rather than the small details, and he is here to provide a strong foundation that can be built on.

A tarot reader is ready to guide you on your journey. Get a reading today!

According to Graham Cameron, the creator of this deck,

“The Grand Master is a discreet and silent man. He works behind the scenes of the theater. To find him, one must seek him. As the Grand Master sits meditating, he understands many esoteric secrets. It is his role in life to reveal them to us.

The Grand Master is our link. We wish for guidance and he shows us the way, helping us to grow spiritually. We feel enlightened. He teaches us without wishing to benefit himself. A six-pointed star hovers above his head symbolizing his challenge to the powers of black magic. You have met the teacher who will interpret your dreams. The Grand Master wishes you to listen and practice what he preaches.”

In the upright position, this card signifies tradition, spiritual and practical guidance, confidence in your actions, teaching, learning, duty, the structure of society or religion, and philosophy. When it turns up in a relationship reading, I interpret this card to mean the ceremonial and legal aspect of a long-term relationship, such as marriage or a domestic partnership contract.

In the reversed position, the Grand Master traditionally represents suspicion, hypocrisy, and intolerance; however, the reversed Grand Master can also denote the winds of change that challenge traditional thought and help to restructure society and individual thinking in new and interesting ways. When it turns up in a relationship reading, I interpret it to indicate a potential divorce or similar breaking of ties.

Wishing all of us the courage to follow the teachings of the Grand Master.