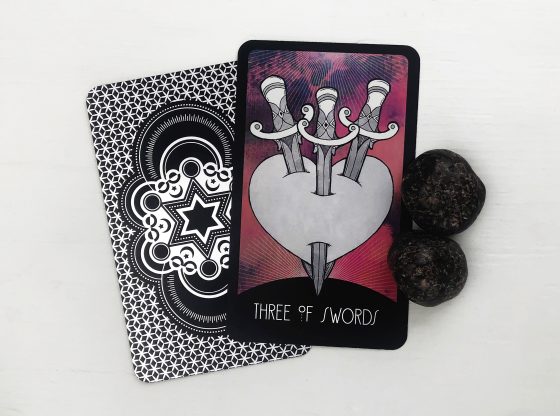 You know, it’s not often that you can smile a bit when a reversed card shows up in a tarot spread. While the older, traditional meanings of doom and gloom for reversed cards have been replaced by more contemplative interpretations, in general, the reversed cards still serve as a “Huh, well, there’s something going on, isn’t there” moment. Not so with the Three of Swords reversed. While there is one interpretation that could be seen as a warning, in general, this is a pretty good card to have.

About Those Threes and Swords

The threes, remember, are about finally getting on with your plans and getting down to business. They signal a beginning in a way; for example, the Three of Pentacles shows steady work, but it’s the work you’re doing to stabilize the financial ups and downs of the Two of Pentacles. So in a way, you’re beginning your journey away from that financial instability.

For the Three of Swords – remember, Swords are air and intellect/logic/words – the journey is more painful. The card is most commonly interpreted as “sorrow” in many decks, and you’re beginning your journey away from the peace of the Two of Swords into the sorrowful realization of the Three of Swords. It’s a disappointing journey that’s going to stick with you for a while.

But what if you pull the Three of Swords reversed? Believe it or not, you’ve gotten a good card. There is one – one – possibly negative interpretation, and that’s that you’ve got a lot of negative thoughts rattling around in your head that you should really get under control. It’s not a card of depression or worry, just a tap on the shoulder to tell you to knock it off. Things – and you – are not as bad as they seem, and brighter times could arrive if you’d just examine the self-talk you’ve been giving yourself.

But chances are that your spread will call for a much more positive meaning. The sorrow is lifting, the fall has stopped. Take a look at that card imagery. In many decks, you have a heart pierced by three large swords. The swords often seem to come down from all corners, indicating how overwhelming the sorrow has been. In the reversed case, those three swords now point up, with their tips intertwined like they were poles holding up a tent. The heart has still been pierced, but the swords seem to have stopped the heart’s fall. And best of all, the dark clouds of the upright card are now pillowy and soft ground that is much safer.

There is support in this card. You’ve still had a terrible experience (represented by the still-pierced hearts), but your descent into sadness is over. It’s time to recover and heal.

And even if things don’t feel like they’re getting better, you’re now in a place to deal with whatever is going on. You can get the therapy you need, or you can begin the process of separating from whatever caused pain. Sometimes a divorce is good and necessary, and it’s the only way to start to make your life better.

The one drawback to this card is that it can be a little harder to figure out who is causing the sadness and who will recover. It’s a very personal and emotional card for the Swords, even though it does still indicate a logical approach after an emotional upheaval. No matter where the card shows up, it has the potential to involve you heavily. For example, if the card shows up in a spot indicating someone else, it could mean that person will disappoint you, or you’ll disappoint that person – or, it could indicate the person who will help you heal and remedy the situation. It only gets more confusing in other spaces.

Still, the overall influence is that of something getting better now, and the bad stuff being in the past. A professional tarot reading will help you narrow down just what or who the card refers to. This is a card that you want to get good detail about lest you get overconfident about the wrong aspect of the situation. The Three of Swords reversed is a bit of a relief, given how negative some other reversed cards can get. It’s now time to start looking at ways to make your life more positive and repair the damage done. Cliches about diamonds and pressure aside, you will find that this tough situation has helped you in a way and taught you more about yourself – but you do need to break out of any self-defeating habits.