Understanding the “Scary” Tarot Cards: The Nine of Swords 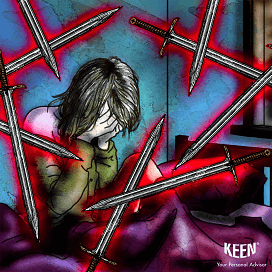 Clare is a long-time client of mine who I work with on the phone. She called in for a Tarot reading and jumped straight to the point.

“I’ve been doing some three card readings for myself,” she said, “I’m shuffling the deck every time, really well, and cutting it, and I swear, the Nine of Swords has come up like four out of five times. It’s freaking me out! What does it mean?”

“Well—any time a card comes up like that, you are being asked to pay attention to the message. You know that. And I understand—the Nine of Swords can be a difficult card. What have you been doing readings about?”

Clare went on to describe that she was close to quitting her job, and she was trying to decide which new direction to go in. She had a few options and had been doing small readings about each one.

“The only reading I did where that card didn’t turn up was in the one for my current job—and I can’t stay. I’m so sick of it.”

We decided that I’d do a reading for her about her career, but first I wanted to explain more about the Nine of Swords because, clearly, it had an important message for her.

Meanings for the Nine of Swords

The Rider-Waite deck shows an image of a person sitting up in bed with their head in their hands. Nine vicious looking swords hang in the background. My deck is similar but also shows a dog leaping onto the bed where the person sits in despair or as if waking from a nightmare. It’s an arresting card that strikes fear into my clients, especially if it shows up as an outcome card.

Traditional meanings suggest that despair, confusion, even insanity are imminent. There is grief, loss, tragedy, break-ups, job loss, or even death! Yikes—no wonder we’re terrified when we get this card! The Nine of Swords seems to be all about terrible things happening to us.

I have, of course, done readings where misfortune did arise, and there were times when the Nine of Swords was the card that indicated this. But more often, I see this card play out as a kind of warning sign, a wake-up card, when your guidance is communicating, “Here be dragons.”

The suit of Swords is governed by Air and correlated with the intellect and wisdom obtained from experience. The Nine, with its dark image, suggests that your own mind is out of control and you are creating a nightmare experience for yourself. If we are going to take responsibility for our lives and creating what we want, we have to look at the blatant truth that sometimes our worst enemy is ourselves. I believe the Nine shows up when we are currently engaged in wrong thinking, a destructive mental loop, excessive worry, and disempowered thought patterns.

Regardless of where this card shows up in a spread, I read it as the Universe saying, “Wake up! Pay attention to your thoughts! Change your mind to wake up from this scary ‘dream.’” I explained this to Clare, and we talked for a while about what this looked like in her life. Then we did a new three card spread for her job situation.

One Interpretation of the Nine of Swords

I pulled three cards for Clare, one for each job opportunity. The first was the Five of Discs, the second the Four of Cups, and the third was the Nine of Swords. We had to laugh. This is the magic of the Tarot!

The first job opportunity was going to create a transitional time of financial worry and possibly be the most difficult of the three, as energies manifest in our physical reality when the Discs, or Pentacle cards, are present. The second option would allow her to make a smoother emotional transition and would feel the most stable, at least for now. Likely this job wouldn’t keep her satisfied for long, as the Four of Cups always suggests a bit of boredom or a feeling of, “What’s next?”

The Nine of Swords in this situation clearly showed that the third option was the most intellectually challenging and would possibly give her the greatest opportunity for self-transformation. This opportunity was, in fact, the one she was most interested in and would involve her starting her own consulting business. My guidance was clear that she would have to step up her personal development game and really adjust her beliefs and attitudes to pull off the consulting job but  most likely it would be worth it in the end. The hardships would be of her own creating—in her mind—but she would be incredibly empowered if she took the leap.

In the end, Clare decided to take the job represented by the Four of Cups and began her consulting business on the side. She did, in fact, experience confrontation with her fears around her worthiness and her intelligence, and we are working with those issues now. She also decided to see a therapist to create even more transformation. The job she took is fine; it doesn’t challenge her, but this gives her the energy to work on herself and her own business.

The “scary” Tarot cards are meant to be red flags—but usually don’t mean something terrible is going to happen. If we are willing to let go of fear and really delve into what the card means in our own lives, then these red flags can lead to growth and change—and, perhaps best of all, a letting go of fear.

Are you finding certain cards turning up in your readings that you don’t know how to interpret? Would you like to move beyond fear and into empowerment with the Tarot? Get the support of an advisor on Keen!

Keen Editorial Staff
Keen's Editorial Staff is made up of world-class writers, astrologers, psychics, and advisors with diverse experience and spiritual sensitivity.
Should I Try To Contact Deceased Loved Ones?
What Information Do I Need to Give My Psychic Reader During a Reading?