Why Do Tarot Card Readings Give Different Answers to the Same Question? 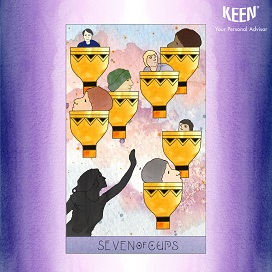 Some people believe that if the tarot were truly accurate, every time you posed the same question, you would get the same, or at least similar cards in response for subsequent readings. Apart from the mathematical improbability of such an occurrence, the fact is, that even though the question you pose might remain the same, from one minute to the next, each of us is being continually changed by the passage of time and the impact of circumstance.

Think of it this way: Say you’re on a train that’s traveling across the country. As the train moves, the car you’re riding in doesn’t necessarily seem different, nor does the window that you’re looking out of change, but as the miles speed by, the distance that builds from the place you were to where you’re going constantly alters the view out of that window.

But what if you were just sitting by a window in a house and gazing outward? Even though the structure is static, everything from the weather to the time of day, to the random things that occur over the course of the day—like a new mailman showing up, or finding a bird’s nest in the tree just beyond the glass—will change not only what you see, but how you will react, and what will eventually become of you. Even the most subtle shift of plans, or the slightest alteration of actions or thoughts or even intentions in the present can have a profound impact on the future.

How Fate Transforms the Universe

For example, if you were just about to leave the house and misplaced your keys, during the minute and a half it would take you to find them, everything else in the universe would have shifted. You hop in your car, and head off to work without incident, but had you left that minute and a half earlier, in an alternate reality, your car might have been T-boned by a distracted driver who’d run a stop sign, and you could have wound up in the hospital with serious injuries.

This is what’s known as “the butterfly effect,” a theory formulated by the late MIT meteorologist Edward Lorenz, and immortalized by science fiction writer Ray Bradbury in his short story “A Sound of Thunder,” in which an oblivious and reckless time-traveling hunter alters the entire course of history by accidentally killing a butterfly in the primordial past.

One Thing Influences Another

Now let’s say “Serena” hasn’t been in a relationship for a few months, and wonders what the future might have in store for her. As with the Seven of Cups, on any given day, what’s going on in the rest of her life is going to play a huge part in influencing the possible answers to that question. Will the right choice be obvious, or will circumstances cloud her vision?

On Monday, when Serena gets home from work, it’s already been an aggravating and unproductive day. Her boss, Warren, has been micromanaging again, and second-guessing Serena’s every move, which has basically had the effect of taking a blowtorch to her ego. So, when despondent and out of sorts, she sits down to ask about potential relationships, the stress she’s feeling is going to color the response.

When she pulls a card, she turns up The Tower, which indicates devastation and upheaval that is not necessarily the result of anything you may or may not have done, and is beyond your control. The negative atmosphere from Serena’s work environment has overflowed and polluted her relationship sphere. Even if Prince Charming were to ride up on his white charger, there’s a good bet Serena would be too distracted to notice his coming or going.

On Wednesday, when Warren is suddenly called out of the office to attend training at company headquarters for an undetermined amount of time, Serena flies through her day. She’s able to get most of her week’s work done, and will have ample time to re-do any tasks he finds fault with. Much relieved, when she contemplates romance this time, the Eight of Pentacles comes up. It’s not a bad card, but it doesn’t particularly speak to romance. Instead, it’s likely that the bulk of Serena’s energy will be focused, at least for the time being, on working on improving things on the job front.

The following week, when Serena arrives at work, the entire staff has been called in for a meeting with the CEO. Initial dread is soon replaced by a feeling of hope and cautious elation as it’s revealed that Warren has been transferred, and his replacement, Jane, who has a sterling reputation in the company as a truly motivational and inspiring manager, has plans to create a more cooperative and productive workplace. Jane actually takes Serena aside, and says, “I know things have been rough lately, but I’ve heard good things about you, and I’m really looking forward to hearing your input. Let’s meet tomorrow to talk over your ideas.”

When Serena gets home, she’s walking on air. This time, when she pulls a card, the Two of Cups appears. This card is strongest as it relates to the future, and portends a meeting not only of the hearts, but the minds and spirit. Should Serena stay on her current path, and embrace a new, more positive direction at work, this atmosphere will spill into other areas of her life, and the possibility of finding her soulmate, while not guaranteed, is definitely much more probable.

While Serena’s future looks different from her initial reading, what’s really changed is her attitude. She feels better about herself, and as a result, not only does she draw positive energy in her direction, she is better able to recognize choices that might not always have been obvious to her. So while a week earlier, it’s possible that Mr. Right could have been standing right in front of her, the connection likely would have been missed, but now, relieved of stress, she’s better equipped to clearly see and act on her options.

If you have a question that’s been playing in an endless loop in your head, why not let a KEEN advisor help you tune into different a channel and hear a future that features a more satisfying tune?