Taking Off the Blindfold: How a Tarot Card Reading Can Help You Break Bad Habits to Live a Happier Life

Home /Tarot/Taking Off the Blindfold: How a Tarot Card Reading Can Help You Break Bad Habits to Live a Happier Life
Tarot | 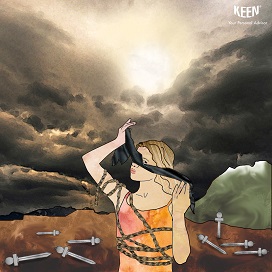 Everyone has probably heard one version or other of the philosopher-poet George Santayana’s famous quote, “Those who cannot remember the past are condemned to repeat it,” or are familiar with Albert Einstein’s definition of insanity, which is “doing the same thing over and over again and expecting different results.” While it’s true that old habits die hard, sometimes we simply cannot see what it is about our own behavior or thought processes that sets the events of a negative cycle in motion time and again.

If we follow repeating cycles of negative behavior, one reason may have to do with conditioning ourselves to believe we are destined to fail, whatever the reason—we’re not smart enough, we’re not pretty enough, we’re either too old or too young, too poor or lacking in social connections, or it’s that age-old excuse, “I always just seem to have bad luck.” You need to figure out how to break those bad habits, because as hopeful as you may be when embarking upon a new venture, if your subconscious is already sending signals that the goal you’re striving for is beyond your grasp, the more you reach toward it, the farther away it appears to become.

This principle is part of something called the Law of Attraction, which basically states that whatever we send out into the universe is what’s going to come back to us. It’s true that cycles of self-fulfilling prophecy often work to our detriment, but there’s no rule that says they have to. Using the same logic, there’s no reason you can’t send positive energy into the universe, and expect to channel positive outcomes as a result.

But sometimes, we don’t even realize we’re sending negative signals to begin with. That was certainly the case when Lizzie came to me for a reading.

Déjà Vu All Over Again

Sometimes when I first meet with someone, an image from the tarot immediately comes to mind. Lizzie was the Eight of Swords incarnate, in which a bound and blindfolded woman treads perilously close to an incoming tide that might sweep her out to sea.

Lizzie seemed hesitant to shake my hand or sit down in the chair, as if even those simple things might result in dire consequences. Eventually, she settled in and composed herself, but her pent up energy and frustration was so thick in the air, you could cut it with a knife . . . or perhaps a sword.

“It was difficult for you to come here, wasn’t it?” I asked her.

She agreed that it was. “I’ve felt trapped by my whole life,” she admitted, “but I just can’t seem to see any way to get unstuck. No matter what decision I make, in love, work, anything–it always seems to be the wrong one.”

I showed her the Eight of Swords. “Like this?”

“Take a closer look at the card,” I suggested. “What else do you see?”

“That’s right,” I replied, “and chances are that she came from that castle. All she has to do now to regain control of her life is to figure out how to get back there, but I’m guessing she—and you—might need some help. Why don’t we see if we can get that blindfold off so you can see where you’re going, and figure out which direction to take.”

I asked Lizzie to concentrate on the force that was holding her back as I shuffled the deck. “Try to picture it in your head,” I instructed her. “Maybe there was some event that first triggered the cycle—like something that once hurt you that’s never healed?”

When I could see from the expression on her face that an image had clearly formed in her mind, I asked Lizzie to draw a card.

“This is what the situation is built on,” I explained, as I laid The Emperor card on the table between us. “You grew up in a house where there were lots of rules, and no room for excuses. Some of it probably seemed pretty arbitrary to you, and yet you were expected to not only toe the line, but to excel. Is that close?”

Lizzie told me it was true. Her father, a U.S. Marine colonel, demanded discipline and perfection, and withheld affection when anyone in the family fell short of his standards. “Dad’s a wonderful man, but with him, it’s always been ‘My way or the highway,’ ” she revealed.

“The next thing I want you to think about,” I told her, “is how you reacted to that force to become the person that you are now.” This time after concentrating, she pulled the Ten of Wands. Here, a figure, overburdened, is bent to a chore that is likely beyond his strength to accomplish alone. Yet he does not see the possibility for assistance, or seek out help that is, in reality, not all that far off–because rather than raising up his head to look, he’s concentrated solely on the task at hand.

“Here’s your self-fulfilling prophecy in a nutshell. I’m guessing when you take something on, it’s either all or nothing,” I said. “The problem seems to be that you start things before you know what ‘all’ really is, so you wind up with ‘nothing.’”

The final thing I asked Lizzie to concentrate on was the energy she’d need to bring into her life to alter the pattern. She chose the Queen of Pentacles. A beautiful queen sits in a lush garden, surrounded by both what nature has provided, and what she herself has nurtured to fruition. “Do you see the contrast between this card and the first one?” I asked Lizzie. “To me, what this card is saying to you is that you have to find a balance between the masculine and the feminine, and that’s going to take some refocusing on a couple of different levels. The first is to understand that it takes discipline to grow a garden, but it also takes love, and letting things grow at their own pace. Rome wasn’t built in a day, right? You’re going to have to try breaking things down into smaller, more doable steps, and learn to see each accomplishment as progress.”

“And what’s the second thing?” she asked.

“The second thing,” I told her, “is that just because something takes a different direction than you’d originally planned, doesn’t necessarily mean it’s a failure. Don’t be so hard on yourself, okay?”

When Lizzie left she was smiling. It was a lot to take in, but I had hope that the messages she’d been sent that day made sense to her, and that she would learn to begin sending positive energy into the universe, even a little bit at a time, so that over time it would build, and when it returned to her, she’d enjoy a much happier and fulfilling future.

Can’t seem to succeed at anything you try? Why not let a KEEN advisor unlock doors to your past that might just be the keys to achieving a brighter future?

Keen Editorial Staff
Keen's Editorial Staff is made up of world-class writers, astrologers, psychics, and advisors with diverse experience and spiritual sensitivity.
The Fourfold Vision Tarot Spread: View Your Question Through Multiple Lenses and See What Comes Into Focus
Why Do Tarot Card Readings Give Different Answers to the Same Question?