Working With the “Scary” Tarot Cards: The Ten of Swords

Home /Tarot/Working With the “Scary” Tarot Cards: The Ten of Swords
Tarot |
Facebook0Tweet0Pin0 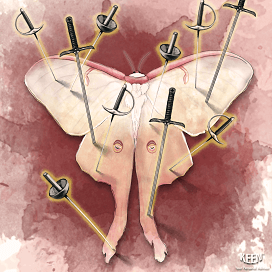 The image is grisly: a man, lying face down, with ten swords sticking out of his back. The landscape is desolate; a black dog growls at the body. The only light comes from a clearing sky.

The Ten of Swords is a scary card to look at! How can any interpretation, other than doom, betrayal, and death be suggested? When I was learning Tarot—by drawing a card every day and keeping a journal—the Ten would show up all the time. Anxiously, I waited to see what terrible things might befall me. This time was a tremendous lesson for me in how the Tarot actually works, and though it was nerve-wracking to deal with this card so often, I learned not to fear it and instead embrace its message—that sometimes letting go of the old is the best path to personal growth and new opportunities.

Okay—I’m not going to shine you on here. This card can mean that death will be showing up in your life. Not literal death probably, but the death of your ego, a way of thinking, or a whole batch of beliefs and mental concepts (the Swords relate to the mind). In my case, I was going through a challenging time of life, and I had started studying Tarot to help myself through it. Everything I thought I knew as “true” was being blown up. It was a tough time. But what I learned was that the Ten is the final push, the death throes, and beyond it lies a new beginning. That’s what the image of the clear horizon on the card is all about. The Ten is the end of the cycle, leading back to the Ace. This card was saying—your pain will end soon if you let go and allow a new set of beliefs to emerge.

Was this easy? Heck no! But everyone will have times in their life when they need to let the old fall away so that something new can be born. The more we resist this, the harder it will be. The Ten is asking us to let go, to let something die so we can rise again.

Another theme of this card is betrayal. It may mean that literal betrayal is afoot—but in my case and with most of my clients, it suggests self-betrayal, which can lead to a whole lot of outer turmoil. During the time I was drawing the Ten frequently, I was also in a strange living situation with an old friend. I was broke and working different jobs for other friends. Fear was guiding my life.

I was betraying my values and self-worth every day by choosing situations that I knew weren’t right for me.The old friend and I got stuck in a crazy power dynamic that led to her betraying me (kicking me out of the house), claiming that I had betrayed her. The two different friends I was working for took advantage of my willingness to give away my power and began expecting me to work for free or, in one case, have a relationship with her. I left both situations, and what do you know—both women felt betrayed by me!

It was an uncomfortable time, and I had the opportunity to look hard at my part in co-creating these situations and figuring out how to start again. When I understood how my self-betrayal had been mirrored in the actions of others, it was a light bulb moment. My life changed once I started honoring myself and taking back my power. The difficult people literally disappeared—and I stopped drawing the Ten.

An End is Near

The great thing about the Ten is that if you take the time to look at how and where it’s showing up in your life, you can turbocharge your personal growth by owning how your own mental patterns are taking you down. This card can mean that the end of a challenging situation is near, that the horizon will clear, and that the death of some ideas or aspects of your life will yield something new.

Now when I draw the Ten, I’m quick to check in with my mental constructs in whatever area the card is indicating. Is something over? Is it time to move on? Am I self-betraying, killing myself off with a critical voice or fear? The Ten helps us be aware—sometimes, though not always, through hardship—of just how we are limiting our own existence. Eighty percent of the time, it’s a warning to heed rather than a harbinger of doom. It’s the Universe saying—hey, take a look at your thoughts and what you are creating.

I would have loved to have a helpful Tarot guide support me through this time and help me understand the Ten. The best thing to do if you are facing challenges or drawing cards you don’t understand is to get a professional reading. Even if it’s just a short chat session, you can feel supported and get the clarity to help you move forward. The “scary” cards don’t have to be bad; sometimes, they are the biggest helpers in the deck.

Are you in a difficult life situation or confronting repeating themes you don’t understand? Advisors on Keen are here to help! Call today and get the support you need.

Facebook0Tweet0Pin0
What does “LOVE” mean to YOU? Let us know and you can win $1,000!
How to Read the Ace Cards in Tarot Spreads