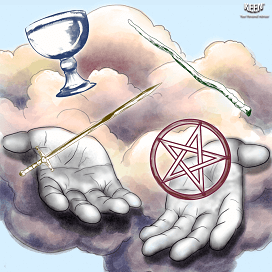 I’ve got to admit it, some of my favorite cards in the minor arcana are the Aces. I think it’s because they offer such potential, such pure creative opportunity. When they show up in a reading I just know that the querent (or me, if I’m reading for myself) is in for an exciting, inspiring time. Aces are the most “open” in some way of all the minor arcana because they literally can point to any type of manifestation within the suit they represent. After all, these cards are all about change, possibilities, and new doors opening.

Molly wanted a reading about a midlife career change. She had a few ideas but wasn’t sure which path to choose. We did a reading for each of the possibilities: going back to school to be a teacher, going overseas to teach English, or going to culinary school. The reading was a simple three card spread—one card for each option. For teaching English overseas, the card was the Ace of Wands.

“It will be an adventure,” I told her. “Obviously. But you’ll also find this is the beginning of a new creative and spiritual journey, as well as a radical career change. If you really want a fresh start, this is the option to pick.”

The Ace of Wands, like all the Aces, shows there is a possibility of expansion and unfolding talent. In Molly’s case, creativity, action, imagination, and spiritual expansion would all be possible if she chose to go overseas.

The Numerology of One

Aces hold the energy of the number one in each suit of ten. Ones hold the possibility for spiritual enlightenment, as well as being the active ‘do-ers’ of all the numbers. The one suggests that for the potential of the suit to be recognized, you must take action rather than sit back and hope something happens. Aces are not static; the opportunity comes but may also dissipate if unused.

Dave also called in for a three card reading. He was interested in looking at the energy of three different people he might form a new business partnership with. His first choice—who also happened to be a good friend of his—was represented by the Ace of Swords.

“This person will bring the most ideas to the table and the best strategies—the freshest feeling energy,” I explained. “If you need a visionary, he’s the one. You may have to draw him out or direct the energy, but he’ll bring a mental force.”

This quality was exactly what Dave needed, and he was grateful that the reading underscored his own intuitive feeling that his friend would be the best choice.

Colleen had questions about her dating life.

“I’ve never had so many choices,” she laughed. “It’s great. But I kinda want to settle with just one. They are all so interesting—but how to choose?”

Again, a simple card for each suitor made choosing easier. Bachelor number one came up as the Ace of Cups and number three as the Ace of Coins. These two men offered the most open and creative potential, but in very different ways.

“Do you want to move into a more settled state of being? Or expand your emotional range and connection? The Ace of Cups indicates the relationship will be emotional, heart opening, and give you a great opportunity to experience your feelings. The Ace of Coins might not offer as much romance, but it will be more stable and allow you to move into the potential for more tangible things like home, family, and building a life. What are you really looking for in a relationship?”

As Colleen found out, Aces often indicate an opportunity to experience the state of being indicated by the suit. Cups for emotions, intuition, and intimacy; Coins for prosperity, building tangible elements, grounding, and finding stability; Swords for intellectual rigor, mental stimulation, and truth; and Wands for enthusiasm, spiritual growth, creativity, and action. One isn’t better than the other, it’s just a question of what is needed or desired at the time.

Like all the cards in the Tarot, the meanings of the Aces are layered. If you want to cultivate new energy in your life in a specific area, a great tool for attracting what you want is to meditate on the appropriate Ace. Pull it out of your deck, study it, leave it on your altar. Ask for the infusion of the particular Ace’s energy into your life—and be ready to seize the opportunity when it comes!

Advisors on Keen are ready to help you use the Tarot to explore personal growth and manifestation. Explore your potential—call today!