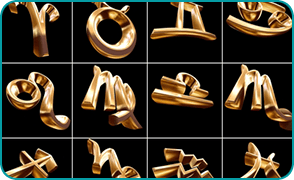 Have you ever wondered if your personality is like your favorite famous person? What makes them act the way they do? Compare yourself to these stars and see if you have what it takes to become tabloid fodder!

Aries
The Ram: You have a bold and sometimes risky attitude. Think of Reese Witherspoon, Robert Downey Jr., and Kate Hudson. They won’t back down from a challenge or confrontation. Russell Crowe has been known for a few public outbursts and that, in a nutshell, explains a significant part of the Aries experience.

Taurus
Taurus is symbolized by the Bull, an association that is quite appropriate. You can be very stubborn, and tend to dig your heels in when faced with confrontation. You are similar to Jack Nicolson, Barbra Streisand, Stevie Wonder, Billy Joel and Janet Jackson, who overcame adversity and have had successful careers.

Gemini
Gemini is symbolized by the Twins; you are daring and mischievous! Think of Johnny Depp, Helena Bonham Carter, Mike Myers, Donald Trump and Kanye West. This is the most playful sign of the Zodiac with the energy of two people.

Cancer
Cancer is symbolized by the Crab. You have a sensitive, emotional nature. When life gets tense, Cancer goes into self-protection mode, pulling into your shell until the trouble clears. Famous examples of your sign include Tom Cruise and George Michael.

Leo
Leo the Lion loves the limelight! Why else has Madonna been around longer than just about any other female performer? How about Jennifer Lopez on the page of nearly every tabloid for the past decade? Even Sandra Bullock had her fair share of the spotlight – for better or for worse. Leo personifies leadership, pride, warmth, courage and strength, just like the King of the Jungle.

Virgo
Virgo is symbolized by the Virgin, but don’t take that too literally. While you can be formal and fastidious, you also have a wild side. Just think of bad boy Charlie Sheen! However, many famous Virgos commit to their partners for the long run. Sean Connery has been married to his wife for nearly forty years. Other examples of long-term commitment include Faith Hill, Colin Firth and Jada Pinkett-Smith.

Libra
Libra is represented by the Scales, and represents marriage, beauty and harmony. You are diplomatic and sweet natured. Libras can’t stand confrontation and seek out happy, beautiful people. Many choose their partners for the long haul. Famous examples include Will Smith, Catherine Zeta-Jones, Sting, Gwen Stefani, Kelly Preston, Hugh Jackman and Matt Damon.

Scorpio
Scorpio is symbolized by the Scorpion, with a poisonous tail that can sting when its victims least expect it. This is a complex, passionate sign that sometimes acts in passion rather than thinking first. Perhaps Keith Urban, Leonardo DiCaprio, Whoopi Goldberg and Meg Ryan have made decisions based on emotion rather than logic?

Sagittarius
Sagittarius is symbolized by the Archer, the truth-seeker of the Zodiac. This is how a Sagittarius operates in life. Ozzy Osborne is the epitome of this sign, he’s an optimist and loves a good party! Think of Brad Pitt, Jay-Z, Taylor Swift and Miley Cyrus. They seem to have had some lucky breaks too!

Capricorn
Capricorn is symbolized by the Goat, always ascending to the heights of their aspirations. How about Kate Middleton? She waited patiently to snag her prince and became a queen. Capricorns are hard workers who usually have a healthy bank account. Actors Bradley Cooper and Jude Law have both worked very hard for their success, and have amassed vast sums of money.

Aquarius
Aquarius is symbolized by the Water Bearer, the humanitarian of the Zodiac. Think of talk show hosts Oprah Winfrey and Ellen DeGeneres who have helped many people. Other famous examples include Abraham Lincoln, Rosa Parks and Jackie Robinson.

Pisces
Pisces are symbolized by Fish, creatures whose scales gleam brightly in the sun as they follow the stream. Pisces are highly romantic. Drew Barrymore and Jennifer Love Hewitt have a reputation for sweetness but are oftentimes misguided. Other famous Pisces include Rihanna, Robin Thicke and Liza Minnelli, who have had their share of relationship woes.

Keen Editorial Staff
Keen's Editorial Staff is made up of world-class writers, astrologers, psychics, and advisors with diverse experience and spiritual sensitivity.
Choose the Right Astrologer
Fashion According to the Zodiac: An Astrological Guide to Style