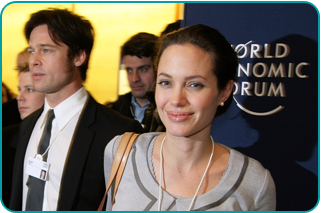 2010 and 2011 are significant astrological years for celebrities. The planet that rules celebrities is Uranus. When Uranus is in a zodiac sign, it stays there for seven years. In 2010, it changes signs, a rare occurrence, and then it retrogrades back to where it has been since 2003/04. In 2011 it moves out of this long visit to the zodiac sign of Pisces for good (or at least for 76 years) and moves into the zodiac sign of Aries. When the planet that rules celebrities makes a move, it means that every celebrity is vulnerable and especially under tension will be celebrity couples.

Some celebrity couples are strong and others have a hard time staying together. After having reviewed what brought them together, let’s look at which of 12 celebrity couples can handle the shifting planetary activity that puts a whiter shade of glare onto those who live in the spotlight.

While Brad gets more inspired to pursue his craft as an actor and his hobby as an architecture activist, Angelina is going to get a serious bump in her popularity – she will do something soon to show us all that she is not just a pretty face. We will find out how big the egos are as Brad gets kudos for his elegance just as Angelina transcends the “hot chick” stereotype in late 2011.

The rock and roll lifestyle will not be suited for an aging Chris Martin and he may take this alienation out by having a midlife crisis in public. Meanwhile, Gwyneth’s impatience for such acting out could influence her to pay closer attention off camera to the lead actor in her next film.

The first couple will be feeling the political pressure in different ways. Michelle Obama will be feeling cooped up in the White House, especially while Barack increases his foreign policy initiatives and travels more. His rebound in popularity will come from decisive action with a foreign government that will soothe his Capricorn wife. Capricorns love making history.

These two did not work out. Unlike the people who wagered on Reggie’s New Orleans Saints to win the Super Bowl, putting money on this pairing to succeed would have been betting the long shot. Kim got bored easily and has a wandering eye, Without the disruptive planet Uranus in his sign any longer, Reggie may actually meet new heights in athletic achievement in his season ahead, leaving memories of Kim in the dust. Consider Kim to be his last Uranian fling.

An around the world romance will climax as these two reach new levels of success and interpersonal affection. By mid-2011, when the planet Uranus is in Aries for an extended stay, Nicole will be bouncing back to the big time with award-worthy performances while Keith will have a new blast of inspiration and could be creating the most compelling music of his career. This is an exciting pair that combines creativity and passion.

These two may combine for box office power, but it looks like the planet Uranus could disrupt things that the two take for granted. Will is going to get pretty obsessed with a new mentor and Jada may have to use litigation to ensure she gets half of the community property. By 2012, this is one couple that could be in the history books because of the disruptive power of the celebrity-obsessed planet Uranus.

Nursing injuries late in his career, David may be turning to a new way of expressing himself. In this regard, he is following his wife, who had to reinvent herself after being known only as a Spice Girl. Of course, we all hope David will do a better job at reinvention than Victoria Beckham did, but these two are looking like a match for quite some time to come unless his new path involves a spiritual transformation. Here, Beckham would bend into a completely new person while Posh maintains her usual persona. Follow him to see what will happen to her.

These two did not work out. The touchy comedian Carrey is going to feel rootless and move about the world, shooting on location and exploring exotic haunts as the planet Uranus stimulates his curiosity and wanderlust. Look for Jenny to get a good gig in TV that keeps her stuck in a big city most of the year. Uranus is creating a desire to be nesting in her. What was the root cause of this relationship failing? The key was always Carrey’s schedule, which he ultimately controls; therefore, you know which one stopped caring as the trouble began to brew.

While Jay-Z is at a new creative peak and delivering some revolutionary rhymes in 2011, Beyoncé will be busier than ever with work in front of the camera on big productions. Can his imagination create things of impressive quality to keep her around? These two work as a team because that is all they know. This is a solid pairing and the planet Uranus will only be giving them more mutual electricity with which to enjoy each other!

Cradle-robber accusations no more, this couple has stood the test of time, but can they handle the shift of the planet Uranus? Demi is a creature of habit and the planet Uranus is about to shatter her daily routine in a manner that might break down her feelings of comfort and security. Look for Ashton to become obsessed with a particular subculture or offbeat group. This combination of disruption and seeking new experiences could imperil the stability of the pair. If Ashton starts looking kookier in public, it will be the first sign that a split is on the way. You can blame it on the stars.

The coming disruption for the planet Uranus to these two is going to be in their appearances. Look for Ferris Bueller’s Broderick to have a successful film wearing drag or made up as a horrific monster. The big box office will identify him as his character for years to come. Meanwhile, as Sarah Jessica ages, she is going to be seeking out more serious roles and could also become inextricably associated with one. These two will be too busy working to have anything to fight about or split up over.

Look for an intense testament of faith to deliver Tim McGraw a new wave of superstardom. The planet Uranus is activating his spiritual quest, and by 2011 he will be deep into a new phase of creativity combined with a conversion to some belief system. Faith meanwhile will find investors for big projects that may be out of the limelight but will be immensely profitable. These two have their daily rhythms down; they will be fine together.

Keen Editorial Staff
Keen's Editorial Staff is made up of world-class writers, astrologers, psychics, and advisors with diverse experience and spiritual sensitivity.
Sun in Gemini: Talking About Love
Jupiter Opposes Saturn: The Decade Past