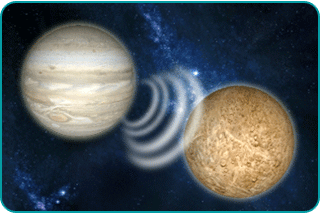 The planetary energy in the middle of summer could be creating some big challenges for you down here on earth. The Sun and the Moon and some nearby planets (Mercury, Venus and Mars) circle the zodiac at regular intervals and move at a steady, quick pace. When they interact with tension the whole ordeal does not last long; since these zodiac wanderers move in monthly and semi-annual cycles, their tense alignments with other planets in the zodiac begin to recur so often over our lifetime that we learn how to deal with these regularly occurring challenges.

Jupiter and Pluto, on the other hand, are planets that are further out from us in the heavens and thus do not interact in regular rhythms. When they get tense together in the skies, the challenges down here on earth can be daunting for all of us.

Jupiter is the planet that rules expansion. All big endeavors and grandiose visions on earth have Jupiter above goading them on. Expanding the reach of a business, making a bold move in love, getting rich quick, gaining weight, taking a big bite of all that life has to offer – all of these activities here are ruled by the biggest planet up there.

Pluto is so small and so far from Earth that some astronomers unaware of its astrological potency recently conspired to vote against its status as a planet. This little planet moves so slow that it takes over 200 years to circle the sun. When Pluto is in one place in the zodiac it stays there for a long time. This planet rules transformations – the wrenching pain of change that we cannot accept as well as the exhilarating rush of becoming that which we envision. It is also the planet that oversees our secrets.

Jupiter and Pluto are close to forming the same tense angle that they did most recently in March of 1998 and August of 2004. When the planet of expansion gets tense with the planet of secrets, look out for big revelations, intense feelings that are difficult to articulate and a hunger for answers about interconnected facts that seem to go together even though they never add up.

Jupiter and Pluto will square up throughout July and August of 2010 and again in February and early March of 2011. Read your sign below to see where the tense big transformation is coming from and how it will affect you.

Your desires on the career front take a dive when you realize that your high aim may be for a position that is actually given to people who are related to a boss or bosses – the secret is out: nepotism wins in your field.

A burst of creativity may take you deeper into interactions with a crowd that shares few things in common with your background. Being the outsider is one thing, but not knowing how to conduct yourself could get you into trouble.

Your finances and basic fiscal security may abandon you when you need the cash most. Downsizing is a must, but can be approached with your great curiosity. The big change you can make will be to leverage your experience and move up to something better. Is an old loan coming due?

A secret may be looming for confession between you and a lover. Why spoil the fun when you can just move on? Prepare for the worst, but plan for the best; you needn’t ruin a good thing. If he brings up his past, let it slide if it does not involve you.

The excitement that comes with summer travel will be matched with the doldrums of having to complete your work in a timely manner to a suddenly demanding and picky boss. Assert your rights, but don’t push where you might get shoved.

This is the summer where the magic of the moment could lead to many unplanned expenses and new arrivals. Try to balance your passion for living in the here and now with a sense of planning for a stable future. You could easily protect yourself and avoid the deepest transformations that are possible.

Your residence will challenge a partner to either go all the way in a relationship, or turn and run. Cleaning up and presenting your best will work in the short term, but a long-range commitment will require you to actually undergo a change in who you are.

You will experience the thrill of being told to do things under an old method when the world has changed. When you feel like you have had enough of doing something in an hour that should take five minutes, you will risk speaking up, but by then the secret will be out.

Hiding your love or lust from someone is advised until you get to know this person a little better. When they say not to judge a book by its cover, it applies to the possible loves in our life who appear to be perfect. The secret behind some appearances might break your heart this summer.

Moving on in life will be pulling you up by your roots and a drift away from some groups of friends or family will be inevitable in this process. Instead of fighting change, spend time glorifying your recent days in art and writing in order to better know who you are and where you are going.

Your investment in communicating clearly will be challenged by unexplained visions of the future. You thought you knew it all but now you can see the way things are going to be in a relationship down the road. Does a dead end one-way street appear attractive when you still have options to live life on your terms?

Access to an exclusive place and spending money might make you popular, but the short-term investment of what you have in a long-term project would be the wise way to change who you are, instead of thrill-seeking with fake friends on into the night.