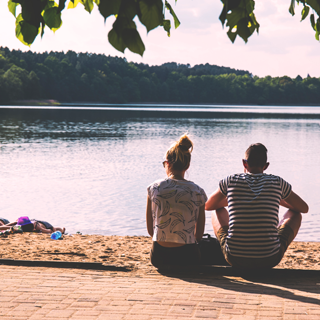 If opposites attract, what happens when two water signs try to make it work? Cancer (June 21-July 22) and Pisces (February 18-March 20) are two fluid, sensitive signs associated with the water element, but they’re actually completely different creatures. Like the crab that symbolizes her sign, the Cancer woman will come out of her shell and fight for you if you’re lucky, but she prefers to stay in a safe space. The Pisces man, meanwhile, is just as ambivalent and flexible as the two fish that symbolize him. Forever swimming in two opposite directions, he often feels torn between different identities and loyalties, and he’ll go out of his way to adapt to new situations. So, what happens when they get together?

Compatibility between Cancer woman and Pisces man relies on being able to understand each other, which personality traits are the most dominant, and which are lurking beneath the surface ready to bring out the best or the worst in both of them.

Meet the Cancer Woman: Compassionate to Her Core

Cancers are nurturers and natural caregivers, and their emotions are both their greatest strength and their greatest vulnerability. Because her traits already tend toward the feminine, the Cancer woman is especially in tune with her feminine side, making her a stable counterpart for partners with a lot of masculine energy.  Whether she’s a friend, colleague, or romantic partner, the Cancer woman cares very much about your feelings and opinions, so it’s important to show that you value hers too. If you’re exhausted by unpredictable, easily excitable people, Cancer is a good match, because she stays steady and consistent unless she’s threatened.

When a Cancer woman is content with something – whether it’s a holiday ritual, a lover, or the layout of her living room – she doesn’t see a need to change it. Of course, that doesn’t mean she never changes. The Cancer woman prefers a small group of close friends, but she loves to travel and meet new people. She’s quiet and calm but, while you’re talking, she’s using her experiences and emotional instincts to better understand you.

Meet the Pisces Man: Spontaneous to a Fault

The Pisces man is quicker to commit and quicker to break your trust than a Cancer. He loves excitement and surprise, and he’s always experimenting with his identity, which leads to whirlwind romances as well as intense friendships that don’t necessarily last forever. Unfortunately, the Pisces man has the potential for dishonesty as he tries to fit in, and for infidelity as he searches for satisfaction and closeness. But if his needs are met and he feels safe and protected, he’s more likely to be honest with his loved ones.

Although the Pisces man sounds like someone who loves to party and socialize, he’d probably describe himself as a homebody, because he needs alone time to recharge and express himself. He might have creative hobbies that allow him to nurture his feminine side, or unhealthy habits that distract him from negative emotions, but he’s trying to understand himself just as much as you are. Fortunately, when he’s paired with a friend or partner who’s deeply in touch with their emotions, it brings out the best in him.

So, what happens when the crab and the fish decide to mingle? Both Cancer and Pisces have caring, sensitive instincts that make them excellent listeners and empathetic partners. However, the Cancer woman prefers stability, honesty, and emotional closeness, while the Pisces man tries to show love in superficial, physical ways and doesn’t always tell the whole truth. Here are some revealing tips for avoiding conflict and satisfying each other’s needs in a Pisces-Cancer relationship. Get a love psychic reading on Keen for more insights about your Cancer-Pisces romantic match.

The key to chemistry with a Cancer is trust. The Cancer woman needs stability and loyalty from her mate, and she deserves it. After all, she knows how to be loyal and will make sacrifices to keep her partner happy, in part because her strong sense of empathy prevents her from neglecting his needs or betraying him. When she hurts him, she hurts herself too, and that’s great news for anyone who has trouble trusting their partners. However, if her partner is a very sexual Pisces, he might notice that this intimate connection doesn’t carry over into the bedroom.

Cancer women aren’t known for their sexual expressiveness, but they can actually be very passionate, open-minded partners. They just enjoy physical intimacy more when it’s tender and rooted in deep emotional intimacy, and they need to feel respected and trusted before they start developing this part of themselves. Emotional synchronicity comes easily to a Cancer partner, but a true physical connection is rarer, so she will hold onto it when she finds it.

The Pisces man isn’t hard to love, but understanding how he loves is a different story. Because he’s constantly looking for validation and excitement from others, he tends to jump head-first into situations that may not make him happy forever. He also tends to confuse love with sex, so he may assume his partner understands how much he cares without words. While Cancer women are emotionally intuitive, this doesn’t always apply to physical expression, so it’s important to ask the Pisces man to clarify his feelings if you’re not sure.

In order to build a strong foundation of trust with a Pisces man, you should turn his short-term passions into a long-term bond. Give him space to be spontaneous, whether that means letting him pick the restaurant or accompanying him on risky trips. If he feels accepted and has a partner in crime, he won’t feel the need to change or hide his real desires, making it possible to get to know the real him. Pressuring him or trying to control him is a good way to get a fake version of him.

Do you have more questions about your relationship with a Pisces man or a Cancer woman? Contact one of our online spiritual advisors for help interpreting your star charts and romantic compatibility.