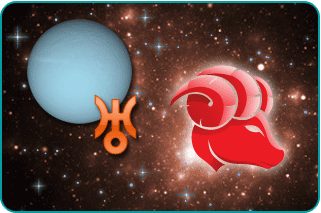 Shocking news and sudden surprises are often triggered by the influence of the planet Uranus. Unlike the other planets that rotate on a polar axis, Uranus appears to be spinning like a ball rolling toward us. Its axis is just a few thousand miles above its own equator. This creates the disruptive energy of the solar system that turns things sideways. When this planet gets involved, look out for the unexpected.

Understand, though, that a chaotic turn of events is often a great thing. Winning the lottery is a shocking development! Love at first sight changes everything in your world, but upsets like these are not considered to be negative.

Change is only a problem when you resist the inevitable. Shocks arise when you have been ignoring the messages that the universe has been sending you about moving on and evolving.

The planet Uranus is far away from us all. It takes 84 years to go around the Sun. What it lacks in proximity, it makes up for in size. The energy from this big guy can change your whole world in a day. Because of this long journey through the zodiac, when Uranus moves into a sign, it stays there for quite a while.

Read below to see what you can expect from the unexpected as the planet Uranus shakes things up over the next few years. Better to be prepared now than surprised later