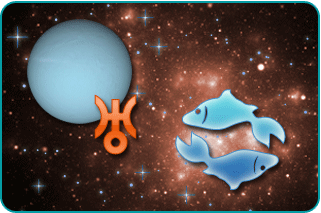 The planet Uranus is about to make a big move in the zodiac. This planet is so far out that when it visits a zodiac sign it stays in that sign a long, long time. It has been in the zodiac sign of Pisces since 2003 and remains there now, but it will be visiting Aries in mid 2010 and moves there permanently in 2011.

This distant planet spends almost half of each year in retrograde and when it moves forward soon, it will be onward toward a new sign of the zodiac. This signals a last chance at certain opportunities. Look back on the past 5 – 7 years. There has been something there for the taking that may have eluded you. The planet Uranus rules sudden surprises, shocking events and has a close relationship to electricity. The planet was discovered as science was just learning to harness electricity. This planet can inspire a bright idea in a flash and surprise you with unexpected circumstances and information.

And so you are now presented with one last chance to embrace the opportunities of the past few years. Look back to 2003 and 2004 and the things in your life that were just beginning. There was much potential established and perhaps you benefited from the way things went. But if you could go back to 2006 or 2005, is there anything that you would do differently? Well there is still a little time, especially if the things you should’ve, would’ve or could’ve done differently match up with certain astrological opportunities. The planet Uranus first presented these chances to those born under your zodiac sign when it began its visit to Pisces in 2003.

Each sign of the zodiac is affected differently by the presence of a particular planet in a specific location. When the planet Uranus is involved, there are lightning fast surprises that can benefit you if you take advantage of the opportunities they present and shocking twists that can set you back if you give up too easily. Uranus ends it retrograde in Pisces on December 1, 2009. You will have until May 27, 2010 to once and for all seize the opportunities that have been awaiting you for the past six or seven years. When this electric planet first visits Aries on May 27, 2010, your zodiac sign’s relationship to Pisces will be complete as it relates to benefitting from the presence of the planet Uranus. Read below to see what opportunity awaits you between now and the end of May.

Last Chance at…: Your opportunity to gain a spiritual enlightenment is coming to a close soon. The best way to find your inner light may be to add socializing to your studies if you are pursuing the first investigations of a new belief system.

Luckiest During: The week around your birthday.

Last Chance at…: Your appearances in public have put you on the brink of stardom in your field, and yet your Taurus stubbornness has held you back as you have resisted compromising your principles. This is a chance at fame.

Luckiest During: The latter half of February.

Last Chance at…: A dream career opportunity was offered to you and you may not even realize it. A few Gemini individuals took the chance and are enjoying life, but if you long for that dream position, the chance at quick advancement is still open.

Last Chance at…: Get your fill of an educational opportunity. Did you assume you would always have a chance to study with a person you admire? Now you learn circumstances are changing. Can you alter your schedule to finally do it?

Luckiest During: First half of March

Last Chance at…: Find out just what your legal rights are. If there is any question that you are owed money or due part of an inheritance, this is the time to act. A window of opportunity to get what is rightfully yours could close before summer.

Luckiest During: First half of January

Last Chance at…: Your intense crush on an eccentric individual has eaten away at your heart but there is a great chance to finally land the one catch you could never quite critique. You are about to get a little too close to comfort with deep desire.

Luckiest During: Last week of February

Last Chance at…: Get the details of a new way of doing business or studying. You have had the pieces to the puzzle, but a few months of putting them together will deliver the same prize as if you had made this effort a few years ago.

Last Chance at…: You might have dabbled in a creative field and shown some talent and then gone off and worked in a bank if only to pay the bills; always thinking that you will go back and be a great painter or singer or actress. It is time.

Last Chance at…: If you have known that the big move was the right thing to do, did you do it? There is still time to relocate to the place that you know would be beneficial for your living situation. Can you go where you want?

Luckiest During: After Mid-January

Last Chance at…: You might have thought that blogging was for you but have put it off. Perhaps the idea of podcasting was attractive, but you did not follow through. You have a chance to establish your voice with new technologies. Immerse yourself, have fun and speak your mind.

Luckiest During: April and early May

Last Chance at…: While your financial investments may have had their ups and downs, there has been one revenue stream that you just know will work and yet, for some reason, you refuse to tap into it. This is your last chance at that tap.

Last Chance at…: You have had a mental image of a makeover that you know would make you look great. You have embraced the idea of it for some time. It is a look that is ahead of its time. But now is the time to take the time to get it done on time.

Luckiest During: The holidays and first week of the new year

Keen Editorial Staff
Keen's Editorial Staff is made up of world-class writers, astrologers, psychics, and advisors with diverse experience and spiritual sensitivity.
Sun moves into Sagittarius – November 22nd
Will Your Love Last?