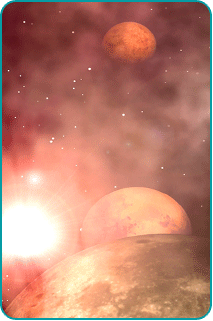 When your astrologer gives you a warning of a challenge ahead, this is based on the actual location of the planets today in the solar system. Your astrological analysis consists in a simple examination of where the planets were on the day you were born and a comparison of where they are now.

Your astrology chart is a map of planetary locations. The zodiac is a 360° circle that accounts for the daily circular spin of the earth. When planets align well and create harmony, good things are forecast. When there is tension between planets, challenges arise. The beauty of these challenges, though, is that rising to the occasion and persevering makes you stronger, to the point that future planetary tension underscores your past gains, rather than delivering new blows.

There are two types of planetary interactions that astrologers generally agree upon as creating tension in the world: oppositions and squares. The opposition is when one heavenly body is on the opposite side of the zodiac from another planet. Each month, the Moon opposes the Sun – this is what makes the full moon. An opposition can also take place between a planet moving in the sky today and the location of another heavenly body recorded on your birth chart. When it is six months after your birthday, the Sun is halfway around the zodiac. While there can never be two Suns opposing each other in real time, the Sun is opposing its location at the time of your birth. This can also be true of any other two planetary combinations.

A square is the other tense aspect between two planets in astrology. It occurs when two planets are ninety degrees apart on the 360° circle of the zodiac, the circle that circumnavigates our world. A square is halfway to an opposition. Of the two hard angles in astrology, the square is more commonly agreed to present you with a bigger challenge.

When a square or opposition occurs in real time or in relationship to your birth chart, the effects are not necessarily negative. Obstacles and challenging situations are common, but bad news is also a possibility. Setbacks, chaos, destruction and anxiety manifest under various planetary squares and oppositions. One thing that you can always control under these circumstances is your response. Just because a situation is foisted on you from circumstances beyond your control does not mean that you have to surrender. You can go with the energy of tension and challenges brought by planetary squares and oppositions. Accepting change, avoiding confrontations, allowing plans to be altered … all of these are strategies that absorb the negative energy of the zodiac’s hard aspects.

Each heavenly body carries its own unique challenges when it forms a square or opposition to another planet or a point of interest in your personal astrology chart. Read below to track the effects of each big player in the solar system.

Hard angles from the Moon bring up deadlines, peaks of creativity and other climaxes in our personal and professional lives. The square and opposition of the Moon to Saturn is said to predict peak job performances and if your boss studies astrology, this is one cycle of which you need to be aware.

Solar oppositions are challenges to your ego from other people. Squares by the Sun represent when you have two paths in a situation that seem to be of equal weight. Big decisions can be a burden.

Mercury is a planet that creates lots of confusion and communication breakdowns when it forms a square or opposition in the zodiac. When you make an agreement with a tense planetary angle involving Mercury, look for the details of that handshake to come back and present challenges in the future.

Being the planet of love, you can bet that a tense angle in the heavens from Venus means that relationship issues are on the front burner. The inevitable softness of this special planet actually makes the hard angles good for a few things involving your love life. A hard angle from Venus is likely to motivate a non-committal boyfriend to agree to a monogamous, public relationship. This is one time the heavens help give love a nudge.

When Mars makes a hard angle, we all find out why it was known to the ancients as the planet of war. This is the time that confrontations erupt, short tempers flare and harsh words fly. Breathe deeply; Mars does not hold a hard angle for more than a day or two.

The planet of excess, Jupiter, delivers a double dose of overdrive when it forms a hard angle. Jupiter is a slow moving planet, so when it makes an opposition or square to another point in the zodiac, this can last for a few weeks. Jupiter tension manifests as the old saying, “when it rains, it pours.” There will be so much going on in your life, that you will miss most of it and likely end up making up for lost time while cleaning up lots of messes.

When life delivers limitations to you that seem overly severe, look for Saturn to be making a square or opposition in the zodiac. When Saturn moves into position, the tension can last for months on end. This is the final visible planet of the solar system and its effects define our individual evolutions. A Saturn opposition or square will be a time in your life marked by final change. It need not be sad, but it is always major. A wedding can be a joyous time, but it signals monumental, permanent changes. Ditto having children – you can mark the date of the Saturn square ahead of time or behind, but you will come to find that it changed everything.

The three outer planets Uranus, Neptune and Pluto, are so far out that a square or opposition from them can last years. The force of these, however, is usually weak enough that we all adapt to the situations that are presented. They also tend to deal with issues affecting large institutions and social attitudes as much or more than they affect us individually in a drastic manner. Uranian tension manifests as sudden shifts. When newspapers suddenly had to compete with the Internet, it was one example of Uranus forcing needed change that many could have seen coming for years. Neptune rules drugs and alcohol and society’s attitudes toward them. Artistic approaches are also molded when Neptune forms squares and oppositions in the zodiac. Pluto is the planet of complete transformation. When it creates a hard angle in the zodiac, it is the end of an era.