Mercury’s Influence on Summer Love Compatibility in the Astrological Chart 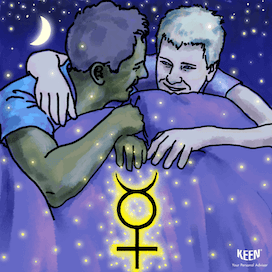 Whether it’s the passionate heat of summer igniting new relationships or the 90 degree days causing tempers to flare, love problems explode in the summertime. Perhaps it’s also that so many couples travel in the summer, and nothing exposes the need to communicate more than traveling with another person. Whatever the reason, I always hear from clients who want help navigating the fun, but treacherous waters of summer love.

One of the first things I consider when looking at romantic compatibility in the astrological chart is Mercury. Yep, this planet of communication and learning often gets ignored in chart comparison, but is crucial to successful relationships. If couples are having problems, at least half the time it’s a communication issue. Understanding your own and your partner’s Mercurial influence can help make way for compromise and better listening—so you can really hear what each other is saying.

The Role of Mercury

In mythology, Mercury was the winged-foot messenger to the gods. He was the patron of businessmen, poets, tricksters, travelers, and thieves. In our astrological charts, Mercury represents how we communicate. The sign indicates the qualities we apply to our communication, but also how we filter information coming in from the outside. He can also indicate the flavor of our sense of humor or how we’re likely to take a joke.

Mercury also influences our learning style, which is crucial in navigating any relationship, but especially new ones. The sign he’s placed in can show our processing speed—do we need a few days to process responses or are we ready right away to enter a dialogue?

The house placement of Mercury shows the area of life that we are the most comfortable talking about, or where we may have the greatest facility for learning. For example, a third house Mercury will be a natural communicator—at home in his own house. He’ll likely be a decent writer and an expressive speaker. He may also be a natural teacher. Contrast with a twelfth house placement and you’re more likely to see an introverted style, comfortable with the deep issues of spirituality, life, and death, but not much of a small talker.

Mary Beth came for her first visit with me to discuss a tough time she was having with her boyfriend, Brett. The two had met at a Memorial Day BBQ, so the connection was recent. They had moved forward swiftly, however, and were discussing living together when a weekend trip blew up all their plans.

The two had gone camping for a long weekend in Brett’s little trailer. Mary Beth wasn’t very comfortable with this, as the trailer was “vintage” at best, and Brett just assumed she wouldn’t mind answering the call of nature outside and functioning with no running water.

Mary Beth was no princess, but she admitted she didn’t like roughing it much. Not wanting to complain, she didn’t say anything about her discomfort. She was terrified to go out at night and spent wakeful hours praying her bladder would hold. Tired and cranky, she was irritable with Brett, who had no idea what was going on. He didn’t ask, though, just planned the day’s activities and took charge. Mary Beth, determined to be a good sport, went along.

By the end of the weekend, Mary Beth was exhausted and upset with Brett’s lack of consideration for her. When the two finally tried to talk on the way home, he would ask her about her feelings, only to shut her down minutes into the conversation. He felt like she had misled him about her desire to take the trip and told her she was being passive aggressive. They were on the verge of breaking up.

“Sounds like you guys were totally missing each other communication-wise,” I said. “Let’s look at the compatibility in your astrological charts.”

Brett had given her his birth info, so I looked up both their Mercury placements first. The tricky dynamic was clear from the start: Brett has Mercury in Aries, square against Mary Beth’s placement in Cancer. Brett’s Mercury was in his seventh house, but Mary Beth’s was in her tenth.

Mary Beth’s Mercury sign of Cancer put an emotional overlay on communication. Cancer is a shy, sensitive sign and can indeed be passive-aggressive. Symbolized by the hard shell and claws, Cancer needs to protect itself and can get snippy when hurt. Like the sideways motion of the crab, Cancer also doesn’t really like communicating head on—that Mercury placement expects others to intuitively know their needs. Since they are often intuitive, they don’t understand when others don’t know what they need or feel.

In addition, Mary Beth’s learning style was slower and she needed to feel safe first in order to expand herself. Because she didn’t feel comfortable or safe on the trip and she felt misunderstood, it was a recipe for disaster.

Brett, with his Aries Mercury, was an act first, talk later (if at all) type of communicator. This placement can often yield the “typical man” dynamic: one where he takes charge, doesn’t ask what others need or want, and feels that the best way to work through problems is to blast through them. He is able to shrug his own feelings off pretty easily, favoring to-the-point conversations.

Typically Aries Mercury doesn’t have a large “container” for holding others’ feelings, which is why he shut her down so quickly when they finally talked. His seventh house placement made him willing and interested in talking about the relationship, but he needed shorter, more resolution-oriented conversations.

Brett’s way of learning was by doing. Taking action, going for it, and assuming all will be well were hallmarks of his quick, fiery Aries Mercury.

Were they doomed? Of course not! But it was going to take some effort to address their Mercury issues.

How to Work With Your Mercury in Relationship

When a couple has Mercury in a square or in opposition in the astrological chart, they can still be compatible and have a successful partnership. Knowing each other’s Mercury placement helps pinpoint what issues need to come to the table and how to address them.

Mary Beth and Brett made the mistake of not talking about the trip before it began. Knowing that Mary Beth needs emotional support, a feeling of safety in order to expand, and time to develop a conversation, Brett can now work on his own ability to meet those needs.

In turn, Mary Beth knows that Brett isn’t going to guess how she’s feeling, and that unless she speaks up, she may get swept up in the tide of his enthusiasm and agenda. She gets to work on standing up for herself and finding her voice.

Knowing your own Mercury strengths and weaknesses, and those of all your relationships, can help decode the unconscious types of interaction you have with others. Any relationship’s success will be based on how well you are able to communicate with one another, so lay the groundwork for positive connections by getting to know how Mercury is influencing you and the ones you love.

Is the heat of summer firing up your relationship communication? Call a Keen advisor to find out more about love compatibility and Mercury in your astrological chart.

Keen Editorial Staff
Keen's Editorial Staff is made up of world-class writers, astrologers, psychics, and advisors with diverse experience and spiritual sensitivity.
Diosa Readings: Understand Your Relationships and Karmic Connections
Letting Spirit Speak: Finding Answers to Yes or No Questions with A Pendulum