Are Ghosts Real, and How Do I Make Them Go Away?

Home /Psychic/Are Ghosts Real, and How Do I Make Them Go Away?
Psychic |
Facebook0Tweet0Pin0 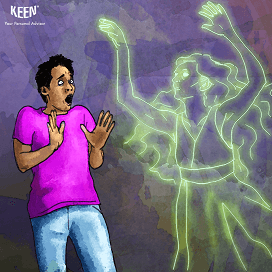 Halloween is approaching, and we’re seeing the typical white ghost image hanging from neighbors’ porches and decorating everything from soap dispensers to screen savers. I’m honestly not sure where the sheet-draped image of a ghost came from, but I’ve never seen a ghost that looked like Casper.

Clients often ask me if ghosts are real, and, if they are, what are they? I have first-hand experience with ghosts, as do many of my clients. Ghosts come in a few flavors and can create anything from annoyance to terror. But let’s be clear on one thing from the start: ghosts of any kind cannot actually hurt you! So while it is often frightening to see or be around ghostly beings, they can’t possess you (without your permission) or do any other scary thing that horror movies or ghost stories might suggest.

There are three main types of ghosts. They represent a progression of stuck energy, and, ironically, the more stuck they are, the more powerful they get. Let’s take a look.

• Earthbound Spirits: These are souls who have transitioned but for some reason haven’t moved on. Either they are confused about actually being dead, which happens when people die suddenly or in strange circumstances (freak accidents, murder, etc.), or they are still very attached to the living, specifically one person whose energy they drain. They are usually felt rather than seen. These are the spirits you can actually contact through a reading.

• Ghosts: Once an earthbound spirit has been stuck for awhile, they become better at getting energy to sustain themselves and can actually learn to appear and move small amounts of energy. Often they will “outlive” the person they were attached to and so remain in a physical location. This explains hauntings associated with houses or public places. They are alive in the strange sense that their spirit is living in an astral realm. They will attach to anyone who has a similar enough vibration to them—i.e. anger or fear—but stay in the physical location once you leave. If you know you are going to a place with disturbed energy, you can take measures to protect yourself to help keep this from happening. Occasionally, there will be ghosts in sites of massacres or battlefields—any place where many people died in violent ways. These ghosts may re-enact the way they died, sort of like a hologram of history playing on a loop.

• Poltergeists: There is quite a schism about what a poltergeist actually is. Some people say this phenomenon is created by the energy of a specific person, such as a teenager with lots of unexpressed angst, a mentally-ill person, or anyone who has suppressed emotions or limited abilities to express themselves. I have found this type of disturbance to be rare, but it does happen. More common is the ghost who has become very adept at getting energy from its environment and moving energy around. This spirit will have been stuck a long time and will perhaps even have forgotten its divine origin or that it can move on to a different reality. Poltergeists of this nature will delight in creating mischief such as moving objects, hiding things, or making messes. All of this creates attention and energy for the ghost.

How Do I Make A Ghost Go Away?

Clients who come with ghosts in their lives usually want to make them go away! The universal first step is to “pray them out.” This doesn’t have to be a religious ritual, but it does require intentionality on your part. If you know who they are, then ask for an angel or their guides to escort them to their next level of experience. If you know what is unresolved between you, then try to address that issue. If you don’t know who your ghost is, you can still ask for an escort of divine beings to help them move on.

My client Sissy had moved into a new apartment in a recently renovated historic hotel. She and a few other tenants had been seeing the same ghost in the basement laundry room and were getting unnerved.

“She just looks so sad,” Sissy said. “I feel bad for her, stuck there in the basement!”

I had a look at the building during the psychic reading. I found that a few women had been killed there in a fire, and they had all worked in the hotel’s laundry facility. She was literally appearing where she felt most “at home.” The event had happened well over 100 years before, and so she was a full-fledged ghost. I gave Sissy a simple ritual to perform, which she did with two other tenants. Soon after, the woman was gone.

Another client, Jim, lived in an apartment that had been a boarding house before it was renovated into luxury flats. This ghost had progressed to the poltergeist stage and was fond of pouring dry goods like flour and sugar onto the countertops. It also liked to thump the walls and hide his wife’s earrings. When I looked at the energy, I found that the spirit had been inhabiting the location since the building before the boarding house, which meant that it had been stuck for over 400 years! I did an actual property clearing for Jim because this spirit was very well entrenched.

The important things to remember about ghosts is that they can’t hurt you, and they need help moving on so they can reincarnate and continue their soul’s journey. Some spirits you can clear yourself, and others you may need a psychic or other skilled person to clear for you. If you have a ghost, even one who seems friendly, they need your help!

Do you feel you have a ghost or spirit of a deceased loved one around? Are you moving and want to make sure your new home is free of disruptive spirits? Contact an advisor on Keen and that clear ghostly energy.

Facebook0Tweet0Pin0
Which is Better: Distance or In-Person Psychic Readings?
What is a Love Spell, and How Do They Work?

How to Know When to…

Dreams About Spiders and What…