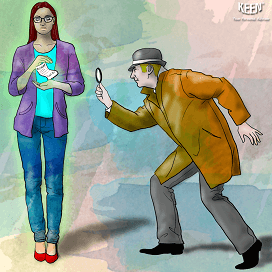 “You’ll never guess who I had coffee with the other day,” my colleague, Lina, told me, a smile on her face.

I thought a moment. My hint was: “A man in a suit…not a client, exactly…”

Lina pounced. “A detective! From the police! They haven’t gotten anywhere on this latest missing person, and since his wife sees me personally, he thought he’d just ask.”

She told me she felt strange reading for this missing boy but was happy to help if she could. She told the detective she’d read for it and call him back.

“I did see a building, pretty specific, and I didn’t get a good feeling about it,” she said. “I just told him what I saw, and then he’ll use it or not.”

Though I have never worked with police—and neither had Lina before this case—there are psychics who specialize in this kind of work. Sometimes they help, sometimes they don’t. But there are a few celebrated cases throughout history that have been solved as a result of information obtained from psychics.

Paula disappeared after a night out with her friends. Her fiancé hired the psychic Phillippe Durant, who used items such as a map and a piece of Paula’s hair to narrow down a location. Her body was eventually found only a mile or so away from the place where Durant instructed police to look.

Arthur was killed in a small plane crash with three others, but the plane and victims weren’t found. After the search was called off, Herbert’s sister hired a psychic detective, Noreen Renier, who gave the exact coordinates of the crash site. Police acknowledged that Renier’s assistance played a vital role.

Maria was a prostitute whose body was discovered seven months after she disappeared in the Australian bush. She had been stabbed. Police had a suspect, but he killed himself before he could be questioned. Four years later, psychic Debra Malone was called in by police and led them to the place where Maria had been killed. They found the weapon, and Malone also said she felt the killer’s ghost—before police confirmed that the killer was dead.

Penny was killed in 1974. Police ultimately consulted a psychic, Pascarella Downey, when they hit a dead end. She predicted that the killer’s name started with “E,” that he was a mechanic, and that he wouldn’t be apprehended right away—but that “blood would be his undoing.” Twenty six years later, a man named Edward was arrested for Serra’s murder and linked to the crime through DNA testing. He had indeed been a mechanic at the time of the murder.

When a girl disappeared in New York, Allison was able to describe a place specifically to the girl’s father and added that she was in a swampy area. The father began searching and eventually found his daughter in a place Alison had described—in an oil drum in a swamp. The psychic also correctly predicted how she died and by whose hands, and the girl’s boyfriend was later arrested for the crime.

More success stories are publicized over the years, but it’s impossible to know how many cases are helped by psychics because often a detective may consult a psychic off the record, much as Lina’s did. If they use the information and it’s helpful, the psychic may or may not get credit. Often, it is family members who enlist the psychic, and police can choose whether they want to follow the information.

Of course, many psychics aren’t interested in solving crimes. After all, the work of law enforcement is a great service but also carries a tremendous amount of responsibility. Psychic prediction isn’t an exact science, although people—especially those involved with the pain of a missing or deceased loved one—may want it to be.

There have been famous cases of psychics being wrong, too, and this has led to criticism of using psychics in crime investigations. And because psychic information is often vague, symbolic, or incomplete, it can be hard to use. Does this mean psychics who feel called to help police shouldn’t be involved? Absolutely not! Accessing the skills of a reputable psychic can yield life-saving information or, at the very least, help put families’ minds at rest. In an investigation, it’s impossible to know what small clue will lead to solving the case.

While hopefully you aren’t searching for a missing loved one, you may have small mysteries in your life that you’d like insight into—like what happened to a missing pet, why a friendship died, or why a relationship didn’t work. Advisors on Keen can help you answer these questions—why not call today?