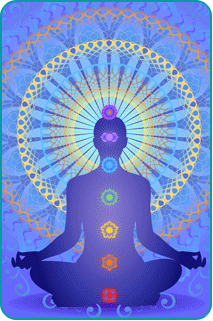 The ancient art of aligning the body with energy centers is known by the name chakra. There are seven chakras in your energy field that simultaneously reflect and rule your physical and emotional states. They begin at base level and elevate to the space above your head where your spirit resides.

Less is known about how chakras correspond to astrology, but in knowing your zodiac sign, you have more information to help you understand which chakra is serving as your main source of power.

This information will let you know which of the seven chakras is your power center. Read below and focus on empowering your psyche, mind and body through one of these physical gateways.

Third Chakra: Your Solar Plexus Chakra
Aries and the third chakra are each ruled by the planet Mars. The solar plexus chakra is located above your navel and is instrumental in guiding you on gut hunches and other matters of intuition. Your impulses tend to be right in the pursuit of power for this very reason. When you feel it in your stomach, move in, it is yours!

Fourth Chakra: Your Heart Chakra
Venus is the ruling planet of the Bull and the heart, the fourth chakra. Your ability to sympathize with a situation can lead to financial gain as easily as it might lead to a true and lasting formation of endearment and love. The Taurus love of luxury is centered in the heart chakra, with Venus, the ruler of beauty, its guide.

Fifth Chakra: Your Throat Chakra
The Twin is ruled by the planet Mercury. This is the planet that empowers the throat chakra. You have a chance to gain the confidence of others by explaining your ideas, and simultaneously can gain great influence over a large number of people by getting the word out. Your power comes from the feeling of air passing the point in your throat that swallows.

Sixth Chakra: Your Third Eye Chakra
This is the psychic center of your central nervous system. We are all psychic in one way or another but the Moon rules Cancer, which allows the Crab to comprehend what is coming with little effort. Trust your visions of what is to be and keep the space above the center point of your eyebrows as clean and uncovered as possible.

Seventh Chakra: Your Crown Chakra
It is so much like the royal Lion Leo to be associated with a crown. Your sign is ruled by the Sun itself, which is most powerful in the space above your head. You are most empowered in situations where you understand what is going on and can lead the implementation of a great solution.

Fifth Chakra: Your Throat Chakra
As your Mercury ruler influences your need to gather information and communicate based on the data, so you will notice that a sense of power and wellness arrives whenever your throat is in tip-top shape. You do not have to engage in public speaking, just be ready to precisely deliver the facts

Fourth Chakra: Your Heart Chakra
Your Venus ruler is the planet of love and aligns well with the heart chakra. You can love with abandon and make a partner thrive on your giving of affection. Your natural compassion lends itself to creative projects. Your empathy for others taps a wellspring of shared sentiment and makes you a success in bonding with others.

Third Chakra: Your Solar Plexus Chakra
Although Scorpio is often associated with the sexual impulse, your ancient ruling planet of Mars lines up a little farther up your torso above your navel. Your lust for power and ability to make the most out of a gut feeling makes this chakra your power center. .

Second Chakra: Your Sacral Chakra
Jupiter rules the navel (sacral) chakra of your body. This is the expansive planet that rules Sagittarius. Consider the expansions of sexual arousal and pregnancy that occur in this region of the body. Sagittarius has a boundless optimism in life and all of your projects can be seen as expansions, like filling a belly.

First Chakra: Your Root Chakra
Saturn is the farthest planet that we can see with the naked eye. This planet is the boundary of the visible solar system. Capricorn is stable in hierarchies that are clear and contain room for getting ahead. You are most empowered when your root chakra is moving toward a slow, steady advancement.

First Chakra: Your Root Chakra
The base of the spine is the boundary for the torso and like Saturn, the ancient ruler of Aquarius, this chakra sets limits. Aquarians are legendary for understanding the bounds of good taste and manipulating the situation for personal gain. You are most powerful when your audience feels grounded in your story.

Second Chakra: Your Sacral Chakra
The Pisces ability to interact and achieve in the non-verbal sphere is powered by the navel (sacral) chakra, the second chakra. Your ancient Jupiter ruling planet assists you in moving into big projects without the hassle of getting organized. Jumping in with a thrust is a vital part of your power chakra.

Tweet0Pin0
What Are You Running From?
Psychic Insights: Your Soulmate’s Halloween Costume

What Were the Salem Witch…

How to Make Peace with…

What is an Angel Reading?

An Intro into Feng Shui…

What is Aura Cleansing?

What is Reiki Healing?