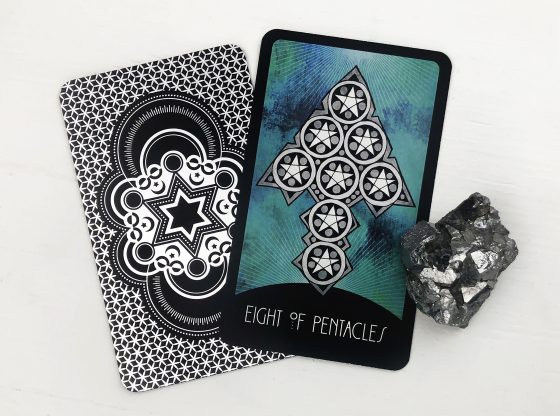 The Eight of Pentacles reversed means something has either gone too far or isn’t going far enough. That sweet spot where you’re moving in the right direction and getting the rewards you seek for your work is nowhere to be found. This doesn’t necessarily mean everything is going to be horrible, but this is a situation you can’t ignore. You need to make a decision about whether to continue on your path or make some changes.

The Eights and the Pentacles

Eights are an interesting number because so many people associate eights with luck and money, yet this is not what that number means in the tarot. Here, eights indicate a course of action — not necessarily one that actually involves doing something, but one in which you’ve chosen a direction to move in. For example, the Eight of Wands shows eight wands all flying toward the same point; this is the energy and action of the wands directed at a goal, and the energy brings a swift result. The Eight of Swords shows a person bound and caged by eight swords. She may not be doing anything physical, but she is intellectually and emotionally stuck, with the indication that her course of “action” is to not be able to go anywhere.

The reversed version of the card means something has gone off the rails. Pentacles are methodical, so it could be that you’re trying to rush and not take the care needed to properly complete work or a project. You need to slow down and take things step by step if you want to succeed.

It also could be that maybe you don’t yet have the skills for something you want to do. You’re jumping ahead and not getting the practice that could help you do well. It is always possible that you’d be a natural at whatever it is, but honestly, even “naturals” need to practice. If you skip all that, you’ll quickly hit a wall in terms of advancement.

Other interpretations involve taking that focused-path energy much too far. Maybe you’re practicing and practicing, but you’re practicing one particular thing and not getting familiar with other details. That results in a lopsided product or skill that looks really good in parts and not-so-good in other parts. If the card shows up in a non-material spread, like for a relationship, it could be that you’re concentrating on only one aspect of the relationship, or you’ve got specific ideas of how the relationship should progress — but your partner might not want the same things, or you could be neglecting much of the relationship in order to concentrate on this one detail.

You may also be too hard on yourself as you practice. It’s OK to make mistakes as you learn; don’t scold yourself if you’re not doing things perfectly each time, especially when you first start learning.

You may also be in over your head – an interesting thought considering the worker in the card’s image is now upside-down and awkwardly placed. Maybe you’re thinking of quitting because things seem to be going so badly. But are they really? Step back and really think about whether this is real or just your perception.

Finally, maybe you’re learning and working and practicing, but you are going nowhere. There’s no room for advancement or no call for your skills. You’ve kept on working, but it’s not taking you where you thought it would.

Where Is the Card?

The meaning of the card based on its position in the spread is pretty clear-cut. In an outcome position, your skills may suffer, find no outlet, or otherwise cause issues as a result of the events leading up to that outcome. In a past position, your skills or lack thereof could have negatively impacted the situation, and you may be dealing with the aftereffects.

And of course, if it shows up in a position relating to another person, that indicates someone else is either in one of the pickles mentioned previously, or that person is not appreciating or agreeing with your skillset.

Because there are so many potential interpretations – they may stem from the same place, but they go in slightly different directions, like squid arms – it helps to have someone else take a look at the situation. A professional tarot reader can go over a spread with you and try to tease out the specific information you need.

Once you have an idea of where this situation is getting off-track, you can take steps to fix it. You may have to change course, but in the end, you’ll find the right way.

Keen Editorial Staff
Keen's Editorial Staff is made up of world-class writers, astrologers, psychics, and advisors with diverse experience and spiritual sensitivity.
Dreams About Weddings & What They Mean
Eight of Wands Reversed Tarot Card