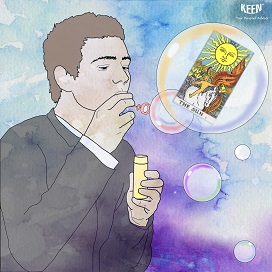 One of the saddest things about growing up is not so much the loss of innocence, but the loss of our ability to connect with our authentic selves and to embrace possibilities for the future other than what the status quo dictates. As we mature, the structure of our destiny, like a ladder, is often built on a series of rungs contrived of responsibility, guilt, and expectations. The higher up you go, the harder it is, not only to get back down if need be, but to clearly see who you were when you started the climb. As you move further and further away from your inner child–whose eyes were filled with wonder and whose dreams knew no limitations–the harder it becomes to remember the person you were before you became the person you are.

But, whether merely distanced or forgotten, that person is still inside of you. While you may no longer hear it or heed it, the voice of your inner child still speaks to the truths about the person you have yet to become. Of course, some forces of fate are beyond our control, but if you are able to tune back into that original voice, the voice you trusted before layers of learned behavior clouded its clarity and stifled its messages, it can often reveal a path that you might otherwise have overlooked; one that leads toward enlightenment and fulfillment.

When I first spoke with Michael, he exuded an aura of world-weariness and resignation. If I closed my eyes, I could picture him, much like Jacob Marley’s ghost from Dickens’ “A Christmas Carol,” a phantom entangled in ectoplasmic chains, dragging the staggering burden of his past psychological baggage behind him. Fortunately, however (as with Ebenezer Scrooge, who was able to rediscover the true meaning of Christmas before suffering a damning fate), there was still time for Michael to shed his shackles and get back on the road to being the person he was meant to be.  He just needed a little help turning up the volume on his inner child so he could hear the wisdom its voice was attempting to impart.

Michael’s father had passed away suddenly, while Michael was still in high school. As the eldest, as soon as he graduated, rather than heading off to college, Michael went out and got a job to help support his mom and sisters, and began taking night classes to get his bachelor’s degree. While Michael rose to the challenge, it was as if he’d gone from being a carefree youth to an adult with adult responsibilities overnight.

Through hard work and perseverance, Michael eventually started up an IT business, and grew it into one of the most successful in its niche. A few years down the road, and he’d more than ensured that his family would never want for anything, which had been his initial goal. But now, he simply felt lost. Having spent so much time making sure everyone else had what they needed, he’d put his own dreams on hold for so long, he could barely remember what they were.

I directed him to concentrate on his feelings with regard to the trajectory his life had been taking up to this point, and to visualize himself in his current role. I concentrated along with him while shuffling the cards. Once he had the picture in his mind, I asked him to randomly select a card. The Nine of Wands revealed a feeling of desolation, and a huge weight of responsibility borne alone. The figure is tired, perhaps injured, but cannot leave what he has started.

Next, I asked Michael to think about what it would be like to let that burden go. If he were able to be anything, go anywhere without attachment, where did he see himself? The card he chose was the Page of Swords. This card signals the chance of a new start as a brisk, invigorating breeze blows across the landscape, clearing stagnation and cloudy skies, and a young man boldly facing the challenge, is ready to take on whatever the world has to offer.

“And what do you think is holding you back?” After some thought, Michael selected The Hierophant. Not a bad card, but one that spoke to sacrificing the goals of one for the needs of a larger group, and of individuality long sublimated to a way of life that might no longer be serving him.

Finally, I asked Michael to focus on the force he should concentrate on to transform the current picture into the picture that presented a landscape of positive change. The card he next chose was The Sun. A young child, naked and carefree rides under a bright blue sky in the warm sun. His mount, a sturdy white horse, appears surefooted and headed toward a bold, happy future.

“What do you suppose that means?” he asked.

“I would say that’s you, embarking on a childhood dream,” I told him. “Was there something special you’d wanted to do before your dad passed away? Maybe some plans you made together?”

“You know,” Michael said, “I haven’t thought about it in years, but Dad and I always talked about building a ship and sailing it around the world. He was a wonderful carpenter. He even had the plans all drawn up.”

“Do you still have them, by any chance?” I asked.

Michael frowned for a second, then, as if a switch had been tripped, he remembered. “I hid them up in the attic when Dad died,” he said, a smile lighting up his face. “I’m pretty sure they’re still there.”

When Michael checked in some months later, I learned he had turned control of his IT firm over to his two sisters, and was in the process of having the sailboat built. “I’m not nearly the craftsman Dad was, he admitted, “so I’m getting some help, but I can’t remember the last time I felt so peaceful. It’s like Dad’s right here with me, guiding me along. Do you think he’s always been looking out for me, and I just never knew?”

“I think there’s a good chance that’s true,” I told him. I explained that sometimes, we’re so focused on getting through the here and now, we simply forget to listen with our hearts, and may be missing out on valuable input the universe is sending our way. “Now that the channel’s back open, I’m sure you’ll be getting lots of beautiful messages.”

Do you feel out of touch with the person you were meant to be? A KEEN tarot advisor can help you reconnect with the real you to achieve the future you were destined for.