How a Tarot Reading Gave an Architect from St. Louis Some Much Needed Career Guidance 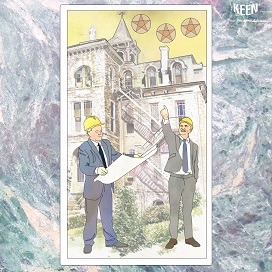 Some people move through life without a clear career goal or direction. While a lucky few of these rudderless folk actually fall into a line of employment that suits their temperaments and skills, many others simply drift from one job to the next, never finding fulfillment. Then there are the serious souls who find their calling from an early age, and set about pursuing their passion, no matter the financial or emotional cost. And finally, there are those who allow their interests to develop over time; who are able to weigh the pros and cons of possible work-related choices based upon careful reflection, and generally find themselves in a career at which they excel, that also brings them emotional and financial satisfaction.

But even the most mature, reasoned person who has carefully crafted the course of a career can reach a crossroads, or just plain hit a wall that they cannot seem to find a way around. When that happens, a tarot card reading can often reveal hidden forces on both sides of the job equation–whether it be something you may not clearly see that’s holding you back, or an opportunity on the horizon of which you are yet unaware–that will eventually decide the future of your career.

Building on Your Assets

When Tim, an architect, came to me, he had reached just such an intersection at his current job. Tim had discovered early on that he was adept at mathematics and enjoyed working with his hands. As a teen, he’d helped his dad, a highly skilled (albeit amateur) craftsman, with a number of DIY projects around the house. In fact, one of their proudest father/son accomplishments was bumping out the walls and creating a gourmet kitchen for Tim’s mom that included a skylight and exterior deck.

After high school, Tim wisely decided to translate this skill set into the study of architecture in college. A gifted student, he graduated near the top of his class been and had been offered a job at a prestigious local firm not long after he received his Master’s degree. While Tim greatly admired his employers for their honesty and integrity, more and more, he found himself chafing at their conservative design approach–for a company working in the shadow of St. Louis’ dynamic Gateway Arch, they certainly did like to keep things traditional. The business was stable, but somewhat stagnant. Tim yearned to be involved in a more cutting edge approach to construction, and was especially fascinated by new forms of “green building” and sustainable architecture.

Tim was excited when he first learned his firm would bidding on a contract for an enormous new mixed-use living and retail community space that was being planned in a neighboring town. Brimming with enthusiasm, he worked up some preliminary drafts and designs for the initial strategy meeting, only to discover the higher-ups had already commenced one of their competent-yet-conservative plans for the project, and they expected him to pitch in.

Not one to shirk responsibility, Tim had taken on his assignment, determined to do his best, but his boss couldn’t help but notice Tim’s lack of enthusiasm. When she called him on it, Tim blurted out the truth. “She didn’t seem all that impressed with my idea,” Tim told me, sadly, “but she did ask to see my preliminary work and the supporting figures, so before I left last Friday, I gave them to her so she could review them over the weekend.”

With Monday and Tuesday gone, and Wednesday nearly over with no word, Tim began to worry. End of day Wednesday, Tim got an email from his boss to put his work on hold, and informed him that she and the other partners wanted to meet with him Friday morning. What the meeting would hold, Tim could only surmise, but now that he’d drawn a line in the sand, would he have the courage to hold to his convictions? It wasn’t likely they’d fire him, but Tim wasn’t sure he would be happy continuing on at the firm without more creative input.

I could see that Tim was pragmatic by nature, and while he liked to study all the angles before making a decision, he’d probably prefer to cut to the chase. I decided that The Three Fates Spread would offer insights into the big-picture question Tim posed, and hopefully arm him with the answers he sought to make an informed choice about his future, without overloading him with too many esoteric factors.

Tim and I both concentrated on his job situation while I shuffled the cards. I asked Tim to focus on the path that had brought him to his current juncture, and had him cut the cards into three piles. “Now, put those back in whatever order you choose,” I instructed, and “this time, think about the present situation.” When he had completed the task, I asked him to cut the deck one last time and concentrate on a final outcome.

Tim handed me the deck, and I dealt the top three cards. The first, which symbolized the past, was the Eight of Pentacles, which seemed almost a perfect metaphor for Tim’s studious nature and the discipline he had utilized to achieve his present stature. However, the card, while positive, also seemed to indicate a period of apprenticeship that was now drawing to a close.

For the center card, which represents the present atmosphere surrounding the question, Tim had drawn the Page of Wands. This card signifies bold thought, renaissance, and personal re-invention. It served as a validation that not only were Tim’s ideas sound, but they would take him to the next level in his career if he had the perseverance to follow through on them.

The third card, which represents the final outcome should Tim stay the course, was the Three of Pentacles. “You’re going to become the go-to guy, Tim,” I revealed. This card suggested that soon, it would be Tim’s expertise people sought out, and his designs that would be implemented. “I’m not sure if it will happen at your current job, or with a future employer,” I told him, “but my advice is to stick to your guns.”

The Cold Light of Day

Friday morning, Tim was ready for his meeting. He’d decided that green building was the future, and if the firm wasn’t on board, he’d give them ample notice, and then move on. As it was, he needn’t have worried. The next time we touched base, Tim revealed the meeting had not gone as he thought it might.

Tim’s boss, a savvy businesswoman, had studied his preliminary plans and figures. “Green building is a departure for us,” she’d admitted, adding with a laugh, “but I don’t think we can afford not to move into the current century.”

The company settled on drawing up two proposals for the upcoming project: one traditional, and one based on Tim’s work, and submitting both. They were still awaiting a decision on whether or not they’d get the contract, but in the meantime, Tim’s boss had offered him a role as team leader in a new division that would focus on sustainable architecture, which he gladly accepted.

Are you at a crossroads where you work and need some insightful career guidance? Let a KEEN advisor show you which fork in the road to take for the best possible outcome.

Keen Editorial Staff
Keen's Editorial Staff is made up of world-class writers, astrologers, psychics, and advisors with diverse experience and spiritual sensitivity.
How Michael from San Diego Used the Tarot to Reconnect with His Inner Child
Using the Tarot Relationship Spread to Get a Good Read on Your Partner