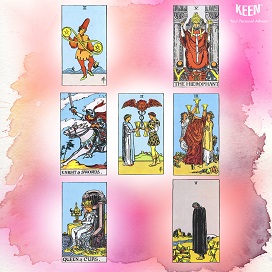 The dynamics of every partnership are based on dual egos. For the most successful pairings, the two personalities seem to flow in unison, each complementing the other’s strengths and shoring up their weaknesses, in such a way that both move continually forward and as they strive to achieve similar goals.

In other partnerships, the conjoined personalities can seemingly appear as polar opposites of a given  continuum–like dark and light, yin and yang, good and evil. One simply cannot exist without the other for the world to be whole–and yet, the formula still works.

And then there are couples that behave like oil and water. As with the scientific principle of emulsification, when two dissimilar ingredients are first introduced, they can be shaken, stirred and excited enough to bond together in a tasty or successful combination, but over time, their unique molecular structure dictates that they will eventually separate and retreat to their own side of the dressing bottle, where they will likely remain, unless external forces intervene.

Should the Party Girl Slow Down?

When Laura came to me for a consultation, she’d been dating Dustin for about two years. They’d recently been discussing marriage, but Dustin seemed to run hot and cold on the subject. Laura wasn’t too concerned, as she had a lot on her plate and wasn’t in a hurry to settle down. Over the past few weeks, however, she was sensing a distance from Dustin that she had not previously felt. She wondered if they were drifting apart, and if so, would it be best to just end it now, or was the relationship actually worth saving?

When a relationship gets stuck in a rut, falls asunder, or hits a wall, a partner-centric tarot reading can often uncover the keys to hidden issues that can keep your pairing from either reaching its full potential or running smoothly. The seven-card Relationship Spread, while also helpful for business partnerships, is ideal for getting to the core of matters of the heart–so that’s the spread I chose to look deeper into Laura’s situation with Dustin.

The card at the top left represents how you see yourself.

Laura told me that while she was for the most part happy, she was also extremely busy, and the Two of Pentacles, which depicts a young man juggling a pair of large circles, while managing to maintain his footing–just barely–seemed to bear that out. She loved the time she spent with Dustin, but admitted that between her PR job, a jam-packed social schedule, and family commitments, there weren’t too many hours left to devote to their relationship, and that Dustin did, at times, feel left out.

The card at the top right signifies how you see your partner.

One thing Laura appreciated about Dustin was that he was a steadying influence. When things began to overwhelm her, he always seemed to be able to give her actionable advice to put things in perspective. Like the Hierophant, Dustin was a creature of structured beliefs who combined both rules with a belief in keeping things in a proper order. (Having had a fairly tumultuous childhood, Dustin sometimes equated a sense of order with a feeling of security, and came a bit unhinged when he felt out of control.) He did have a tendency to be a little too “by the book,” and lacked a certain sense of what Laura termed “artistic flexibility.”

The card in the center left signifies the way you feel about your partner.

The truth of the matter was that at the moment, Laura was angry with Dustin. The last time they’d been together, she began to describe all of her dreams for their future. Dustin’s reaction had been less than optimistic, and they’d argued, at which point he accused her of being childish with her head in the clouds. So here, the Knight of Swords indicated that Laura felt Dustin had trampled her feelings by rushing to conclusions without actually listening to what she had to say. She had merely been dreaming of a future, not planning the actual steps to get there.

The card in the center right signifies the obstacle that stands between you.

The Three of Cups depicts three merry women who are dancing, drinking, and generally appear to have not a care in the world. The camaraderie may be healthy, and joyful, but it can get out of hand if you’re not careful.

When your life is party-central, it’s likely that one or the other person in the couple may get party-pooped sooner than the other. Likely in Laura’s case, she was still riding high on being the quintessential party girl, while Dustin’s more sober attitude was causing him to feel discomfort and pull away.

The card in the lower left signifies the way your partner sees you.

Wise, kind and gifted, the Queen of Cups can also be aloof and unknowable. As much as she may possess every quality you desire, you may not have a clue how to get her to open up and bestow those gifts upon you. As much as Dustin appreciated all of Laura’s finer qualities, he feared he was ill-equipped to fit into her world or move comfortably in her social milieu.

The card in the lower right signifies what your partner feels about you.

The Five of Cups represents a sense of loss and disappointment, but not utter defeat. While three of the cups have been overturned, two remain upright, leaving the person something to fall back on, and should they choose, begin again. Unfortunately, the balance, which seems to favor having more to lose than to gain, doesn’t necessarily suggest that outcome.

Dustin was afraid of having his heart broken by a girl he loved, but could not understand or control. His back was turned on the positive, while he focused only on the negative. Perhaps if someone gently suggested that all he need do was turn around and let go of some of his need for order, it would still be possible to find happiness.

The card at the center represents the partner relationship in its present form.

The Two of Cups in the present position indicates that while there may be many challenges, the partnership is based in equality, and that this can be a time of not simply reconciliation, but rebirth. The key to moving forward as a couple will rest in both partner’s willingness to compromise. This does not mean they should give up who they are to please the other person, only that they should do their utmost to appreciate one another’s concerns and needs, and integrate them into the fabric of the relationship.

I told Laura if she wasn’t done partying and didn’t really feel ready to settle down, it would be kinder to let Dustin know sooner rather than later. Sometimes timing is everything. Perhaps he’d come along in her life too soon, but while he might have his insecurities, at the end of the day, Dustin had always hoped to win her heart. On the other hand, if she were willing to sit out a few turns of the madcap social merry-go-round–there was no need to get off the ride completely, just dial it back–and address Dustin’s concerns that she truly possessed the wherewithal to make a relationship last, theirs could be a happy and loving partnership for years to come. The choice was hers.

Are you in a relationship, but you’re not sure it’s the best fit? A KEEN tarot expert can decipher if you’re well suited for one another, or need to make major alterations.

Keen Editorial Staff
Keen's Editorial Staff is made up of world-class writers, astrologers, psychics, and advisors with diverse experience and spiritual sensitivity.
How a Tarot Reading Gave an Architect from St. Louis Some Much Needed Career Guidance
The Shadow Truth Tarot Spread