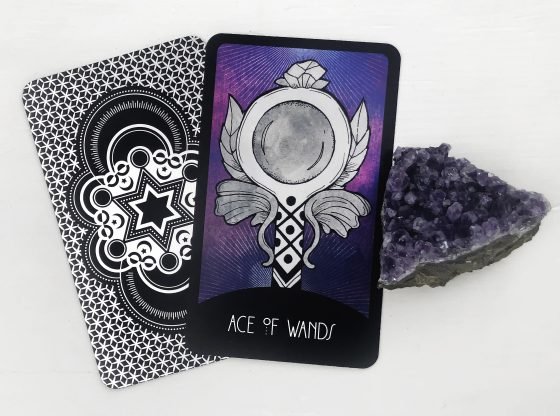 Ready, set, no! That’s what you might be dealing with when you pull the Ace of Wands reversed. Your new plans and new project may have a bumpy road ahead that, while not definitely unsuccessful, certainly dampens your happiness if you don’t confront the situation. The Ace of Wands reversed is a card of blockage, either internal or external, and it’s a big freaking hint to rein in that energy that could lead you to make a mistake.

Wands and Their Reverse

Wands are the action cards, the ones that indicate movement and taking charge. These are the cards that drive your life forward, that make a project progress, and that give you a swift kick to get you moving when you need it. It’s no surprise that the Wands are the first suit of the Minor Arcana, kicking off those detailed plans and life events.

Reverse those Wands, though, and you get stunted energy. Maybe you feel blocked and end up procrastinating when you should be working. You feel no enthusiasm for something despite everyone telling you that you should. You feel stuck.

Wands can also be a bit martial. After all, the staff has long been a weapon to attack and defend. Reversed Wand cards can be wildcards.

There’s also an element of planning and guidance, such as what you see in the Two of Wands and Three of Wands. So, reversing a Wand card, even if it isn’t one of those two specifically, indicates going off-course or not seeing the full picture.

Aces and Their Reverse

Aces are beginnings and initiations. That’s why they start off each suit; they start the slow climb up through the numbers until you reach the court cards that personify the qualities of each suit. Reverse an Ace, though, and you get stops and starts, and inconsistent energy. Maybe you keep trying to start writing your new book, and someone keeps interrupting you. You finally land a date with that hot guy but end up having to constantly reschedule. You want to move house, but the move keeps getting delayed.

When you get the Ace of Wands reversed, you start something new only to find your enthusiasm and energy levels seem prematurely drained or the new thing keeps running into speedbumps. You’re not feeling very free at this time, or, if the card is in a future position in a spread, you may end up feeling unusually blah about something you thought you wanted. It feels like the universe is just not on your side.

Given that the Ace of Wands reversed has that wildcard quality, it can also mean a surprise event. You’re planning to move, you find your new place, you get to the new city — and your new job changes drastically in just a few weeks. You’re a shoo-in for that juicy part in an indie movie and have been receiving tons of compliments over your audition — only to find at the last minute the director went with someone else for the role. Never fear, though; treat those situations like one door closing so that another can open. Keep your eyes and ears trained on everything you can for an opportunity that you can grab.

Many decks use a variation of the classic Rider-Waite image for the Ace of Wands: a hand extending from a cloud, holding one long wand with small leaves growing out of it. It’s common to see the thumb of the hand pressed up against the wand and maybe a few leaves floating in the air beside it.

Turning the image upside-down is telling. That thumb now points down, making the hand look like a thumbs-down sign. That’s a straightforward representation of how you might feel about a situation. Here you are, holding a figurative relay torch; you should be off and running for whatever it is you’re supposed to be doing. Instead, you’ve got your hand upside-down in a definite display of unhappiness. What’s more, those floating leaves now look like they’re falling down, flaking off the wand.

But this too is a swift kick. If you are happy about something new coming up and pull the Ace of Wands reversed, that’s a signal to keep an eye out for something that isn’t going to seem right. Do you have a nagging feeling about the something-new that you keep pushing aside? Take a deeper look at it because you might find you have some doubts that need to be addressed. They can be as simple as your own critic-voice and fear of failure, but they’re there, and you need to deal with them in order to move on successfully.

Are you hiring someone new in your office? Perhaps extend the search a bit even if you think you’ve found the best person right at the start because there could be something going on that would upend the situation. Perhaps a non-compete agreement that the applicant forgot about, which would send your search back to the drawing board.

That’s a highly specific example, but it shows you the type of weirdness that the Ace of Wands reversed can indicate. Hang back, take it slowly. Don’t rush anything or seem super-enthusiastic until you’re satisfied that it’s safe to be that way.

One thing to avoid is becoming overly hyper-vigilant, which sounds like hyperbole. But it’s possible to get so caught up in looking for something to go wrong that you basically make something go wrong. A reversed Wand card, especially the Ace, means slow it down and be a little more cautious, but don’t assume the world is out to get you.

Before you worry too much that everything is going to fall apart, get an online tarot reading. Investigate what might be throwing a wrench into the situation. And remember, when something throws a wrench into your plans, you’ve just gotten a free tool to make some repairs.