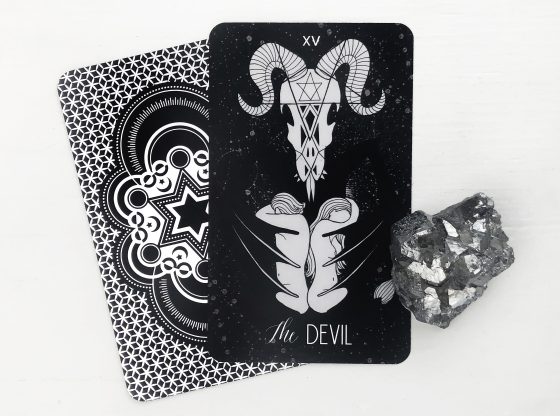 The Devil is one of those “scary” tarot cards that doesn’t look like it’s going to hold a good message for you. And it’s true that the Devil card itself carries a not-so-cheery meaning. It’s not really a card you want to see in a spread except in a spot for past influences or very general thoughts. But it’s a valuable card, especially if you get it in its reversed form. The Devil reversed can go a couple of different ways, but in either case, you get the tools to deal with its message.

The upright Devil card is straightforward. You’re in bondage. You’re blocked, trapped by something or someone, and you’re unable to move forward. Many decks use a version of a huge, bat-winged, goat-legged, horned devil holding chains that connect to manacles around the necks of a man and woman. These chains represent habits, addictions, attitudes, and thoughts that are making you unable to live your life in the fullest way.

The Devil in some other decks is presented as Pan, the mythical god, and is more in line with being wild and uncontrolled, which itself is kind of like bondage because you become beholden to that impulsive side that prevents you from looking ahead.

The Devil reversed is one of those rare tarot cards where a possible meaning is actually really nice! If the upright version represents being bound or trapped, the reversed version is freedom, the shackles being opened and removed. You’ve broken through whatever bonds were holding you back (or, if the card is in a future position, you’ll have the opportunity to break free). The tarot is often described as a journey, with each segment illustrated by a card, so this is apt — it’s the point in the story where you get to suddenly zoom forward.

Another essentially good interpretation is that you’ll see past deceptions and illusions, though it can hurt at first – for example, you find out your spouse has been cheating on you and lying about working late and so on for months. That doesn’t sound so good. But now you know and can act on it. You can get away from a cheating spouse, or — if you prefer — work on healing, assuming the affair ends.

Talk to a love and relationship psychic on Keen if you’re seeking additional clarity and guidance for your circumstances.

The upside-down image of the horned devil holding chains now has the Devil falling away, while the man and woman still have their feet planted firmly on the surface of the upside-down world. The one warning is not to let yourself get carried away so that you end up being dragged down by the temptations of that fallen devil.

A different interpretation of the Devil reversed has the bondage increasing and taking on a chaotic nature. You’re trying to break free and not succeeding or, worse, you’re trying to break free and only making the bond stronger. If you’ve ever looked at a book on manifestation and intention, think of the times you realized that you were focusing on the very thing you wanted to avoid, such as debt – instead of getting what you wanted, which was to get rid of the debt, you got more of what you didn’t want (more debt) because you placed so much mental energy on the presence of the debt. The Devil reversed is at work there, tricking you into making more chains yourself.

If your tarot card deck presents the Devil as Pan, the Devil reversed can indicate either a calming of wild energies or a possible negative separation from the natural material world. Maybe you’ve gotten too involved in online arguments and need to get out more.

Take one more look at the Devil holding the chains. He’s an unhappy guy, grimacing as he squats on his little perch. He doesn’t really seem to have a neck, does he? Hunched over, neck retracted, shoulders up around his ears… this is a tense dude, and that tension is also something that could have been holding you down. Relaaaxxxxx….. If you were tense and tried hanging upside-down, what would happen? Your neck would elongate a bit, your shoulders would relax, you’d feel some of that tension fading because you just can’t keep yourself tensed in that position.

When you see the Devil reversed, consider tension as those neck shackles and consciously try to ease up on yourself. Sometimes relaxing and taking a break, is all you need to find the key to those locks.

A lot of what holds you back is psychological. That’s not to say external blocks don’t exist; of course everyone faces different problems. But many times, when you think you’re blocked, you’re really just tense and letting yourself relax can help you think of different ways around your situation. It’s all in how you look at things. If something “bad” happens, or if you feel blocked, check your perception along with other potential issues and causes.

As usual, slow down and evaluate, but don’t wait too long to act if you have an opportunity to do so. Because the Devil reversed can potentially mean making your own bonds worse and falling prey to chaos, you don’t want to be too impulsive in your bid to get away.

If you want further help determining whether your bonds are loosening or the chaos is increasing, get an online tarot reading for a full spread and interpretation. The Devil reversed is fairly simple to interpret when you see an entire situation laid out on a table.

So, when the Devil reversed shows up, take heart. Your bonds may soon be a thing of the past and your future is ready to begin.

Keen Editorial Staff
Keen's Editorial Staff is made up of world-class writers, astrologers, psychics, and advisors with diverse experience and spiritual sensitivity.
How to Face Your Fears
Silver Aura Meaning & Personality