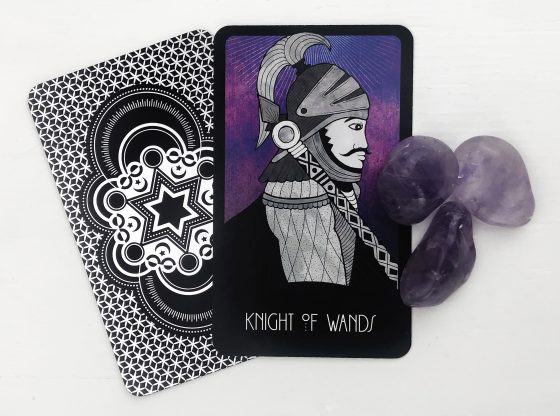 Again With the Knights and Wands

To review, the knights are action and energy. No matter the element of the tarot card, the knight is the one who starts actually doing something with the element. A page or princess may get the idea to do or say something, and the knight will provide the energy to get going. Wands are the suit of real action, pure physical movement, so the Knight of Wands is the guy you want to see when you are ready to get going with a plan that you came up with. No more creating the plan or putting everything into place before you go; now it’s time to physically do something about it. This can also imply actually traveling or even moving house, often on a rather fast schedule.

As a court card, the Knight of Wands is typically a red-headed young man, though women can embody this energy as well.

Reversal of Energy and Action

The reverse is where the Knight of Wands goes from being the card you want on your side to the card that potentially alarms you. Before you actually do get alarmed at this tarot card showing up in your reading, though, remember that these cards can represent a whole range of issues depending on your question and the point in the spread where they show up.

One less-alarming meaning of the reversed card is a blockage of energy. You’ve got to get going, but you’re just too tired. You’ve got to move house, but you can’t find something that would be livable, or maybe you’re in an expensive area where you’re just not qualifying because the rents are too high. Or the move is a go, but it’s really disorganized. You’re ready to get going on a work project, but everyone around you is creating obstacles. You’re ready for your road trip only to encounter a heck of a lot of traffic.

But a more intense meaning is that something has gotten out of control. You’re so ready to get going that you start acting impulsively, creating more problems for yourself. Or maybe that new guy you’ve started dating suddenly wants to move way too fast. Work has become chaotic. It’s possible that the meaning here is rather subtle; things won’t go as smoothly as you’d hoped. But there is the potential for things to go wildly off course, or for someone fitting the description of the Knight of Wands to be an actual personal version of a wildcard.

Look at the visual of the upside-down card. The fringe and ornamental feathers attached to the knight’s helmet and suit of armor, which in the upright card drift down, now look like they’re floating up — much like flames. This knight’s energy has become so wild as to be like a wildfire. What’s more, instead of a horse rearing up, ready to go, you have the horse and knight falling away from the earth, with nothing beneath them to stop them from falling forever. Impulsive energy can send you in directions from which you won’t recover.

This knight’s reversed energy is so intense that, if you get the card in a position that implies he’s a romantic interest, you may want to approach him with caution, or someone around him. Remember, sometimes it’s not the person you date, but one of his friends or family that becomes a real problem – or even one of your friends or family members.

This is not to say that the card indicates you shouldn’t move forward. But be very aware of red flags and try to determine where this knight’s energy is showing up. (Caution: Don’t become the Knight of Wands reversed yourself by assigning the energy to someone who doesn’t deserve it, and then heaping alarm on that person.) Wildfires throw out sparks and create new hotspots and you need to figure out where the source of that fire is while still being careful of the sparks.

So, now that you’re staring at this reversed tarot card wide-eyed, take a deep breath and exhale slowly. It is possible that the blockage or weird energy will be minor. But you need to know about the potential problems just in case. If you start to encounter blockages, obstacles, or overly energetic people, stop. A meditation practice would be a good thing to start now to help keep your energy in check.

You may also want to do some clutter clearing or tidying. That type of energy in your surroundings can make you feel out of control in subtle ways.

Because this card’s interpretations are rather straightforward, it’s one of those cards that lends itself well to further investigation. A tarot reading online with follow-up readings can be very helpful here, especially because the more you know may help you figure out whether you’re dealing with something serious, or something that’s just frustrating.

If you get the Knight of Wands reversed, keep your sense of humor, but also sharpen your senses. If you can see clearly where the issue lies, you can figure out a way around it.

Keen Editorial Staff
Keen's Editorial Staff is made up of world-class writers, astrologers, psychics, and advisors with diverse experience and spiritual sensitivity.
Spring Into Action
Align With Your Inner Being