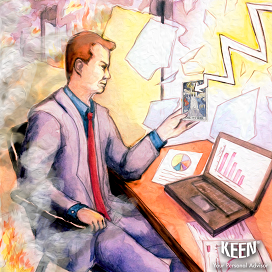 Many entrepreneurs who are considering embarking on a potential business enterprise like to consult the tarot prior to taking the first steps, in order to ascertain whether their venture will have legs, or likely fold before it can truly take flight. The tarot can be a good barometer of the general climate for investing in a new launch, because a sound reading can reveal pitfalls and unforeseen problems that might arise during the planning and building phase that might potentially lead to failure. Perhaps most importantly, however, the cards can also uncover the true nature of a business associate: divulging whether they are honest and aboveboard, or if they have more self-serving intentions that can leave those who are depending on them up the creek without the proverbial paddle.

A Recipe for Success…or Disaster?

When I spoke with Harry, he was having an uneasy feeling that his partner, Sam, was engaged in some sort of questionable behind-the-scenes or under-the-table activities that might be putting their business in jeopardy. The two were longtime friends who had both recently retired–but neither felt ready to stop working. Over the years, they’d talked about opening a little joint that had a red-hot jukebox, smokin’ barbecue, and a cozy bar that would seat a comfortable number of regular customers.

Harry, who regularly competed in barbecue challenges, had his eye on the perfect location for a couple of years. The former service station and luncheonette had stood closed for years, but he felt it had tremendous potential. The location got plenty of traffic, it had ample parking, and the retro-décor was a perfect match for his vision. So when a “For Sale” sign went up in the window, Harry lept at the opportunity. Sam seemed thrilled, too. The pair signed partnership papers, and set to work getting the place ready to open its doors.

For the first few months, business was booming. In fact, things were better than either partner had hoped. But then Harry began to notice a decline in the sales figures. The drop seemed odd, since the place was packed pretty much every night, but when he showed Sam the books, he’d simply shrugged and said, “Numbers don’t lie.”

Harry chalked up the troublesome accounts to the foibles of any new business, and decided to wait until the following month’s receipts were totaled before “it was time to worry,” as he put it. But when the figures went from black to red, he knew something was drastically wrong.

“Every business has its own story to tell,” I explained to Harry. “There’s a set-up, the main action, and the final outcome, but along the way, the main character–in this case, that’s you–can run into some pretty disturbing plot twists that will determine whether or not you’re headed for a happy ending.”

I asked Harry to concentrate on what he felt he brought to the partnership. “Think about who you are in the relationship,” I instructed, “and what your role is in the business.”

The card revealed, the Eight of Pentacles, seemed fitting. This card depicts a tradesman studiously pursuing his craft. He sits at a workbench, turning out a series of coins. This is a man whose vocation brings him both satisfaction and a sense of accomplishment, and for whom idleness is not an option. He’s filled up one entire side of the card, and yet, he presses on, although he’s already attained a level of comfort that surpasses his needs. “Sue always jokes that I’ll retire when I’m dead,” he chuckled, “but she’s not far wrong.”

Next, I asked Harry to concentrate on his partner, Sam. “Picture him sitting at the counter of your restaurant. Think about how what he does colors that picture and what his true intentions are.”

When the Five of Swords turned up, neither Harry nor I was surprised. Jagged gray clouds swirl over a wind-swept scene in which one competitor has obviously succeeded–at the expense of the others. But the competition, although perhaps evenly matched, does not appear to have been friendly. While no blood has been shed, the victor likely used less than fair means to attain his victory. “I don’t think Sam has your best interests at heart,” I told Harry. “He seems to be out for himself, and your business may be what he’s after.”

When I asked Harry to concentrate on the fate of the business should it remain on its current trajectory, the next card served to confirm my suspicions with regard to Sam’s hidden agenda. The Tower depicts major calamity. That which has been built is rent asunder by a bolt of lightning, as two figures fall toward jagged cliffs from a flaming edifice. Whether or not he is aware of the consequences of his actions, Sam has reaped a whirlwind, and should they continue on their present path, neither party will be spared a disastrous fate. “If you let things keep going the way they are,” I cautioned Harry, “the situation is going to get out of control, and there’ll be nothing you can do to fix it.”

“What should I do?” Harry asked.

I had him concentrate on the force he would need to bring to bear that would turn the tide in his favor. The meaning of the Judgment card seemed clear. This card depicts the Archangel Gabriel blowing his horn. The dead have risen from the sea and entreat him for mercy, but it is their own actions in life that will determine their destiny. While Harry had to look with clear eyes and make a decisive move to regain the parity in his partnership, his most effective weapon for dealing with Sam must be truth rather than blame. “Knowledge is power,” I told him. “Use it to your advantage.” I urged Harry to learn the facts as quickly as he could, and then confront his partner with them before it was too late.

When Harry hired a hidden-camera team to set up a sting, it was ultimately revealed that Sam, who had a gambling problem that Harry had not previously known about, was both cooking the books and making off with inventory, which he sold on the side. “I thought a lot about what you said,” he told me the next time we spoke. “I didn’t blame Sam, I just handed him the facts. He promised to get help, so we’re going to try to work things out.” The barbecue joint was headed back to the black, but Harry was quick to add, “From now on, Sue’s in charge of the books.”

I was relieved that the situation seemed to have found a positive resolution for everyone, and hopeful that with continued vigilance on Harry’s part, the restaurant would thrive and prosper for all involved.

Afraid your partner’s cooking the books? Worried your life’s savings may go up in flames? Let a KEEN advisor read the smoke signals and help get the fire under control.

Keen Editorial Staff
Keen's Editorial Staff is made up of world-class writers, astrologers, psychics, and advisors with diverse experience and spiritual sensitivity.
When Carla from Kissimmee Wonders, “Will My Daughter Ever Marry?” the Tarot Reveals a Surprising Secret
How a Tarot Reading Gave Sue From Skokie Deeper Insight Into a Career Dilemma