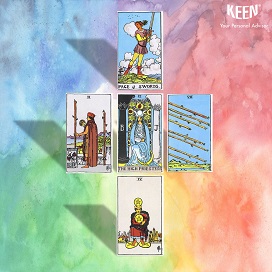 There are many times in life when we set goals or seek relationships that seem reasonably attainable, and yet, for some reason, continue to evade us. No matter how we examine the issue, there always appears to be something impeding our success–something that remains hidden.

Ironically, when this happens, the answer may actually be staring us in the face, but we simply cannot or will not acknowledge its presence, because it may involve something we that makes us uncomfortable or something we prefer not to see. The Shadow Truth spread, laid out in a simple, five-card cross format, is an effective means of getting to the truth of a matter. If you are in denial or working at cross purposes to your desired goals, it can unmask the factors that are holding you back from achieving the destiny that’s meant for you.

To Be Betrothed, Or Not To Be

When Amelia came to me for a reading, she had been in a relationship with Paul for nearly three years. Amelia was ready to move to the next step in the relationship. She wanted to get married and have a family, but Paul was hesitant. Paul was a decade older than Amelia, and already had two children from a previous marriage. His relationship with his ex-wife was cordial, and he was a wonderful father to his kids.

While Amelia understood Paul’s reluctance to move forward and take on the added responsibility of a second family, she was beginning to wonder if he would ever change his mind. As much as she loved him, she was actually thinking it might be time to break things off in hopes of finding someone whose dreams were more in line with her own.

I might have chosen another spread for Amelia’s reading–perhaps the Relationship Spread or the Three Fates Spread–had not she not casually mentioned that she “hated to have to go through the whole thing again.” It seemed that this was the third serious relationship Amelia was contemplating calling quits–for similar reasons.

Maybe Amelia just had bad luck picking men, or was there perhaps something else going on in her own psyche that was guiding her to make these choices?

Amelia and I concentrated on her question as I shuffled the cards. I had her cut the cards, still continuing to focus on her relationship, and then dealt out the five cards, face down on the table between us.

The card at the center of the reading reveals your current perspective on the issue at hand. The High Priestess is a card steeped in mystery that bespeaks both deep reflections and hidden truths. The chaste figure sits in a temple of knowledge surrounded by symbols from many cultures, and is flanked by a white pillar and a black pillar on either side, which represent beginning and completion.

For Amelia, this card suggested that there was more going in her relationship than it might appear. What is in plain sight paints one picture, and yet, it is what is beneath the surface that may be the most critical factor in whether or not her relationship will succeed or fail. The High Priestess is generally someone adept at coming to terms with reality, but might, at the present moment, be dealing with misinformation that she would need to process in order to make an informed decision. For Amelia, whether that information was coming via an internal or external source remained to be seen.

The card at the top augurs how Amelia’s perspective was changing, and would continue to evolve in the days ahead. The page stands, sword lifted, as a great gusting wind blows, ready to take on the world. Swords are cards of intellect and reason, so the battle is one of reason and logic. The Page of Swords also signifies cutting to the chase and getting to the truth of a matter. For Amelia, this meant she was now ready to face whatever had been holding her back, whereas in the past, she might have been content to maintain the status quo. She’d realized that a truth that no longer serves you must be cast aside, even if the new truth that would take its place had yet to be revealed.

The card to the right showed the beliefs and emotions that had shaped Amelia’s current perspective. The Eight of Wands stream like banners through the air. Since there is no figure represented in this card, it suggests that the momentum of the flying wands has been set in motion by the querent. For Amelia, this card was an especially good omen. The Eight of Wands bespeaks opportunity and fulfillment headed in your direction. Having started on her path to enlightenment, Amelia needed to stay the course in order to find the answers she was seeking.

This card exemplifies how the attitude you present to the outside world is perceived by those around you. A nobleman stands on a parapet of his castle. In his hand, he holds a globe as he surveys his domain.  He has riches, success… the world at his fingertips, but he also has a tendency to feel that he has a right to tell others what to do, even at times when such dominance is inappropriate.

To me, this card suggested that Amelia was perhaps pushing her agenda with Paul a little too hard. She had created her dream of a perfect world, and could not deal with the fact that her perfect world was not his perfect world. By forcing the issue, she was, in fact, creating tension that might not be there had she allowed the relationship to progress on a more organic level. And judging from his history as a provider and parent, there was also the possibility that Paul wanted, as many men do, to seek more mutuality and balance.

The bottom card reveals those truths you cannot or will not confront that keep you from resolving the issue. In this card, a lone figure is seated on a stone bench. His treasure is signified by a pentacle clutched tight to his chest, two more cached beneath his feet, and the fourth balanced on his crown–and it’s never out of his sight. He is removed from the world, and has no place to spend or invest his bounty. Is he held to his seat by fear? Denial? Or both?

For Amelia, this card meant that while she was adept with forming a world view and seeing it as her future, she lacked the capacity to see a picture that included the larger universe in which her world existed. Having decided she wanted what she wanted, Amelia had created and continued a pattern of finding men that looked like the perfect co-star to fill out her drama, but each had turned out not to be right for the part after all.

With Paul, however, Amelia still had a chance of having a bright future. But the fate of her success would rest in learning to broaden her dreams to include his dreams, so that eventually the union would be fueled by their dreams.

Is something you can’t quite put your finger on holding you back from the fate you desire? A KEEN advisor can reveal unseen forces that are impacting your destiny.

Keen Editorial Staff
Keen's Editorial Staff is made up of world-class writers, astrologers, psychics, and advisors with diverse experience and spiritual sensitivity.
Using the Tarot Relationship Spread to Get a Good Read on Your Partner
How a Tarot Reading for Love Helped Mary from Miami When Her Relationship Went South