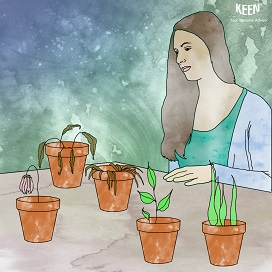 Love relationships don’t exist in a vacuum. If they did, it would be much easier to put them under a microscope and examine the specific characteristics that make them tick, or the flaws and failings that will eventually bring them to a grinding halt. But because love is part of a continuum, it is continually changing and evolving. Even as each new relationship we enter into takes on a life and history of its own, it is also informed by the lessons we (hopefully) learned from past relationships.

When a relationship has run its course, whether or not the outcome has been an unpleasant one, we are presented with an opportunity to examine our motives, desires, and the choices we make in pursuit of them. However painful the truth might be, it’s when we pay attention to this information, fine-tune our romantic objectives, and adjust our behavior accordingly, that the future romances we embark upon have an improved chance of long-term sustainability.

A Match Not Made In Heaven

I first met Mary not long after she’d broken up with her boyfriend, Timothy. As sad as she was, Mary had given the breakup a lot of thought, and on some level, she was actually relieved the romance was over. On paper, Timothy had been “the perfect catch.” He was attractive in a not-over-the-top way, had a solid career path, and was focused on moving toward the kind of “having it all” that included a home, marriage, and children. It all sounded perfect, and Mary’s friends and family were thrilled that she’d found someone so stable and secure.

Initially, the courtship had gone well, and Mary fostered hopes of truly falling in love with Timothy, but it never happened. At first she couldn’t put her finger on what was wrong, but the little voice in her head that warned her not to get too attached would not be silenced. Eventually, the truth started to emerge. Timothy was more focused on the picture of having it all than on the actual people in that picture.

When aspects of Mary’s personality or behavior deviated from his master plan, Timothy became aloof and dismissive. His condescension was subtle, but it could also be quite cutting, and for a time, Mary took his condemnations to heart. Perhaps something was wrong with her? Mary sometimes wondered if maybe she should try harder to do and see things from Timothy’s perspective, but she never got the opportunity. After six months, Timothy announced he was breaking things off to get back together with his former girlfriend. After the initial shock and anger wore off, Mary admitted to herself–and to me–that she felt as if she’d truly dodged a bullet.

What the Cards Revealed

During our conversation, I had been shuffling the cards and focusing on Mary’s narrative. I asked her to randomly draw a card. The Five of Cups offered a fairly precise overview into Mary’s situation. In it, a lone figure contemplates three cups overturned before him on the ground. These cups signify the loss of a love or a romance that has fallen well beneath expectations. The major question I can’t help but take away from the scene–who was responsible for making the mess in the first place? Was it the person standing there, now pondering the aftermath, or had the culprit done the damage and fled the scene?

Whichever the case, the Five of Cups is not a card without hope, for behind the sad lover, just out of sight, two remaining cups still offer the possibility to start anew. But as simple as it might appear to just turn around, pick up the pieces, and head off in search of the next affair, unless it was revealed who had upset the first three cups and how it happened, the figure (in this case representative of Mary) was running the risk of repeating the cycle of failure again.

I asked Mary to focus on the romantic continuum of her life, and to concentrate on the pattern in her former relationships created as a whole. To me, the Four of Cups told an interesting tale. A young man sits on the green grass beneath a tree. The sky is clear and the day is pleasant. As with the previous card, three cups–these full rather than spilled out–sit before him, and yet there is space for another to complete the row. Like a phantom, a small cloud has appeared out of the blue, from which a hand extends, offering a final cup to fill out the scene. Again, the “easy” choice would be to take what’s offered, but who is to say the magic cup proffered won’t disappear as quickly as it’s appeared? And what of the cup’s contents? Not knowing its true origin, might it not be possible that the liquid it holds is bitter…or even poisoned?

What this suggested to me was that Mary did not have full confidence in her own self-worth. She was waiting for someone to “fill in the blanks” to make her a whole person, rather than completing herself in a way that would make her the kind of partner that brought equal value to a relationship.

Finally, I asked Mary to concentrate on what force she needed to bring into her life in order to effect the most positive changes for her romantic future. Mary selected the Queen of Wands. At first blush, this might not appear the most promising of choices. The Queen of Wands is seated on in a landscape divided by a desolate gray field on one side, and a stark desert on the other. Her throne, though intricately carved and royally decorated, is made of stone, and does not look the least bit comfortable. And yet, this queen’s gaze is steady and forthright, looking toward the future with purpose. The black cat at her feet speaks to a special kind of magic, while the sunflower in her hand symbolizes a unique power for feminine creativity.

Mary was on the threshold of a very exciting new phase in her life. “If you’ve always been someone who thinks outside the box,” I told her, “now is the time to trust your instincts, and concentrate on being your best self.” Mary was in a position to create the perfect atmosphere to attract the kind of love she was yearning for. “Don’t worry about ‘what looks good on paper,’ or wait for someone to fill in the blanks,” I said, and explained that she had to get herself together and learn to be comfortable in her own skin. “Find yourself, be yourself, and love yourself,” I said, “and there’s every chance that the love you’ve been searching for is going to find you.”

When Mary left, she felt invigorated and hopeful. If she followed the marching orders the cards had revealed, I had every confidence that her next romance would be one that she could both sustain, and be sustained by.

If you consistently get your signals crossed when attempting to find a satisfying romance, why not let a KEEN tarot advisor help you make a better love connection?