The Eight of Wands Tarot Card 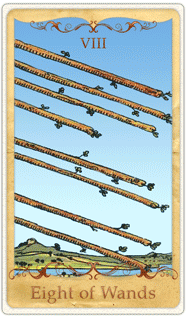 Do things seem to be speeding up in your life? Is there a sense of urgency to the daily proceedings? Are you headed toward a long-sought conclusion? Is a settlement about to appear in a long-running dispute? Have you gotten closer to your goal in the past week than in the past year? Are the flirtations of a friend or co-worker suddenly more inviting? The Eight of Wands is the card the Tarot delivers when your excitement over a positive turn of events is compressing time and making every moment heightened with anticipation.

While some versions of this card may have a miniscule landscape across the bottom, the majority of them simply have an unimpeded sky blue background with eight wooden walking sticks, or wands, splayed about the card. This is the rare Tarot card with no people in it. There is no hint at anyone being there.

Were the wands tossed? Are they being dropped? Or are they flying on a breeze? The lack of a person in a card is rare, but the lack of even the presence of someone is an even more rare Tarot illustration. The only person associated with these wands is, in fact, you, the viewer of the card. Wands are the Tarot deck’s symbol of creativity and you are looking at many creative possibilities all falling into place, just as you would like. This is a powerful omen; use it to advance your standing in the world.

Every Tarot reading involves the placement of some Tarot cards into specific positions that make up a complete pattern. These positions represent your past, your present and your future. Where one card lands establishes a meaning that would often be quite different were it to have landed in another position. Some cards in the deck are far more powerful in one of these positions than in others.

When the Eight of Wands is in the past position in your reading, you might be able to look back on a time when everything almost magically landed in the right position for you to take advantage of great opportunities. If this was the case, your reading wants you to take stock of how well you managed to do with the chances you were given. If you are in a good space and are getting this reading during a calm time in your life, the Eight of Wands in the past position indicates that when the universe worked in your favor a few months or years ago, you ran with it. You got ahead and made the most of the access you were granted, the favors that were bestowed and the contacts that networking delivered. If the purpose of your Tarot reading is because things are not going so well right now, the Eight of Wands in this position lets you know that you may have not made the most of the opportunities in your recent past.

The Eight of Wands in the present position is an exciting place. Look around – this is a golden opportunity of a time for you. Things are going your way. Sometimes we are so used to plodding through oppositions and setbacks that making strides and fulfilling goals creates an anxiety because the familiarity of failure is replaced by a strange success. Are you getting a Tarot reading because everything going right in your life is producing a weird feeling?

In the future position in your reading, the Eight of Wands is a harbinger of opportunity. The Tarot wants to assure you that big things are coming and that a vision you have for the way things should be might actually start to occur. Stay upbeat and look for signs that things are turning your way. When you see this action happening, put positive energy out there and let it return the amplified rewards of the universe to you.

Every Tarot reading is a grouping of cards that have individual meaning. Yet the reading combines these meanings to give you the message of the Tarot.

When the Eight of Wands is in a reading with either the Strength card (#8) or The Moon card (#18), your reading is especially powerful as this Wands card is the lower echo of these two. When either appears in your reading, it emphasizes the need to follow your hunches on the appearance of chance opportunities.

When another card with the number eight in it appears in a reading with this card, the Tarot indicates that you are winding things up in a dramatic fashion. When the Eight of Cups is present with this card in your reading, your love life is ending one cycle and beginning another. It may not be easy, but the big change is predestined and will culminate soon. An affair could be over. An engagement could become a marriage.

When the Eight of Pentacles is in a reading with the Eight of Wands, you are absolutely on the right path and the only thing holding you back from success could be the people in your life who will not leave you alone to follow your own hunches. The Eight of Swords coupling with this card means you are your own worst enemy when it comes to being held back from taking charge of your own destiny. Quit blaming others and unleash your inner strength.

When The Wheel of Fortune is in a reading with the Eight of Wands, the chance that you might lose a recent victory becomes a distinct possibility. Are you willing to stand up and fight for what is rightfully yours?

If your reading with the Eight of Wands card also features The Chariot card, you will be excited to find that a dream is coming true. You may have fantasized about a specific person as your possible soulmate and suddenly will discover that you were on a pedestal in his or her eyes as well.

In conclusion, the Tarot sends you the Eight of Wands when it is time to let the universe toss your creative abilities into the air and follow them to wherever they might land, making the most out of the energy they gather from the flight.

Keen Editorial Staff
Keen's Editorial Staff is made up of world-class writers, astrologers, psychics, and advisors with diverse experience and spiritual sensitivity.
The Queen of Swords Tarot Card
The Devil Tarot Card