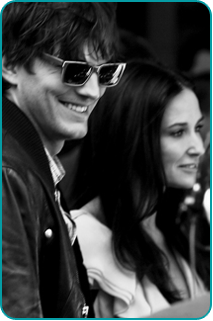 Celebrity couples can give us a great chance to look at compatibility among zodiac signs using advanced astrology, based on the use of the house system. As you may know, your zodiac sign is also called your sun sign, which is determined by the location of the sun in the zodiac when you are born. In the house system, your sun is in your first house. Determining your relationship with people is easy when you know their sun sign, as you can place them in the house that corresponds to your sun sign. The sign after yours is in your second house and so on until the sign before yours, is found in your 12th house. For example, if you are a Taurus and you’re looking for someone who lines up with your 7th house, the House of Partnerships, you would be looking for a Scorpio.

Let’s look at some celebrity couples and what their zodiac sign match-ups tell us about their relationships. Afterwards, check out what the planet Uranus forecasts for each celebrity couple.

Angelina’s sun sign is six signs away from Brad’s sun sign, which puts it in his 7th house. This is the astrological house of partnership – is there any doubt that these two were fated to garner attention as a couple beyond their individual celebrity? Brad is fascinated with Angelina’s magnetic pull on him while she sees him as the perfect balance to keep her in line with the real world. Her carefree nonconformity fell beholden to his spell and their fated partnership was born, making headlines and enriching paparazzi everywhere they went.

This is another couple with the same irregular match-up of sun signs. Chris Martin’s sun is in the Libra 6th house, making the otherwise flaky and self-involved Gwyneth a devoted wife to him. Her sun in his 8th house is a window to a world he never imagined and in encountering values and outlooks radically different than his own, she has inspired him to become a more multi-dimensional person.

The president and first lady have this 6th house/8th house combination as well. His Leo sun is in her 8th House of Other’s Values, and she has admitted in interviews that seeing him in action as a community organizer working on behalf of the inner city poor of Chicago was what drew her most to him after a series of unimpressive dates. Meanwhile, her Capricorn Sun in his 6th House of Duty reminds him that there is a human side to life beyond leadership and administration. The strength of their relationship is a mutual respect for what the other brings to the table.

Another example of this same planetary combination is reality star Kim Kardashian’s relationship with Reggie Bush. He is an American football star whose sun is in her 6th house. You thought she would never settle down, but the physique and talent of Reggie has tamed her. Meanwhile, her outrageous physical charms and upbringing in a wealthy environment deliver a different set of values than Reggie knew as a child, but can now enjoy as one aspect of the status he has earned.

Our final couple with the 6th house/8th house alignment is one of the quirkier celebrity combos out there. When news broke of them funding a school to assist quake-damaged Haiti, serious students of astrology were not surprised. Keith’s Scorpio sun is in Nicole’s 6th House of Duty and she works with him to make sure that their status as stars helps others. He on the other hand, with her sun in his 8th House of Other’s Values, has enjoyed having his consciousness expanded by a partner who comes from a completely different background than him.

The sign that comes after yours is in the 2nd house. This is the House of Money. The financial security that Will Smith’s Libra sun brings to their marriage is what allows Jada Pinkett Smith to feel comfortable enough that she can take career risks she would otherwise avoid with her conservative Virgo nature. When a partner’s sign comes right before yours, his or her sun is in your 12th house – the House of the Unconscious. This is a partner who inspires you to tap into unconscious possibilities into which you might never have delved. Will Smith has grown as an actor and part of it is due to the inspiration that Jada has provided.

Here we have another example of happiness among signs that follow each other. Posh Spice is a freedom-loving Aries who is more relaxed and loving with the financial security of a man whose sun is in her second house. Meanwhile, he is inspired by her to venture into the unconventional, taking a huge chance in his career by leaving Europe for Los Angeles, where he signed to join the L.A. Galaxy in 2007. When your partner’s sun is in the sign before yours, the inspiration is always there for the wildest idea.

When someone’s sun sign is two zodiac signs after yours, their sun is in your 3rd house and your sun is therefore in this person’s 11th house. Jim Carrey’s Capricorn sun is in Jenny McCarthy’s 3rd house, the House of Communication. As a partner, Jim articulates what Jenny has traditionally only been able to feel and express non-verbally. Meanwhile, her sun is in his House of Popularity. With her own tumultuous existence in the spotlight, Jenny has relaxed Jim’s relationship with his celebrity status. This has the makings of the most successful relationship for either of these stars.

Tension must be worked out in relationships that feature sun signs that are three zodiac signs removed from each other. Beyoncé’s Virgo sun is in Jay Z’s 10th house, the House of Careers. It is fortunate that they are each famous in their own right, as the tension of one partner having a bigger or better career than the other can easily flare up and ruin a relationship. Jay-Z’s Sagittarius sun is in Beyoncé’s 4th, the House of Identity. This is the house of your self-image and there is natural tension between who you are and with what you identify. If someone’s sun is in your 4th house, this person is usually closer to actually being what you want to be than you are. Tension develops when this person senses your weakness. Let’s just say that if Beyoncé had met Jay-Z before either of them became successful, she might not have given him the time of day, as she sees success as validation of her man’s greatness.

This is another example of a 10th house/4th house conundrum. Demi’s Scorpio sun is three signs before Ashton’s sun sign of Aquarius. Her sun in his career house assures us all that his celebrity has more to do with being with her than either of them might want to admit. Meanwhile, her identity-driven 4th house benefits from having the sun sign of her younger man in it. Demi revitalized her public image when she became the inspiration for a generation of women who realized they were still attractive to seduce a cute young stud like Demi had. This is one case where the 10th house/4th house tension paid off well.

When you and a partner share a sun sign, your sun is in his or her 1st house and vice versa. This can be a blessing or a curse, and a lot more depends on your attitude than fate. As the 1st house is the House of Self, people of the same sign can get along well as they understand each other intuitively, with little discussion. Matthew and Sarah Jessica were both teen stars and therefore saw each other as peers by the time they got into a serious relationship. This type of partnership works best when the roles and household power are equitable.

The 5th house is the House of Romance. Faith Hill’s sun is in Tim McGraw’s House of Romance – she is his muse. All of the pressure of being a huge celebrity melts when she takes the time to inspire him yet again. Correspondingly, her sun is in his 9th house, the House of Philosophy. This is the astrological location of consciousness expansion. You can bet that Faith’s world was forever altered when she met Tim; she may have been his muse, but he stands as her masterpiece. What she inspires in him, he uses to transform her world with the results.