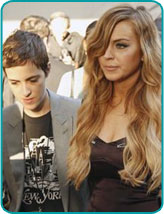 She might have started off as one of the biggest star of a generation of actresses born in the 1980s, but Lindsay Lohan’s career has become the epitome of the self-induced disaster. Born into a well-to-do family who supported her modeling and acting career at an early age, Lohan went from portraying a precocious child in a television soap opera to being the face of pre-teen America in her hit movie The Parent Trap, followed by the blockbuster success of the film Freaky Friday. No sooner had she become a household name than she started a pattern of attention-seeking through negative behavior. This got her a lot of attention and all of it was negative. Alcohol and apparent drug abuse have been central to her dysfunctional behavior that often finds its pathetic apogee in the spotlight.

Lindsay Lohan was born July 2, 1986 in New York. There has been no documentation of her birth time, but we do know that her Moon is in the latter half of Taurus and the Sun was in Cancer that day. Cancer is the astrological sign of sentimental behavior. Taurus is the zodiac sign of material wealth and earthly delights. Lindsay needs the certainty of accomplishments and rewards to feel secure in this world. She is driven by a primal savvy in attaining what she wants.

Drugs and Alcohol Take Over

The planetary pattern that is most apparent in Lindsay’s birth horoscope is the opposition of her Cancer Sun to Neptune. Neptune is the planet that rules dugs and alcohol. Oppositions to this planet in a birth chart indicate struggles with fighting reality and embracing illusion. The Crab zodiac sign is representative of a person who seeks security above all else. The karmic challenge of Lindsay Lohan’s life will be to feel secure without isolating herself in an illusion, be it an alcoholic buzz or a drug-induced party lifestyle.

Lindsay also has some tension in her astrological birth chart from the planet Uranus. It is in a tense “square” angle to Jupiter. The planet Uranus rules sudden shocks and surprises, while Jupiter is the planet of spectacle, exaggeration and expansion. Every time Lindsay’s name appears in the news, we ask the question “What has she done now?” and the answer always begins with “You won’t believe this, but…” and a previous episode in self-destruction is topped by a new, seemingly unbelievable tale.

While she long crossed over from being an actress to being a celebrity, Lohan unwittingly became one of the world’s most well-known Celesbians when she made public her relationship with club-hopping party girl Samantha Ronson. Ten years her senior but none the wiser, Ronson’s public affair with Lindsay was another hallmark of this Jupiter-influenced wild side, but is Lindsay actually a lesbian? Her chart reveals planetary patterns (the planet Venus is retrograde in her birth chart) that indicate a fluid sexuality, a comfort with loving the person she is most attracted to rather than a specific gender or a fetish “type” of person.

In April 2009, rumors were abuzz that Lohan and Ronson had split up. In her birth chart, Lindsay has Pluto, the planet of transformation, in Scorpio, the zodiac sign of loyalty. Pluto was in Scorpio from 1984 thru 1995. Everyone born then has some conflict between seeing change as a way of giving up one’s true inner authenticity. This far off planet recently moved into Capricorn and is beginning a major interaction with critical points in Lindsay’s birth chart. The dramatic split with Ronson should come as no shock to anyone who knows the power of Pluto as it moves through the solar system. Pluto is about to cross the horoscope point of Lindsay’s birth chart Neptune. When this happens, a true transformation toward substance abuse will begin. But this is just the first step. Pluto is also moving into an opposition with Lindsay’s Cancer Sun. An opposition from Pluto to one’s Sun is one of the toughest things to endure in all of astrology.

Over the next year, Pluto will get together with Lindsay’s Neptune. This will be the biggest wake up call yet that Lindsay’s relationship with drugs and alcohol must change. Despite an arrest for drunk diving and numerous eyewitness allegations of severe partying, Lindsay still seeks the security that removing one’s consciousness from reality brings. However, Neptune also rules the arts, religion and meditation. These are all exercises in offering up different versions of reality or expanding on the reality we all commonly accept. The rest of this year and early into 2010 offer Lindsay the best opportunity to join a church or follow a spiritual path. Pluto leads all transformations and the less resistance to the inevitable pull of the universe, the better off a person will become. The trouble for Lindsay is the likelihood that she will be instead making the choice to party ever harder and embrace scandals of greater magnitude than before.

If Lindsay Lohan immediately embraces a new belief system that brings her security through realities beyond that which we experience in ordinary life, she will soon return to the heights of creative leadership of her generation on the screen and in the media. Can she abandon a hard-partying lifestyle and master the craft of acting? Will she find a spiritual peace that comes with adopting a new belief system? Astrology only enforces the patterns that we create through our choices. If she follows the patterns of excessive abandonment of reality in the form of drug and alcohol abuse, the planetary alignments indicate that the fate of Janis Joplin, Jimi Hendrix, Jean-Michel Basquiat and Kurt Cobain await her: death from excess by age 27. The choices are all hers, the patterns are all in the stars and the consequences remain forever in the hands of fate.

Keen Editorial Staff
Keen's Editorial Staff is made up of world-class writers, astrologers, psychics, and advisors with diverse experience and spiritual sensitivity.
Jupiter Gets Tense with Pluto: How Secrets Transform You
Mercury Retrograde in Libra