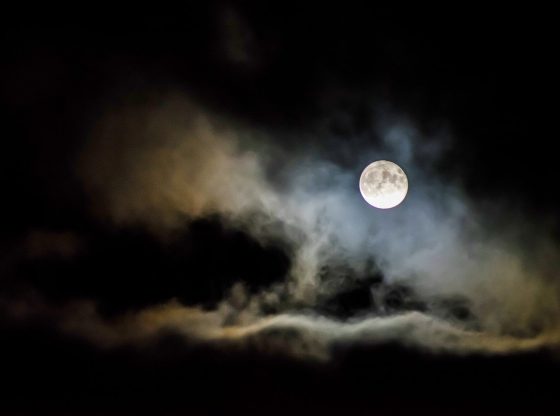 This article is Part 2 of Draven Grey’s written series “What to Expect Astrologically for the rest of 2018,” which outlines all you need to know about major astrological events, positions, and movements coming up from September 2018 through the end of the fall. Click here to check out the rest of the series!

As is the rule, wherever the Sun is in the Zodiac, that is where the Moon will be new (dark). The full moon will always be in the opposite sign of the Sun’s placement in the respective Zodiac sign. During The Sun in Libra, the New Moon will be in Libra and the Full Moon will be in Aries, as Aries is its opposite of Libra on the Astrological Wheel. Both of these energies are in fair contrast to each other, as they are part of the balance of the Zodiac in their most virtuous dualities, which will be explained, below.

In the Tarot, the Moon represents the nature of deepened emotions and also shows a clear passage through that which is unenlightened, in order to bring light to any given situation, on the other side of it. This also corresponds to the nature of manifestation which is best brought forward during the New Moon, giving way to the fruition of the manifestation during the course of the Full Moon.

On September 24th. 2018 at 7:03 PM EST, the Full Moon will be in Aries, which is a wonderful time, while in Libra, to bring the fullest realizations of manifestation forward from what we have  brought to the table from the end of the summer. For many people that have the Moon in Aries, there is a capacity for a higher understanding of the occult, divination, mysticism, and other such subjects. This is also an especially creative energy for musicians, artists, and performers. For others, especially those that have their Sun Sign in an Earth Sign, this can create fortitude for business, as the Moon in Aries can create a stance for an individual to become a natural born leader and provides an understanding for being able to see that which is difficult to be sign by others, especially in terms of financial forecasting, business hurdles, and even challenges that may arise with employees, CEOs, and other mechanisms of business. This provides a stance for overcome such hurdles by careful planning and quick maneuvering.

The Moon in Aries can be quite vibrant, exhilaratingly brash, and evenly moody. As a Gemini whose Moon sign is in Aries, I am very much aware of the pull of energy that is able to exist with this all too often incompatible duo astrologically. This has a fiery burst of fortitude that is put out by obstacles, struggles, but also by creating difficult transformations that, if defied, only stand to create disharmony, especially during the New Moon in Aries. But with the Full Moon in Aries, this creates a powerful position in the Zodiac for people born with an Aries Moon, that ignites creativity, fortitude, and an uncanny ability to see the creation that exists just beyond the barriers of destruction.

For argument’s sake, in this example, we will use the Moon card, in Tarot, as being representative of the Moon in the our sky. The generally accepted standard of this is for the Moon card to represent Pisces, but this is part of a bigger body of work that I will be putting out, which will explain this as a fallacy. That doesn’t mean that one is more correct over the other, but the Moon card is associated with the elements of the subconscious mind, which is very indicative of the energies of the Moon and its symbolism throughout history. In the “Thoth” deck, the Moon is described as “the passage of darkness that must be traveled through, in order to see the light.”

The Emperor card represents Aries, which represents conquest, strife, and ultimate victory. This is where the path for someone with the Moon in Aries follows this flow of energy through their emotions, as described by the Emperor card.  In taking the meanings of the Moon card, especially with the implications of a difficult time ahead that is most necessary (“the passage of darkness that must be traveled through”) for creating strength and fortitude (“in order to see the light”) and looking at the nature of conquest, strife, and victory all wrapped up into one card, the Moon  card would represent the strife. This is where creativity and ambition don’t always meet eye to eye, and about half the time, ambition will be greater than the creativity involved and the other half would be a world’s worth of creativity with no ambition to carry it out. This is where it is easy to see the nature of balance that exists in the Universe, even if the balance isn’t always in an evenly distributed way. The nature of the Full Moon in Aries will provide an energy that is able to come across as aggressive.

Aries Sun Signs will have a much better position of forwardness during this period, as this is able to help to create a greater initiative from the subconscious, which will dictate the Aries emotions,  thus creating fortitude of their actions. Sun in Libra individuals, however, will find things to be far more difficult, because of the uneven balance that is able to be felt, but as things start to move away from this position, Libras will begin to strengthen their resolve for seeing, much more clearly, the balance that is able to bring their more virtuous stances. Taking precautions, and being consciously aware of this energy, though, can certainly help to hone in on the difficulties that are able to be created by this, but not dwelling on this as a negative stance is also something that should be taken into consideration.

For everyone, the Moon in Aries is able to create energy that feeds into restlessness, but finding ways to relax while still being active, will be helpful during this time period. For work, it is easy to  see creative positions jumping from one idea to another, where it can be more challenging to focus. When dealing with everyone from friends to family, from spouses to coworkers, tempers can swell and explode quickly, because of impetuous actions that can seem to offend, even if no offense was meant. Taking the time to be mindful for how to care about how one’s actions will affect someone else, will be very important for the ways that this will come forward to a more positive stance.

On October 7th at 9:10 PM EST, the New Moon will be in Libra, which is determined in the Tarot by the two of swords. In the Minor Arcana, this is the closest position that is shown, pictorially, to Justice. It typically depicts the position of a woman with her back to the crescent moon and the ocean, with two swords crossed in front of her, while being blindfolded. Not only does this represent the blindness of justice, but it also shows the disposition of peace and tranquility that is able to be emanated from within.

Be cautious, during this time, not to allow intellect to be suppressed due to positions of love. Both can find balance, and often times, love is able to create positions for us that allow us to think with our hearts as opposed to our minds, creating regret. This is the challenge that is able to come forward from the Moon in Libra, but when we allow ourselves to feel a stance that creates positions of openness for both sides of the scales, it is much easier to see these positions in a clearer capacity.

The New Moon in Libra is a great time for pondering the positions that have been able to occur during the Sun in Libra, and far too often, this holds true, because of some of the eventual positions that are able to be forthcoming. When this introspection is gained, especially in terms of what we see occurring on a societal scale, we are able to gain insights as to where true justice is able to emerge from. Understanding the ways that we can move forward, without holding anything under will, can create a greater stance for how we are able to feel love more vibrantly and understand the plights of others, especially in terms of how we can impact the world through something as simple as a vote at the polls.

For people with the Sun in Aries, this will be able to create a more subdued energy. Water signs will be able to find more balance, thus creating a position for being able to contend with the impending holiday season. This can create a stance for looking forward to what the end of the year will bring, but it is also able to develop a stance for communicating emotions that may come across, to others, as difficult.

Keen Editorial Staff
Keen's Editorial Staff is made up of world-class writers, astrologers, psychics, and advisors with diverse experience and spiritual sensitivity.
The Empowerment Column: About Those Storms
Expect the Unexpected with Uranus in Aries