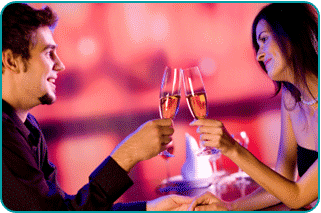 The final holiday of the season is also the first holiday of the new year. New Year’s Eve of 2009 going into 2010 is on a Thursday night, making New Year’s Day the start of a weekend. And so the extended celebration of Thursday the 31st through Sunday, January 3rd makes for a big party to ring out the old and bring in the new.

The location of the planets over the new year festivities will have an influence on you depending on your zodiac birth sign. Some signs will be partying hard and others taking it a little easier. Let’s examine where some key heavenly bodies will be this weekend and how that affects you & potentially your plans:

The planet of communication is retrograde in Capricorn during the entire new year launch. For Taurus and Virgo individuals, this makes for a quirky few days of seeing old friends and lovers in places you’d least expect them. Aries, Cancer and Libra will likely have travel delays, arguments over changing plans and other sorts of interruptions to their festivities; expect some misunderstandings. Those born under Capricorn itself are advised to avoid hosting any grand events over the four-day weekend and just be the casual party guest who shows up to be part of the fun.

The planet of love is also in Capricorn, but unlike Mercury it is not moving in retrograde. This means that we will all have a reliable friendship or love relationship if we seek it over the forecast period. The long new year weekend should be a time of celebrating with a familiar person. This time it is a blessed time for all zodiac signs in love.

The full moon arrives in the early afternoon (in North America) on New Year’s Eve. This full moon is in the zodiac sign of Cancer, the sign ruled by the Moon. This sees the peak of your fun and plans arriving on New Year’s Eve. Scorpio and Pisces especially benefit from this lunar position, receiving the kiss that they truly want at the appointed time. Cancer and Capricorn are locked in a tug of war over feeling obligated to attend certain events and knowing where the action really is, hoping to cut out early and get there. Libra and Aries are left knowing that something fun is going on and wondering where it is. The Moon moves into Leo on the evening of January 1st and makes for a fun weekend, especially if you attend an event hosted by a Sagittarius, Aries or Leo.

The planet of action is in Leo, the zodiac sign of drama. The little red planet has been there a while and it is making us all feel comfortable on the path we have chosen. This makes for an enjoyable, perhaps almost predictable time out as you are adapting to circumstances and surroundings no matter what your zodiac sign is. When Mars turns retrograde early in the year, though, look for some chaos to develop. Enjoy your four day weekend and all the friends you see, they may be moving on to different things in life (as will you) sooner than any of you realize.

Read your sign below to know your best options on New Year’s Eve, New Year’s Day and the first long weekend of the year:

New Year’s Eve: A small party near home should suffice.
New Year’s Day: Listening to your favorite music will pass the holiday time well.
New Year’s Weekend: This is the time to get out in the crowd.

New Year’s Eve: Everyone will have been talking about the party you should attend for weeks ahead of time.
New Year’s Day: Stay home and recuperate.
New Year’s Weekend: A little networking goes a long way, career-wise.

New Year’s Eve: Spend a little extra and go somewhere nice.
New Year’s Day: Get to know your neighbors.
New Year’s Weekend: A delayed getaway will let you ring in the new year with a relaxing mini-vacation.

New Year’s Eve: Don’t let others tell you how you want to celebrate.
New Year’s Day: Start the year off with something luxurious.
New Year’s Weekend: Your special someone deserves some intimate attention.

New Year’s Eve: Give the keys to someone else and live it up.
New Year’s Day: Have some pre-made meals ready for your all-day recovery.
New Year’s Weekend: Let your partner lead the way on this one.

New Year’s Eve: Join the biggest crowd in town.
New Year’s Day: If you waited this long, cut loose with an indulgence tonight.
New Year’s Weekend: Stuck preparing to go back to work or school.

New Year’s Eve: All eyes are on you so feel free to shine.
New Year’s Day: Too many friends in too many places, you social butterfly.
New Year’s Weekend: Enjoy some movies, museums or concerts.

New Year’s Eve: Get out of town and start the New Year some place … well, new.
New Year’s Day: You might have to work or be around people who will help your career. Be nice.
New Year’s Weekend: Sit around the house or hotel and recuperate.

New Year’s Eve: Ask your passion partner what to do.
New Year’s Day: Take a drive to the end of the highway.
New Year’s Weekend: The neighborhood should have a groovy potluck if you ask around.

New Year’s Eve: Someone with whom you are falling in love will lead the way.
New Year’s Day: Someone offers you free tickets for an A-list event. Enjoy!
New Year’s Weekend: You will be spending what is left of your holiday cash on something special.

New Year’s Eve: Your commitments might prevent you from going to the best party, but try to make the most as you did give your word.
New Year’s Day: Again, you are seemingly stuck doing something other than what you want to be doing, but at least this time the food is better.
New Year’s Weekend: Finally a few days where it is all about you.

New Year’s Eve: Dive into the revelry like never before.
New Year’s Day: Cleanup may squelch extending the celebration.
New Year’s Weekend: A significant other has plans!