The Mars Manhunt: Mars in Retrograde 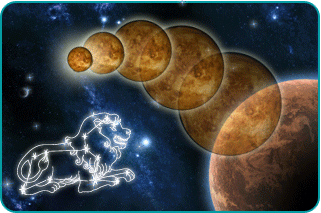 The planet Mars rules masculinity. It is the planet of action and of war. Violent incidences can often be traced back to Mars activity in the heavens. But the building of civilization, the striving to lead all people to freedom, the urge to better humanity with progress … all of these positive activities begin with an impulse from the planet Mars.

Mars circles the earth over the course of just more than two earth years. There are times when it appears to slow down and move backward across the sky. This illusion is based on the speed and position of the earth. Because we are so much closer to the sun, we make it around the sun while Mars appears to be lingering. We call this apparent backward motion “retrograde.” And while it may be an optical illusion, the effect that retrograde Mars has is very real on men, aggression and the urge to move on.

Mars entered the zodiac sign of Leo on October 16. It is at a standstill relative to earth’s motion for most of December, turning retrograde on December 19. It will be appearing to move backward across the sky until March 10. At this time, it will be right where it was in the middle of October: at the beginning of zodiac Leo. As it ends its retrograde and appears to move forward, it will finally leave Leo and enter Virgo on June 7.

What does this mean for you? If you recently ended a relationship, there may be some wondering about what he is doing, where he is and how he feels about what happened. Most of all, there is the lingering replaying of events over and over in your head, wondering what could have been done different and speculating on whether or not it would work if he were to return to try it all over again. When the planet of masculinity turns retrograde, men tend to ruminate more on the past. They go over their actions mentally, as well as emotionally. They may even make the effort to recreate a past relationship physically. It is safe to say that if he is going to come back to you, or at least attempt to reignite the old flame, it will be while Mars is retrograde.

The best way to prepare for an encounter with him is to know what he is going through. Every man will respond to Mars retrograde in Leo differently depending on his zodiac sign. Read below for the sign of the man you lost to see if there is any chance that he is thinking about you and feeling like maybe coming back.

The Ram is feeling more romantic than ever. Why couldn’t he have been this way when you two were together? He will be wistful for what once was but his memory is an idealization and he may not cope well with a return to reality.

When the Bull ends it, he ends it. The chances that he is suddenly pining for you are slim, but Mars retrograde has a way of beating the odds. If he relocated, he is likely quite lonely and may even be homesick for what you two had.

No matter what he says and what the gossip is, if you are hearing stories about him or seeing him in random encounters, he wants you back, and badly. But he does not want you back as it once was. Pry a little and see how he has re-imagined you.

If that cute Crab from your past crawls back into your life, find out his financial situation before getting caught in his clutches. He may want you back because of access you have to a job or money. But he may be better off now and wanting to try again with more security for you both.

With Mars retrograde in his sign, your Lion ex is re-evaluating his life, and probably doing so with less drama than ever before. The rare presence of true humility could be making him thoughtful and considerate enough for you two to try, try again.

If your Virgo ex comes calling while Mars is retrograde in Leo, make sure that he has not been drinking or otherwise altering his mood. He will be in an escapist mode and could be using you to help him avoid dealing with his present situation.

Your Libra ex is growing more obsessed with his social standing than ever before. Should he appear at your door consider that he may be more interested in the party invites that you have been receiving than in any deep love you two could rekindle.

Your Scorpion ex is obsessed with the path he is on and is starting to have regrets for moves he made that took him away from where he thinks he should be. If he is coming back to you it is to retrace his steps and get on the right path. Once again, it is all about him.

As Mars appears to move backward across the heavens, the Sagittarian man pines for adventure. The boredom of his everyday existence will make him fantasize about running away, and the ideal partner is someone he already knows. Make sure your fantasy matches before entwining yourself too deeply in his.

He will be the paragon of class and may even help you out of a jam early in the new year in order to reintroduce himself to you. But as he gets a little deeper into your life, you may surmise that he is most interested in getting into your pants. Make sure it is you he is after and not just your physical presence.

Your water bearing ex will definitely be influenced by Mars to obsess about you and what might have been between you two. The problem in this is that he may begin playing the martyr in order to manipulate this whole drama into yet another way to assert control over things. Are you back to square one yet?

Mars in Leo is causing your Pisces ex to go back over things in his life as a means of changing the way he operates. While you can be happy that he is making big strides, don’t get too close until evidence of real change has taken hold.

Keen Editorial Staff
Keen's Editorial Staff is made up of world-class writers, astrologers, psychics, and advisors with diverse experience and spiritual sensitivity.
Surviving Mercury in Retrograde
The Mars Manhunt: Mars in Virgo