The Quality of Your Zodiac Element 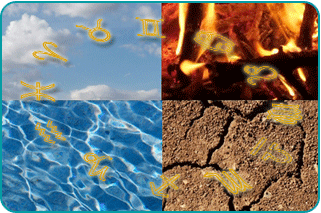 Every zodiac sign has an element attached to it. Your sign is one of these: Fire, Earth, Air or Water. But the quality of that element changes as the signs change. There are three qualities in the zodiac: Cardinal, Fixed and Mutable. Only one of them applies to your sign’s element and this combination is the essence of your zodiac sign, giving a great personality description about the fundamentals at the core of your being.

Each sign of the zodiac has a unique combination of one quality and one element – no two signs carry the same two of these together. Read below to see what your sign promises to deliver at the core of your personality on the drive toward understanding yourself.

This Cardinal Fire sign is known as “The Spark” – it uses the Cardinal quality of starting new things and the Fire element of spreading energy quite fast. This might be perceived as an avoidant personality, always off to new things.

This Fixed Earth Sign is known as “The Stone” – it relies on the Fixed quality of stability and the Earth element’s natural pragmatism to stay consistent. Some might even call this stubborn.

This Mutable Air sign is known as “The Cool Breeze” – it embodies the Mutable quality inherent in a refreshing shift of consciousness. This burst of insight is the core nature of the Air element. Some might consider this a personality that is a lot of flash and no substance.

This Cardinal Water sign is known as “The Rain” – it manifests the Cardinal quality’s invigorating nature with the nurturing possibilities inherent in Water signs. Others could consider the drenching of an otherwise good day to be more like it.

This Fixed Fire sign is known as “The Bonfire” – the Fixed quality’s stationary nature enlightens all those that gather around the warmth of its Fire element. A difference of opinion with a Leo could lead one to believe that the lion never wants to leave its throne.

This Mutable Earth sign is often referred to as “The Landslide” – the Mutable quality’s nature of change and motion make a real impact in the Earth element’s material world. Another viewpoint could see this as a capitulation to the elements.

This Cardinal Air sign is best described as “Exhaling” – the Cardinal quality of putting new energy out into the world combines with the Air element’s nature of shared consciousness. Others might insist that it is all talk and no action.

This Fixed Water sign can only be thought of as “Ice” – The Fixed quality of a certain position is manifested by the solid nature of the Water element. Others will, of course, point out that this very consistency can be … oh, so cold.

This Mutable Fire sign is understandably referred to as “The Wildfire” – the Mutable quality of raging unhindered energy manifests in the Fire element as a sudden engulfing sensation. Others might note that the unbridled energy of the wildfire burns itself out.

This Cardinal Earth sign is commonly called “The Meteor” – the Cardinal nature of flying independently into new worlds manifested in the Earth element’s solid, absolute nature. It could be pointed out that many look at a meteor and say, “You’re not from around here, are you?”…

This Fixed Air sign is referred to as “The Deep Breath” – The Fixed quality holds in that which the air element has shared with the people. The Aquarian nature for knowing what the masses want is often derived from being among, but not of them.

This Mutable Water sign is best described as “The Flood” – The Mutable quality manifests as reaching everywhere without regard to convention. The Water element leaves its mark here long after it appears to have receded. Some people might call this behavior mass codependency, but some floods do have a nourishing nature amidst the chaos.

Shared Elements are what attract us to others, but shared qualities have a friction and tension that make animosity a likely outcome. If you are in a relationship with someone whose zodiac sign carries the same quality as yours, you might share some similar attributes that actually upset you. The tension between signs of the same quality is a natural manifestation of seeing what we don’t like about ourselves embodied in someone else.

Keen Editorial Staff
Keen's Editorial Staff is made up of world-class writers, astrologers, psychics, and advisors with diverse experience and spiritual sensitivity.
3 Relationship Pitfalls You Can Prevent
Sun in Taurus: When Love & Luxury Meet