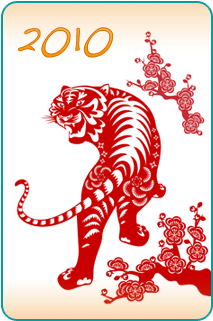 新年快乐! This is the traditional Chinese salutation given on Chinese New Year; it’s pronounced “Kung hei fat choi” and is loosely translated as “Congratulations and be prosperous”. Much like the presidency of the Council of the European Union, where every member state gets a turn on a rotating basis, every Chinese year is represented by a consecutive rotation of animals. Your personality and outlook on life are determined by the animal of the year you were born. As the Year of the Tiger arrives on Valentine’s Day, what does the year ahead mean for you?

2009 and the early part of 2010 were the Year of the Ox. This past year was characterized as slow but dependable. The world economy did not drastically expand or contract. Your love life most likely had an even feeling and tempo. Well, get ready for the feisty Tiger. Look for the world economy to see price spikes in an inflationary cycle, a boom and bust in stock and commodities speculation and the love lives of those around you turned chaotic … as will yours if you are unprepared for the flexibility that the Year of the Tiger demands.

The Tiger energy influences us all to act more independent and territorial, only working well in groups when a clearly defined role is assigned. And most importantly, perhaps above all else for the Tiger, credit for a job well done and the glory due a winning assignment; these are more important than material gain or emotional satisfaction. The Tiger is a gorgeous animal but a fierce killer. The Year of the Tiger brings out an appreciation of beauty and a respect for those who are victorious.

The Year of the Tiger runs from February 14, 2010 through February 2, 2011. Just like every ruling animal sign, the Tiger is a blessing for some Chinese zodiac signs and a curse for others. Read below to see how the coming Year of the Tiger will affect you, remembering that Chinese astrology is great for predicting love, success and family relationships.