Your Job Needs the Chinese Zodiac 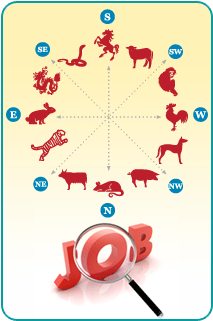 Chinese Astrology has many nuances that make it different than the Western zodiac. For example, Chinese zodiac signs last a full year instead of a month. Theirs is also a much more extensive relationship between your Chinese sign and your ancestors than in the western tradition.

But Chinese Astrology also has the ability to interpret your optimum work environment. Each sign of the Chinese zodiac has more success in certain areas than in others. When you are looking for a job, the city you are in may be a hindrance to getting ahead. If everything is going right, sometimes it is best to attribute that to what type of job you have and where it is located as much or more than your effort.

We are halfway through the year of the Rabbit. The second half of the Rabbit is a great time to make major changes as this docile creature receives little opposition as it makes its way to better pastures. The coming year of the Dragon will be a tremendous transformation for us all and you will want to be positioned well for the most success. Read below for your Chinese animal and make a big change soon to take advantage of opportunities that may be on the way.

Consulting a professional astrologer is easy, and everything in your consultation will be kept private. You may find this person to be a trusted confidante who will do everything in his or her power to get you on the right path for finding happiness in your career and relationships.

Keen Editorial Staff
Keen's Editorial Staff is made up of world-class writers, astrologers, psychics, and advisors with diverse experience and spiritual sensitivity.
Year of the Tiger Forecast
The Three Fates Tarot Spread Offers Insights into the Past, Present and Future