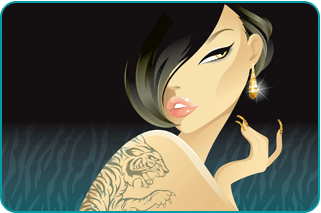 In the Chinese zodiac, a woman born in the Year of the Tiger is independent, solicitous and a born leader. She seeks a partner who equally matches her strong qualities, yet still respects her need for freedom and autonomy. The Tigress likes to be in control, and her sex life requires a mutually stimulating and exciting partner in order to keep her feeling excited and interested. A timid prey is not inviting enough for her to pursue, as she enjoys the challenge of the hunt as much as the spoils of the victory. Since she possesses such magnetic qualities, she is capable of having a good rapport with every sign of the zodiac, but only a few will stand the test of time.

The Chinese zodiac is based on the lunar calendar year, and can begin any time between mid-January to mid-February. A different animal represents each year in the zodiac, twelve animals in all. It is believed that each person born of a certain year takes on the traits and characteristics of the animal representing that year. The Year of the Tiger represents a time of strength, change, passion and independence, and everyone, no matter their sign, can feel the heat, both outside of and in the bedroom.

In Chinese astrology there are five elements or traits. These elements are Water, Earth, Fire, Wood and Metal and are similar to the four elements in western astrology which are Water, Earth, Fire, and Air. Each element represents yet another layer of what goes into creating a unique “you” and the unique personality you possess based on the year in which you were born. While all Tigers possess similarities in personality, the elements further define them, meaning a Metal Tiger may have a slightly different approach to life than a Water Tiger or a Wood Tiger.

Metal Tigers are assertive and competitive; Water Tigers are intuitive and sensitive; Wood Tigers are giving and compassionate; Fire Tigers always look on the bright side and also make great leaders; and Earth Tigers are pensive, focused and diplomatic in their thinking, studying every angle before deciding to pounce. Some of the traits they have in common include personal magnetism and a seductive nature. All Tigers desire a relationship that affords them freedom of thought and action, while also giving them a sense of security. No Tiger is ever happy when being told what to do and when to do it.

Along with animal signs and their elements, there are also trines, sets of three animal signs that show promise of being potential soulmates. For the Tiger, the Horse and the Dog are her best bets for mutually fulfilling partnerships in friendships, romance and even business. To find your personal animal symbol, element and trine or to find out if love is in your future and with whom you’re best suited, seeking the guidance of a trained and gifted psychic and/or astrologer is a good place to start. They can give you insight into the many things that go into your personal makeup, and give you the tools to navigate and negotiate life’s inevitable cycles.

Read on to see how the Tiger Woman matches up in general to the other animals of the Chinese zodiac:

What does the Chinese zodiac tell about your future? Remember, for the most in-depth and accurate information concerning your own personal chart, it’s always best to consult the experts. Have a gifted psychic help you find the road to your dating destiny.