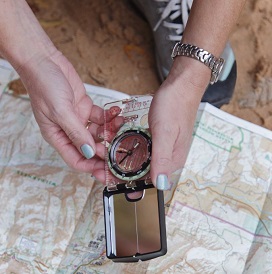 “I’m interested in working on my intuition,” Gemma, a long-time client of mine, said. “But I’m not sure how to practically use psychic skills in everyday life. I mean, how do you use your superpowers when you aren’t actually doing readings?”

There are a million ways I use my psychic “superpowers” in my life, but one of my favorite methods is asking my spirit guides for assistance and then looking for signs from them.

When I told Gemma this, she seemed skeptical.

“Signs—you mean, like omens? Blood raining out of the sky and all that stuff?”

“No,” I laughed, “just little nudges to help you make decisions, find comfort, or know you are on the right track.”

Signs are one of the simplest—and most fun—ways to communicate with your spirit guides or the Universe. Plus, they present a great opportunity to exercise your intuition or expanding psychic abilities.

A sign can be literally anything. In movies, psychics are often portrayed as seeing ominous, special-effects generated signs that something bad is going to happen. In myth and literature, seers would read signs in the way birds flew, how the sea looked, or the way the wind blew. Early divination was the reading of signs or portents, and in a way, you can look at using Tarot cards as reading the signs that the cards present.

But in everyday life, a sign can just be a code word that you set up with your guides or a “random” occurrence that happens to answer a question or point you in the right direction.

Gemma was excited to try using signs. As part of her developing psychic awareness, she had been working with a spirit guide she’d met through a meditation. Now she wanted to use signs as a way to communicate.

First, she needed to set up the sign with her guide. She used journaling to communicate with her guide each time she wanted to work with him (in the form of automatic writing), so she asked him to give her a way to communicate when she was out in the world. The answer that came through was “lion.” She wasn’t too sure what that might mean, but I suggested that when she needed to hear from him—and wasn’t in a space to write—that he would show her a lion. Word, picture, real life item—she just needed to know that a lion could signify a message from her guide.

“Just try it out,” I suggested. “And be playful with it—don’t try to make life or death decisions with this new tool or you’ll be too stressed to see the sign anyway.”

Gemma had her first sign sighting while nervously waiting for a job interview. She silently asked her guide for help. While leafing through a celebrity gossip magazine, she saw a full page ad for a film produced by a movie company with a lion in its logo. She was so startled that she laughed aloud. She knew it was a sign that her guide was with her and that she could just calm down. She did well on the interview, and they offered her the job.

Another instance occurred when she was trying to decide between accepting two date invites on a dating site. She playfully asked her guide to weigh in. As she delved deeper into the profile of each man, she noticed that one had a lion tattoo on his arm. She chose him, and they’ve had a few successful dates.

Then Gemma reported another experience. She had been walking downtown, pondering a serious situation with a girlfriend. There was a question of possible domestic abuse and Gemma was worried for her friend. But what to do? As she waited at a traffic light, a bus lumbered past with an ad. The words “don’t guess, ask” appeared in giant type. Intuitively, she knew that the Universe had prompted her with a sign. She followed through and found her instincts were correct. Now she is helping her friend transition out of a scary situation.

As you can see from Gemma’s experience, learning to receive signs doesn’t have to involve years of rigorous training, being clairvoyant, or even being in a meditative space. And though Gemma wondered if the signs were “real” in the beginning, she soon realized that reality, as such, had nothing to do with it. The power in receiving and using signs is in the deciding to do so. You perceive the importance and the meaning from the external source with your intuition, much as you would from just “going with your gut” or “having a feeling.”

Receiving external signs is the first step to establishing a concrete connection with your spirit guides and expanding your own intuition. Some people move from external signs to internal intuitive guidance; others go in the opposite direction. Either way, learning to see signs is fun and helpful in stressful times. Why not try expanding your conscious awareness to include this form of Divine communication?

Want to work with spirit guides? Feel like you are receiving signs but not sure how to interpret them? An advisor on Keen can help—call today!