Madness in March: Sports Psychics and the Danger of Easy Answers

Home /Psychic/Madness in March: Sports Psychics and the Danger of Easy Answers
Psychic | 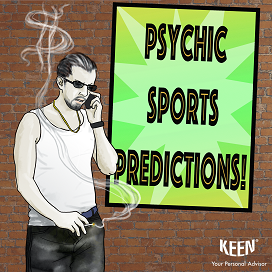 It’s strange how we can take something joyful and blend it with such sorrow and sadness. Take the NCAA tournament, which creates madness in March every year even among those who aren’t huge basketball fans. On one level, we all know that the great happiness that comes with a team pulling off a miracle win is balanced by the agony of the defeated team. But that is the thrill of competition, and it’s why we watch. The sorrow is part of the tapestry. For some, though, the sorrow is just tangential to the thrills that come from gambling.

We get that every year. There is nothing wrong with the office pool, daily fantasy, or another form of sports betting if you can afford it and are rational about it. But for some people who are desperate and are gambling to make up for losses, this can be a terrible time. Many turn to fraudulent advice—perhaps from an ex-coach with the betting hotline or spiritual advisors offering a quick fix. But there is no quick fix, and that isn’t a legitimate use of psychic ability. Psychic advisors are here to help guide people through life in the only way possible: self-exploration, discovery, and a process of healing. That’s the true power of spiritual advisors, whether you are talking about anything from a huge life decision to problem with a relationship.

Trying to Get Off the Hook

Every year during the NCAA tournament, you see newscasts turn to sports “psychics” for their picks, and every year, the picks are just as random and happenstance as anyone picking blindly. To be fair, they are also about as accurate as the so-called “experts,” and that’s the point: basketball, like most human endeavors, is ultimately unpredictable.

But that doesn’t stop people from thinking that a quick fix is in their best interest, that if they play their cards right, they will solve their problems with debt or be able to buy that new car they always wanted. They have the hope that, if a basket goes in here, someone misses a shot there, or a ball bounces off an unfortunate foot, their lives will change.

So they pore through the experts, look through all the websites, and talk to everyone they know. I have received calls from clients asking if Wisconsin has a shot at the Sweet 16 this year, because, they feel, that will help them be whole. That a win will fill that void by providing some material gain. I always have to tell these people that isn’t how this works. I don’t know if Wisconsin can make it (turns out: yes). But I do know that whether they win or lose, there is a deeper problem and one I can hopefully help with.

Recently, I received a call from Jim. Jim wasn’t happy, he told me. He was miserable at a middling job and had no real dating prospects. Nothing had really worked out. He had spare money, and was living in his one-room apartment, eating soups and microwaved foods, and seeing friends occasionally. It wasn’t that he was depressed. He was just in a rut. But, he thought, he had a solution.

He had been saving for a while and wanted to bet on a big game. He figured that if he won a big bet, he would have enough to quit his job and move to another city. He had been wanting to move to a smaller town near Lake Superior and try his hand at writing but never thought it was right. If he won the money, he assumed, it would be a sign, and he’d have a bit of a safety net. So he asked me if I thought his bet was a safe one.

Of course, I told him—that’s not how this works. I couldn’t help him with that. He was initially upset. He just wanted me to “predict” the outcome, but that could have been a coin flip. Instead, I wanted to talk to him as a human, to find out more about him, to read him.

In our reading, we talked about his past. The Tarot cards that were coming up indicated unhappiness with prior decisions, which led him to where he was. Without even realizing it, Jim had managed to set a trap for himself. He was scared to make a move because other moves hadn’t worked out perfectly. He didn’t even realize the walls he was building around himself. He convinced himself he was where he belonged, rather than confronting past failures, understanding them, and attempting to move forward.

We also uncovered why he was so unhappy with relationships. He didn’t trust himself to make the right decision. He sabotaged relationships early on to avoid letting someone down later on. Jim had subconsciously convinced himself that everything happened the way it was destined to and that he needed an incredible break, the divine providence of a bet gone good to shake out of it.

That wasn’t the case. As with so much else in life, there isn’t a quick fix or an easy solution to a problem. There is only the first wisdom of the Delphic Oracles: know thyself. Understand what is happening in life, and make the decision to change it. With knowledge comes power. Jim saw the traps he had set for himself and made a conscious decision to work out of them, no matter what. He, of course, hadn’t decided to move to the Upper Peninsula, but he had taken the steps that would allow him to make a decision rationally and in an enlightened state, rather than be sodden with fear.

All good things come with sadness in life. But joy doesn’t have to hinge on random outcomes or the whims of chance. With spiritual advice, we can take control. We can forge our destiny. We can walk together down the chosen path.

If you’re looking for spiritual guidance to help you with any of life’s struggles—from relationships to major life decisions—advisors at KEEN.com can help.

Keen Editorial Staff
Keen's Editorial Staff is made up of world-class writers, astrologers, psychics, and advisors with diverse experience and spiritual sensitivity.
Should I Retire? Find Your Identity Outside of Work With the Tarot
Spiritual Advice to Explore Polyamory Relationships – and Yourself