Spiritual Advice to Explore Polyamory Relationships – and Yourself

Home /Love/Spiritual Advice to Explore Polyamory Relationships – and Yourself
Love | 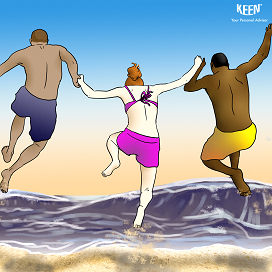 Allison had a problem. Rather, she had two problems, or possibly many, or maybe none at all. From a certain point of view, she admitted, she had at least two positives. Allison and her boyfriend Malik had agreed to a polyamorous relationship, meaning they were open to being in relationships with other people but still together. She was currently also seeing Ryan, for whom she didn’t have much in the way of feelings, but she had a good time with him. Malik didn’t seem jealous, but she was crazy jealous of anyone he was with, and she felt guilty for it. Had she bitten off more than she could chew? Was polyamory crazy? Or was there something wrong with her for not being OK with everything in this arrangement?

In 2016, alternative relationships are becoming more and more acceptable, and more open. What used to be called “swinging” is now considered a viable lifestyle choice, but it has not yet gained total acceptance. People are confused about what love and sex mean these days, what a relationship should be, and what their feelings are. Some of that confusion is a normal result of the breaking of old norms, and who the person is. That’s why so many people are looking for spiritual guidance, and the wisdom of Tarot readers, psychics, and other professionals to help find out more about themselves, and their role in a new and sometimes confusing world of romance.

Why Polyamory Is Popular

To begin, we need to get a few definitions straight. Like anything else, terms and language matter. Polyamory is not just dating around and not being serious with anyone. Nor is it an “open relationship,” in which both sides have an agreement that they are allowed to see other people, but in more of a no-strings-attached way. In an open relationship, they can or cannot talk about their flings, but they are in one committed relationship.

In a polyamorous arrangement, the parties are in more than one committed, serious relationship. It is different for everyone. There could be three or four or more people in a joint relationship, or each partner may have a serious relationship in addition to their central one (which they consider to be the “main” relationship; this is what Allison and Malik had). Some people don’t consider anyone their primary partner but have multiple equal relationships. The heart of polyamory is not mathematical and combinatory; it is emotional and relies on openness and honesty.

Having multiple partners has gotten more popular for a number of reasons, including the rise of evolutionary psychology, which is the study of the brain as a physical organism that evolved in a specific way. An offshoot of this branch of science is the idea that monogamy is unnatural, that we evolved to have multiple partners for a viable reproductive strategy, and that monogamous relationships are just a societal imposition, and possibly not better than the alternative. There are many who say that polyamory is healthier and more human, in an honest way. Advocates say that acceptance, rather than burial, of our natural urges is better for you, and leads to less jealousy.

However, in some ways, it doesn’t matter if it is natural or not, or healthy or not. It doesn’t matter, on an individual level, if monogamy is just an imposition of society: After all, we all live in and our products of that society. That’s what Allison believed. She could, and did, make the case that if everyone was polyamorous, and we all lived that way, things would be better. But the fact is, we don’t, and that made it difficult for her to emotionally accept a lifestyle she intellectually believed in. So, she called me to find out why it was this way, and why she felt the way she did. Turning to spiritual advisors in a time of confusion is the best course of action — one that is natural and healthy.

Allison explained that she sometimes felt guilty when she was with Ryan, and more and more, she felt guilty when she went home to Malik (they shared an apartment, which was off-limits to other partners). When she was there, they did everything normally — made dinner, laughed, watched Netflix, chilled, and so on. But she worried she asked too many questions about his girlfriend, Sasha. He got a little annoyed because he felt like she was prying. He would sometimes get mad and ask, “What’s wrong with you?” That was the question she asked me: “What’s wrong with me?”

The short answer was “nothing.” What she was feeling was normal, and while Malik had a right to be upset if she was breaking the “rules,” he should know that, as in any relationship, rules and norms are under constant renegotiation. That’s only fair. And just as people in traditional relationships shouldn’t judge those in non-traditional ones, those in the alternative lifestyles have no right to make anyone feel bad about having second thoughts or feeling confused. That’s normal.

But the short answer only gave temporary relief. The truth was that we had to learn more about why she was confused. Over a series of readings, we discovered more about past relationships. She had never trusted a boyfriend not to cheat, mostly because she always felt pulled away, crushing on others, and fantasizing about being in a different relationship. She had always had one foot out the door. That’s why polyamory appealed to her in the first place, but as we realized, it was also triggering these feelings of guilt because that is what she was used to.

We discovered that she felt guilty because she had trained herself to feel guilty just for imagining herself acting this way, so when it was an option — and one that should be guilt-free — it brought back what she expected. And for her, the flip side of guilt was suspicion. So she always felt that Malik was doing something wrong, a cold heat throbbing in her gut, even though he had not just permission, but actual encouragement, to explore.

Understanding this didn’t make those feelings go away, of course, but it made them manageable. Now, the question was for her future. If she wanted to make this work, she would have to let go. The jealousy and guilt may have been, on one level, irrational, but it didn’t make them less real. Looking into her future, the cards seemed to indicate that she and Malik would be together for a long time, and that, while there were clouds, there was always sunshine underneath. Other paths seemed less certain. She might always have the twin pulls of jealousy and guilt no matter what kind of relationship she was in, so she realized it was better to be in one that did mostly make her very happy, and hope that these feelings would subside as she became more used to it.

Everyone is different, and that’s the point. We all bring different cultural, familial, personal, and experiential baggage into any relationship, and they are all, at times, confusing. No matter what, a successful relationship entails knowing yourself and knowing why you feel the way you do. You can’t be with another person — or two, or three, or eleven more people — without fully knowing who you are. That’s why people turn to spiritual advisors like me. The idea of a relationship may change, but people don’t, and neither does the fundamental spiritual wisdom that has guided us since we became human.

If you need spiritual guidance and advice about a polyamory or any other type of relationships, advisors at KEEN.com can help.

Keen Editorial Staff
Keen's Editorial Staff is made up of world-class writers, astrologers, psychics, and advisors with diverse experience and spiritual sensitivity.
Madness in March: Sports Psychics and the Danger of Easy Answers
3 Signs that Your Spirit Guides Are Trying to Get Your Attention