Should I Retire? Find Your Identity Outside of Work With the Tarot

Home /Tarot/Should I Retire? Find Your Identity Outside of Work With the Tarot
Tarot | 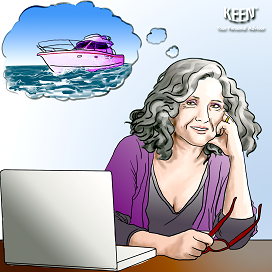 For many of us, life can be defined by work. It dictates our days, weeks, and years. Even if your job is fulfilling, there are few of us who don’t look forward to retirement. It’s a chance to finally reap the rewards of a life of hard work. We might travel or find a new hobby or relax. We pick up that book we always wanted to read — or write. It’s a time of discovery and promise, and with longer lifespans, we have more time than ever to enjoy the fruits of our labors.

Unfortunately, deciding when is the right time to retire is also a tricky decision. A longer lifespan means needing to save money. We have to deal with complicated questions like finding the right IRA or learning just what a fixed-index annuity is. There also is the question of identity: After a lifetime of working, who are we when we stop? That, for many, is an even bigger concern than the monetary ones. That’s where the power of the Tarot can come in: it can help you make a decision that isn’t just about what you do, but who you are.

Stepping Back from the Job

Dee loved her job. She and her husband lived in a college town in Illinois, and she was the station manager for the local public radio and TV stations. Both stations were the biggest in the area, and thousands of people listened and watched every day. She was part of the life of the community, and was involved in all the cultural and artistic events. It was a fulfilling job but also a very stressful and time-consuming one. She was in her 60s, had put two kids through college and helped them with their weddings, and was thinking of retiring.

There had been a few changes with management and personnel at the stations, and things were getting irritating at times. But at the same time, she loved being involved. People always were asking her what was going to play on the classical music show on Sunday, or what was going to happen on the next Downton Abbey. So when she called me, she had mixed feelings. She liked being part of the community at work but wasn’t sure she wanted to keep working.

That is a fairly normal problem. So I did a three-card Tarot reading — focusing on the past, present, and future — to get a sense of what she could expect if she decided to retire now.

The first card I drew was the King of Wands. On this card, the king sits on his throne, looking slightly into the distance, confident in his kingdom. He is a king who builds, and who knows that creating something incredible is a process. He is wise, honest, and conscientious. When in the past position, he indicates that a foundation has been built and that the past has been a wonderful prolog for what is coming next.

For Dee, this meant that she wasn’t bound to the past, nor that her best days were behind her. Like a skyscraper climbing toward the heavens, everything she had done in her life was the addition of a new story and one that could build on the last. She wasn’t defined by her job, nor was she defined by successes she had five or 10 or 20 years ago. She would continue to grow based on a strong past that led her to become the woman she is now.

The Eight of Swords was a strong second card for Dee. It shows a woman who is bound, blindfolded, and surrounded by eight swords. She is trapped — but it indicates that the bondage is not permanent. She can be free, but only she can let herself go. Indeed, the Eight of Swords in the present position often represents denial, the kind of cognitive dissonance at which humans excel. The blindfold is one that we put on ourselves. It’s not a dark blindfold — it’s one with a pretty scene painted on the inside, keeping us unaware of the fires outside. But we can take it off.

Dee resisted this at first, but as we talked, more information about work came out. She didn’t get along well with the new president of the radio and TV stations. He came from a much bigger station in a bigger city out West, and he had different ideas — not necessarily bad ones, but very different ones. These ideas were not in sync with how the stations had done things. Funding was was becoming an increasingly important issue, and it was taking up more and more of Dee’s time. These days, it seemed like she spent more time fighting with the president about social media than engaging with the community directly. None of this was bad, but it was different. The job she loved was largely gone, but her love for it blinded her to some of the realities. The Eight of Swords showed her the blindfold, which allowed her to remove it.

The Ten of Cups card shows a husband and wife dancing under a rainbow while children frolic happily nearby. This is a powerful card in the future position, signifying that emotional contentment is coming. It signifies that your true happiness in life is ahead of you and that the path you are on can lead you there. It is fullness and richness. It is the joyful parts of life.

For Dee, this was a great sign. She knew that she and her husband would be well off financially — they had saved, and they had good pensions and 401(k)s. And, she knew their kids were happy. She realized that she didn’t need her job to be happy, content, or feel like herself. She could still be part of the community, maybe even more so. She was ready to take adult learning classes — there was one on James Joyce she had her eye on — and could participate more in the local choir. She would start playing piano again. She and her husband could spend more time traveling, seeing the kids, going to dinner, and reading.

This Tarot reading was the final piece Dee needed to ultimately decide that now was the right time to retire. It helped her see that her job didn’t define her and that she had many new chapters of her life to write once she walked away from her job once and for all. In life, we look for things to define us: work, accomplishment, children. But in the end, we write our own definitions. We are the authors of our personal dictionary, and Tarot readings can help us find the words.

If you’re contemplating making a big life decision, like retiring, and need guidance through the Tarot or other spiritual advice, contact advisors at KEEN.com for help.

Keen Editorial Staff
Keen's Editorial Staff is made up of world-class writers, astrologers, psychics, and advisors with diverse experience and spiritual sensitivity.
Psychic TV Shows Reveal Our Real-Life Need for Spiritual Advice
Madness in March: Sports Psychics and the Danger of Easy Answers