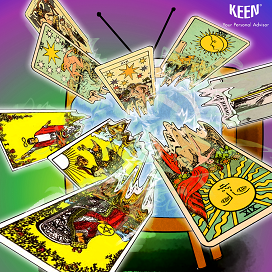 In the recently-concluded USA comedy Psych, James Roday plays Shawn Spencer, a psychic working for the Santa Barbara Police Department (SBPD). He’s a young goof-off, a smart alec slacker, and, most notably, a fraud. He isn’t actually psychic. He is just a brilliant observationalist and a natural detective, but he knows no one would take him seriously, so he pretends that his deductions are visions. Naturally, people go along with this. They believe him because they want to believe him.

In a way, Shawn is the stand-in for every fictional show that has featured a psychic, and the rest of the SBDP are the stand-ins for all of us. These shows are popular because, in a time of confusion and tumult, with new sources of knowledge and information pouring at us from all angles, and new orders overthrowing old ones, there is a deep and real need for the steadiness of spiritual advice. We look for wisdom that has guided us for millennia, and a connection to something greater than us. That search has been reflected in television and other pop culture phenomena.

How Psychic TV Shows Came to Dominate the Format

In the last 10 to 15 years, we’ve lived through what pop culture experts define as two different eras. The first was the “Golden Age” of TV, in which a handful of shows brought the medium to new heights. These were largely shows about men who were troubled and did bad things; the age of the anti-hero. But through that era, there was a counterprogramming rise, especially about intelligent, spiritual, and intuitive women who used their gifts to help people.

Two of the dominant shows of this era were Medium with Patricia Arquette and Ghost Whisperer with Jennifer Love Hewitt. Medium’s Allison DuBois (Arquette) used her powers to fight crime, helping the police solve cases they couldn’t figure out. Her powers went deeper than that, though. It wasn’t just a “Whodunnit?” storyline every time. The show looked at real human relationships, and how her ability to understand people could help them with problems in their lives.

In Ghost Whisperer, Hewitt’s character, Melinda Gordon, helped spirits with unfinished earthly business. She had visions, and whether it was to solve a murder, connect with a lover, or pass a message to a child, she guided people who were gone to finish their missions and goals in life.

We are now past the so-called “Golden Age” of TV and in the era of “Peak TV.” That’s where there are so many high-quality shows on that no viewer can watch them all. One thing that is notable is that the era of the brooding male anti-hero has passed. It has been replaced, in large part, by a desire for the fantastic and the meaningful, for the kind of wisdom offered by the spiritual counterprogramming of Medium, Ghost Whisperer, Angel and others. Hit shows like The Vampire Diaries, Game of Thrones, and all the Marvel spinoffs have prominent characters who have visions, who can commune with the dead, and who serve as spiritual guides to other characters. Shows like Sleepy Hollow, Grimm, and other revised fairy tales, are full of ancient wisdom and dominate this era.

What Pop Culture Tell Us About Spiritual Thirst

There’s a reason the pendulum has shifted from Golden to Peak, and why shows that reward a belief in the unknown are so popular. It’s because, over the last 15 years, everything that was stable has been shaken. The economy is unreliable, institutions have been shown to be even more fallible, incomprehensible global violence has become routine, and the internet has shown itself to be, in part, a vehicle for unleashing cruelty and anger because someone disagrees about the color of a dress and on more important issues.

As is often the case, pop culture is a reflection of our fears, anxieties, and desires. With everything changing, we have a need for something to be real and to be right, for guidance in a confusing world where everyone has a real identity and an online one, and where what seems permanent today could be just a memory tomorrow.

Into that void steps spiritual wisdom, advice from psychics, Tarot readers, mediums, and others. This is wisdom that has behind it the weight of time, far heavier and more profound than a glimpse on Snapchat. People who have serious and important questions about life don’t want just to check Twitter—they want to receive knowledge from a field that has been around since we first started drawing on caves and telling stories.

One thing I’ve noticed here at KEEN is that the proliferation of spirituality on TV has drawn more people into the world of higher wisdom. I remember receiving a call from a young man who was having a difficult time reconciling his guilt over a bad relationship with his brother, who had recently been killed in a car crash. He noticed all the shows on TV where mediums and others helped people with a similar problem and thought that if there are so many shows, there must be something there—something that matters to people.

When he called, he wasn’t expecting to have communication with his brother. Honestly, he wasn’t even sure why he called, except that if so many people evinced a need for help on this level, then he owed it to his troubled soul to pursue. Using the wisdom of the Tarot, we walked through his complicated relationship and his troubled past. We wandered through the issues that had been plaguing him for years. Together, we helped him find a measure of peace. It wasn’t just like TV, but the shows he saw helped open him up to another avenue of knowledge.

Pop culture eras come and go. Somewhere, a young intern at Buzzfeed is working to name the next phase of TV (“Post-Peak Deluge” or something). But it seems certain that, whatever the era, it will be populated with shows reflecting our quest for certainty in an uncertain world and for wisdom that is beyond the momentary. Our need for that will persist for as long as humans have questions about life, love, and our place in the world. And, regardless of who is winning Emmys, psychic and spiritual wisdom can help provide the answers.

If you’re looking for spiritual guidance to answer any question, advisors at KEEN.com can help you find the answers.

Keen Editorial Staff
Keen's Editorial Staff is made up of world-class writers, astrologers, psychics, and advisors with diverse experience and spiritual sensitivity.
How to Develop Your Clairvoyant Powers in 5 Steps
Should I Retire? Find Your Identity Outside of Work With the Tarot