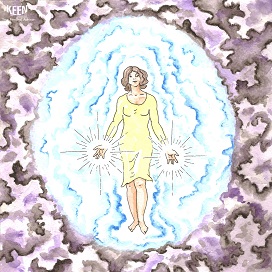 The idea of “psychic attacks”–the ability to cause harm or drain energy from another person via some form of mental telepathy–may seem like something out of a science fiction movie, and yet, many people (reputedly including military intelligence agencies from several nations around the globe), believe that focused negative energy not only exists, but may actually cause verifiable damage to targeted individuals. It’s said that both Russia and the  U.S. Military have been experimenting with various telepathic techniques to influence adversaries since the Cold War days. (1) Most psychic attacks, however, fall into the category of personal motivation, rather than political intrigue.

While personal psychic attacks can be set into motion through conscious effort by one individual actively seeking to harm another, they can also be the result of the machinations of the subconscious mind seeking to redress deep-seated feelings of hurt, jealousy, anger, and injustice, whether real or imagined. As a result, psychic assaults can emanate either from an enemy who is intentionally seeking to inflict mischief, or conversely, a close friend or family member who may be blind to the draining effects their own negativity is having on those around them.

In cultures with African-based tribal traditions such as voodoo and “black magic,” as well as aboriginal societies in places such as Australia, China, and South America in which witchcraft is still practiced, psychic attacks usually take the form of curses and spells designed to bring supernatural forces to bear, and direct negative energy (often manifested in spirit form) to infiltrate and disrupt the target individual’s personal energy field–resulting in calamitous consequences.

Even in more scientific-based cultures, there are still those who believe that evil truly does exist in the world, and that there are dark elements lying in wait for any opportunity to infiltrate an unwitting host to drain them of their life force, and place them in their thrall. In a Judeo-Christian context, these dark forces equate to the devil and lesser demons, whose sole purpose is to subvert mankind away from “the light” of salvation. (Surrounding oneself in “white light,” whether referencing traditional faiths or alternative belief systems, is one way in which those seeking protection against psychic onslaughts can erect a barrier between themselves and their attackers.)

One form of spiritual attack that has been gaining increased notoriety in the modern vernacular is the “psychic vampire.” These “spirit suckers” are individuals whose overwhelming negativity drains the life out of any room, and wreaks havoc on anyone with whom they come into contact, whose own spiritual defenses are not adequately beefed up to assure self-preservation.

Are You Experiencing Psychic Invasion?

No matter the source of spiritual aggression, there are things that you can do to protect yourself from the psychological and even physical damage that can result from a psychic attack. The first step in reversing negative influences is to recognize the signs that you may be the victim of psychic assault. This list of symptoms is only a guideline, and of course, these manifestations may be due to many different factors, including health-related issues totally unrelated to psychic intervention, so if you’re experiencing any or all of them, it’s wise to first consult with a medical professional, prior to seeking the aid of a trusted spiritual counselor.

• The sudden onset of the inability to think or reason clearly

• Feeling chilled, no matter the temperature

• Sensing a presence, or seeing something in the shadows that disappears when you try to get a better look

Protecting Yourself Against Psychic Attacks

So, if you think you’re under psychic attack, what can you do about it? There are a number of ways in which you can protect yourself. As with any spiritual practice, like with a personal tarot reading, it may take a bit of trial and error to find which method is most comfortable for you.

Gemstone Therapy: These elements can either be purchased in powdered form and mixed with water to create a spray that dissipates and deters dark energy, or used in rock and crystal form that can be worn as an amulet or kept on hand to ameliorate the psychic ambience of your home or office. Amber, Hematite, and Zincite are also powerful for keeping yourself grounded. Crystals and stones will have to be cleansed and re-energized from time to time to maintain maximum effectiveness.

Meditation and Affirmation: Daily prayer and meditation that include personal affirmations are great for strengthening your psychic self-defense mechanisms. Breathe deeply and focus on clearing yourself of all negative energy. Picture yourself surrounded by white, healing light, and imagine that all negative influences are flowing down and outward, to be absorbed and healed by Mother Earth.

Consult a Professional: Some energy workers are proficient in reading auras, while others are skilled at ensuring that your chakras are working to the best of their ability. If you think you’ve fallen victim to a psychic attack, or are just feeling “blocked” from reaching your full potential, these trained individuals can help rid you of negativity that may have attached itself to you, and put you back on the path to health and fulfillment.

Have outside forces put a dark spell on you? Let a KEEN advisor help you get clear now, and teach you to protect yourself from future psychic attacks.