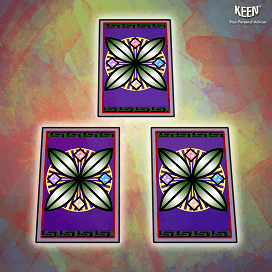 “I’ve just got a half hour,” Molly said. “Can we do a reading about my relationship in that time?”

“I don’t think I can process a great big reading,” Janae sighed. “Could we just use fewer cards to look at my issue?”

“I’ve never gotten a Tarot reading before,” Patrick said. “Do you have, like, a beginner reading?”

The answer to all of these questions is, yes! Whether you have limited time, don’t want to deal with complex layouts, or are just getting your Tarot toes wet, three card spreads are the perfect solution. And, if you are learning to read cards, playing with three card spreads is a great way to build confidence and get familiar with the cards.

Although I often work with complex spreads for relationships, in Molly’s case, we just didn’t have time to work with ten or more cards. This spread allows you to cut to the chase and is a great way to start before doing deeper exploration about the relationship later.

The spread is simple. You use three cards that signify the following positions:

Molly’s question was: We fight all the time, just like my mom and dad. How can we get along better?

The first card, representing her, was the Five of Cups. This showed she was indeed feeling sorrow and regret about the arguments, but there was also a sense of giving up. She needed to realize that there was still potential in the relationship, and, while it was okay to acknowledge her sadness, it would be more helpful to move forward into finding solutions.

The second card, representing her boyfriend, was the Seven of Wands. This card doesn’t show what the other will do but rather the energy they are bringing into the situation. This card clearly showed that he felt a need to defend his position in the relationship. This was the root of the arguments, from his perspective, and quite possibly was related to a feeling of dissatisfaction about the direction of the relationship or his role within it.

The third card was the Ace of Cups. I felt this was a good sign for them because it showed they needed to find a new way to deal with emotionally charged situations in their relationship. And, if she was willing to draw upon her own intuition and sensitivity, the solutions would be easily found within her. Both of them needed to be more emotionally open and address their communication patterns with a beginner’s mind. The relationship offered potential for emotional growth if they were willing to embrace it.

Janae was a regular client of mine, and I knew she was often overwhelmed by the sheer amount of energy we could gather in one reading. Three card spreads were perfect for giving her great guidance in digestible chunks.

Janae had a question about dealing with persistent money issues. The three cards we drew signified:

The first card we drew was the Eight of Swords. We talked about how she might be in denial about her financial situation and, if she wasn’t willing to look at reality head on, then she wouldn’t find her way out of a seemingly hopeless situation. The blindfold on the woman in my deck symbolized, in Janae’s case, her unwillingness to see her money situation for what it was.

The second card was the Eight of Cups. The cause of her money woes was a stagnant relationship with money itself, probably dating back to childhood. Janae admitted she had a lot of limiting beliefs around money but didn’t think she had the power to change them. Drawing this second Eight was also a hint that, overall, the money question was a place of old energy that needed clearing.

The third card was Death. The solution here was that she had to release the limiting beliefs and let her old way of dealing with money completely die so that she could have a rebirth of abundance. She admitted to needing more coaching in this area, so we set up a package of sessions for me to help her work through her money beliefs.

For newbies to the Tarot world, it’s nice to start with a three card spread to keep confusion at a minimum. Patrick was shy about asking questions, and he settled on getting guidance for a choice he needed to make about his job. The three cards we drew represented:

The first card was the Seven of Cups—tricky because this card is inherently about choice. In this instance, I advised him to be clear about what benefits option one would really bring him and make sure he wasn’t making up fantasies about the possible promotion. He needed to keep his feet on the ground and allow reason to team up with emotion when thinking about this option.

The second card was the Four of Discs. Here there was an opportunity to grow his power base and find some stability. The danger was that, if he would be better served by risk, this choice might be too conservative and not bring him the breadth of knowledge he really needed.

The third card was the King of Swords. To make the best choice, he needed to rely on his wisdom and intellect by cutting through emotional resistance to success. Which choice would win if he applied all the experience of his years and his critical thinking skills?

Three card spreads really serve a variety of issues and questions. And don’t let yourself be limited by the layouts here! You can make the three cards mean anything you want; just make sure you are clear on your frame of reference for the reading before you start.

Doing this kind of reading will build your confidence as a reader. As a client, you can see how the three cards hone in on the issue and provide clear, simple instructions for how to proceed. Three card spreads take less time to lay out, read, and interpret, so they are the perfect choice if you are tight on money or time but still need answers.

Advisors on Keen are sure to have three card spreads in their toolbox. Get the clarity you need, fast, so you can move forward. Call a Tarot advisor today!

Keen Editorial Staff
Keen's Editorial Staff is made up of world-class writers, astrologers, psychics, and advisors with diverse experience and spiritual sensitivity.
We couldn’t have done it without you…
How A Psychic Can Help You Understand Your Dreams